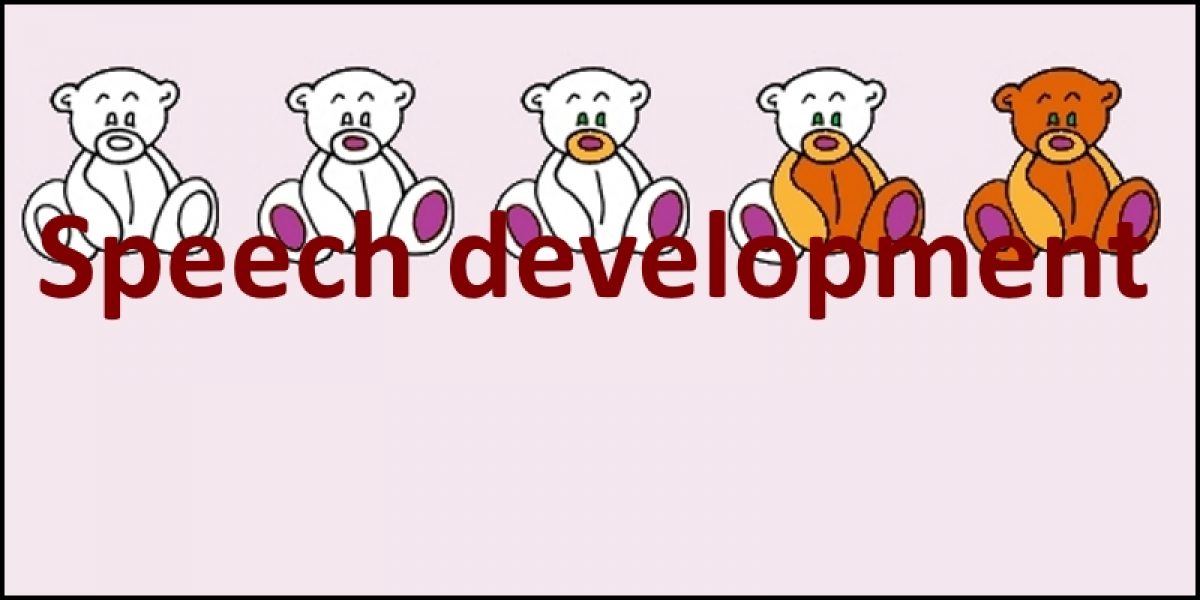 Up to the age of one or two months a baby will cry lustily when uncomfortable or hungry and coo when content. They will also vocalize in response to seeing their mother. Between one and six months a child will produce a whole range of sounds, many of which are non-English, i.e. they don’t appear in English speech as spoken by adults. As they approach six months of age, however, these sounds become more differentiated and recognizable as English speech sounds. At first, it is the vowels that are produced and practiced more readily. These are then followed by the emergence of consonants produced in isolation, i.e. on their own without any other sounds being attached.

At around six months of age the infant reaches what is known as the babbling stage when the child engages in sound play by stringing together sequences of single sounds, e.g. “mmm”, “bbb”. These are then followed by multisound sequences which involve adding vowels to consonants, e.g. “mamama”, “boobooboo”, and so on. Before the emergence of proper words, the child makes use of what are known as protowords. These are sequences of sounds that are used consistently by the child to express some meaning, e.g. “ba” may mean ball, “mi” may mean milk.

At about 12 to 15 months of age the child arrives at the One Word Stage when the child will speak 2-6 or more recognizable words spontaneously. The child will, however, demonstrate the ability to understand many more words than this by following simple instructions such as, “Show me the ball,” and “Give it to daddy.” The child’s vocabulary now develops at an extraordinary rate: so rapidly in fact that at 2;00-2;06 years the child may speak over 200 words and understand many more than this. This is the Two Word Stage and it is exactly as its name implies, the stringing together of two words to form infant sentences like, “ball gone,” and “mommy go.”

By the time the child has reached three years of age (the Three Word Stage) they will be able to recite several nursery rhymes, count up to ten, give their name, tell you if they are a boy or a girl and drive everyone to distraction by incessantly asking questions that begin with “what”, “where” and “who”. Indeed the child will be a proper little chatter-box. [read more about language development]

This development can be summarized under the following Stages.

The sounds used in this stage are simply the natural sounds that babies make, e.g. crying, coughing, burping, and swallowing. These sounds have no real communicative significance as such: the baby cries reflexively (reflexive crying) because he or she is hungry or uncomfortable; the child burps because of wind, and so on.

These vocalizations usually occur when the baby is comfortable and content. They are typically made up of vowel and consonant sounds.

At this stage the infant engages in longer and more continuous streams of either vowel or consonant sounds.

This is the stage most commonly thought of as being associated with language development. Most parents will remember their child passing through this stage. However, it is often regarded as consisting of two sub-stages: (1) canonical babbling, and (2) variegated babbling:

One type of canonical babbling is reduplicated babbling, in which the child produces a series of Consonant-Vowel (CV) syllables with the same consonant being repeated, e.g.

A second type is non-reduplicated babbling. This consists of vocalizations either in the form of Consonant-Vowel-Consonant (CVC) sequences, e.g.

Now there is greater variation in the sequences of syllables, creating so-called diverse babbling, e.g.

It should be noted that not every researcher will categorize speech development according to the stages set out above. For example, some do not make a distinction between non-reduplicated babbling and variegated babbling, as they both appear to be describing the same phenomenon, i.e. a reduction in the number of repetitive sound sequences and an increase in their variety. Because so much development is happening all at the same time around 10-12 months, it is difficult to unambiguously divide the development of speech into discrete stages.

However, up to this stage of development much of what the child produces is really no more than a sort of verbal play. The child is practicing individual sounds, and sound sequences, and gaining the motor skills necessary to produce what will eventually be considered actual adult words. It is this emergence of words at the so-called One Word Stage that signals the onset of linguistic development (see Language Development).

The words used by the child are now more readily identifiable as actual adult words. A variety of single words are used to express feelings, needs, wants, and so on. This is the stage at which, amongst other things, the child begins to name and label the objects and people around them. The following consonant sounds are usually well established at this stage:

The child now begins to produce two-word combinations such as daddy car, shoe on, where Katie. At this stage, the following additional consonants are consolidated:

Three Word Stage and beyond (28 months +)

The child extends their two-word utterances by incorporating at least another word, e.g. me kiss mummy, he hit ball. In reality children may add up to two more words, thereby creating utterances as long as four words.

Table 1. The Order of Acquisition of English Consonants

A number of comments are worth making regarding this proposed developmental sequence:

As in all walks of life, there are exceptions to every rule and this is no less true of the way in which children acquire speech sounds. Generally, whilst one would expect a child to use the front sound ‘p’ before the back sound ‘k’ there will always be the child who does it the other way around.

Plosive consonants are produced by a complete obstruction of the airflow from the lungs, by the lips coming together or the tongue contacting the gum ridge or soft palate. This is then followed by the explosive release of the air through the mouth as the two articulators part suddenly. There are six English plosives: ‘p’, ‘b’, ‘t’, ‘d’, ‘k’ and ‘g’. Plosives are short-lived, explosive sounds that cannot be sustained for any length of time.

In contrast, fricative consonants are produced by air from the lungs forcing its way through a narrow gap created in the oral cavity by two articulators coming into near contact, such that friction or turbulence is created. There are nine English fricatives: ‘f’, ‘v’, ‘th’ (as in think), ‘th’ (as in the), ‘s’, ‘z’, ‘sh’, ‘zh’ (as in measure) and ‘h’. Fricatives are relatively long-lived, continuous sounds that are capable of being sustained for several seconds. [click here for an explanation of English consonants]

We see that between 1;06-2;06 years (with the exception of ‘h’) the child is not consistently using any fricative sounds. Rather, six of the eleven consonants used at this age are plosives, three are nasals (‘m’, ‘n’ and ‘ng’), one is a so-called approximant (‘w’), but only one (‘h’) is a fricative. We see, therefore, that the ability to produce sustainable fricative sounds is a later developing skill.

Whilst many children will have consolidated the use of all the consonant sounds by the age of 5:00 years, it is not unusual for a child to be as old as 6;00-6;06 years of age before they may be fully capable of saying all the speech sounds an adult would use.

It is the so-called ‘whirlies’ that often continue to cause confusion for children. The ‘whirlies’ are the sounds ‘w’, ‘r’, ‘l’ and ‘y’ (called ‘whirlies’ because of the sound they make when strung together – ‘wrly’). Even up to 6;06 years of age a child may have difficulty signaling differences between these sounds, e.g. red is said as wed, lolly is said as yoyiy, and so on.