You are here: Home > Language > Holophrase 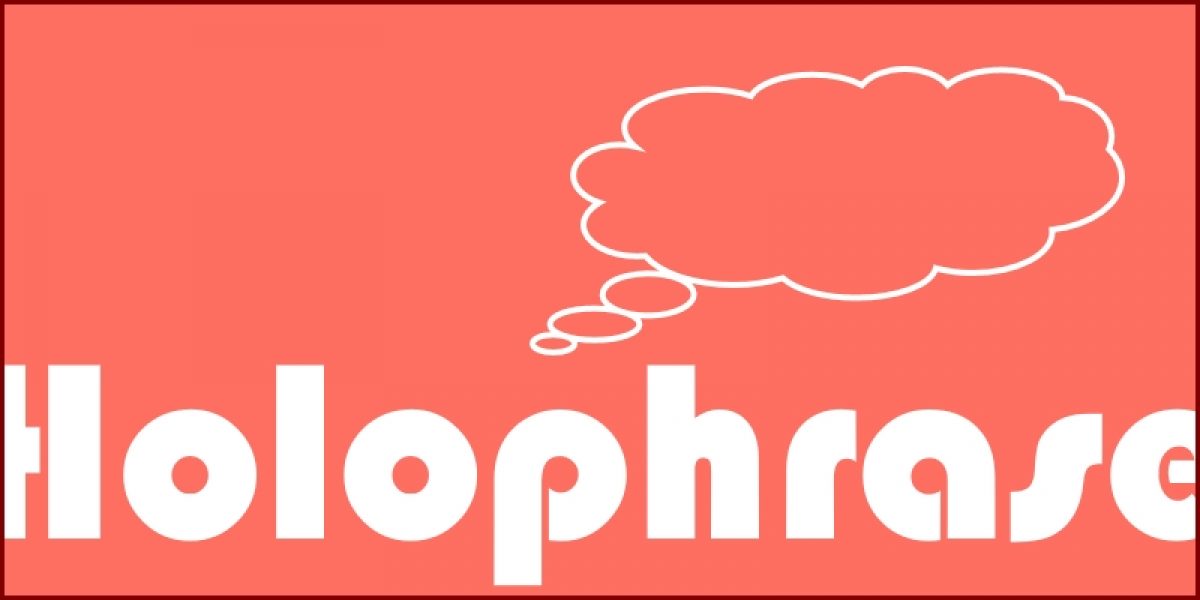 Recall that it is at the One Word Stage that we can appropriately talk about a child’s expressive language. Recall also that at the later One Word Stage (14-24 months) children begin to use a range of single words to refer to things in their environment or to actions, i.e. they have a referential meaning (see Language Development for an explanation of Word Stages). Now, consider the following interaction between a father and his 2;00 year old daughter.

Sequences like these are not uncommon, the young child repeatedly using just one word and the adult taking the burden of the conversation through a series of guesses until the correct response is made. Difficulties arise because, as adults, we tend to have fairly specific meanings for each of the words we use. For most adults mummy will probably refer to a female person. So if I say, ‘mummy’ you will most likely think that I am referring to this person.

In the above sequence, however, mummy had more to do with possession of an object than the name of a person, i.e. the child pointed to a hat that belonged to mummy and uttered, ‘mummy.’ Thus, in this instance, the word mummy is not referring directly to the person but, rather, to an object that mummy possesses – the hat. We would, therefore, describe this child’s utterance as having the function of possession. It is possible, of course, that the child could use the word mummy to refer to a person. Had the child intended this in the above sequence then the father’s first response, ‘that’s right, mummy’s coming home soon’ may have been correct. In this instance the word mummy would have had the function of naming.

Single words used by infants to mean many different things are called holophrases. For, although the child is only producing one word at a time, the words often have a composite meaning. We have noted, for example, that the word mummy could be used for naming a person or for indicating possession of an object. The confusion for the adult listener in interpreting holophrases arises, in part, because the child utters just one word and the adult’s interpretation of this utterance is largely dependent upon the context in which it is spoken. In our example, the child’s father only understood what was meant when the child eventually pointed to the hat, i.e. the child supported her utterance through the use of non-verbal communication. Some indication of the various meanings of holophrases may, therefore, come from the child’s facial expression, gesture, actions, and so on. Further examples of so-called semantic functions (such as ‘possession’ and ‘naming’) include the following:

The child may use a single word like more to indicate, ‘I want some more cheese’ or ‘I want you to play with me some more.’ Words that express the meaning, ‘I want…’ or ‘I need…’ are considered to function instrumentally.

A word such as car may have a regulatory function if its intended meaning is, ‘let’s play with the car’. Words are considered to have this function if they are interpretable as the child indicating to the adult, ‘do as I tell you’, i.e. they regulate an adult’s behavior.

This function is represented by words that can be interpreted by the adult as meaning, ‘let’s pretend’. So, for example, if the child says, woof! this may be intended to mean, ‘let’s pretend that we are dogs’.

There are many more functions than the ones I have described here but these few examples should give a flavour of the various meanings that a single word can express. It should also help to explain why adults often misinterpret the talk of children up to the age of about 2;00 years.

Another possible reason for adults misinterpreting infants’ talk is that some children use the same word to refer to many different objects. For example, the word dog may be used to mean all animals whether or not the animal being referred to is a cat, a horse, a pig, or whatever. This is known as over extension and it is common during the One Word Stage. In the same way that some children use a particular word to refer to many objects or people, others restrict their use of a word that could appropriately be applied to many objects, people, and so on, to only one or two things. For example, a child may use the word drink to refer solely to orange squash and not use the word at all to refer to milk, tea, lemonade, and so on. This is known as under extension and this is also a common feature of the One Word Stage.

The elegance of language development is that it is so logical. If I can express a meaning with just one word then, surely, I can express more with two? If I say mummy this may be ambiguous. But if I say mummy gone then the meaning is more specific. The two-word utterances that children produce are not, however, the product of random combinations of words. Rather, children are systematic and logical in the way they combine words to express meaning. Children appear to produce two-word utterances by relating so-called semantic categories. An explanation of this is beyond the scope of this article but a simple example to illustrate how this functions is as follows.

Children usually make a distinction between animate beings and inanimate objects. Animate beings are capable of acting voluntarily: each is an AGENT (e.g. mummy, daddy). Children also categorise ACTION words, e.g. kick, run, bark. Now, a common relation found in the majority of children between the ages of about 20-30 months is that of AGENT + ACTION, e.g. daddy go (where daddy represents an animate being (AGENT) and go expresses the meaning of an ACTION). Further examples include: dog bark, mummy run and bird sing.

Children will, therefore, extend the length of their utterances beyond the holophrase and up to the Complex Utterance Stage (see Language Development) in a similar fashion, by combining words drawn from relevant semantic categories.