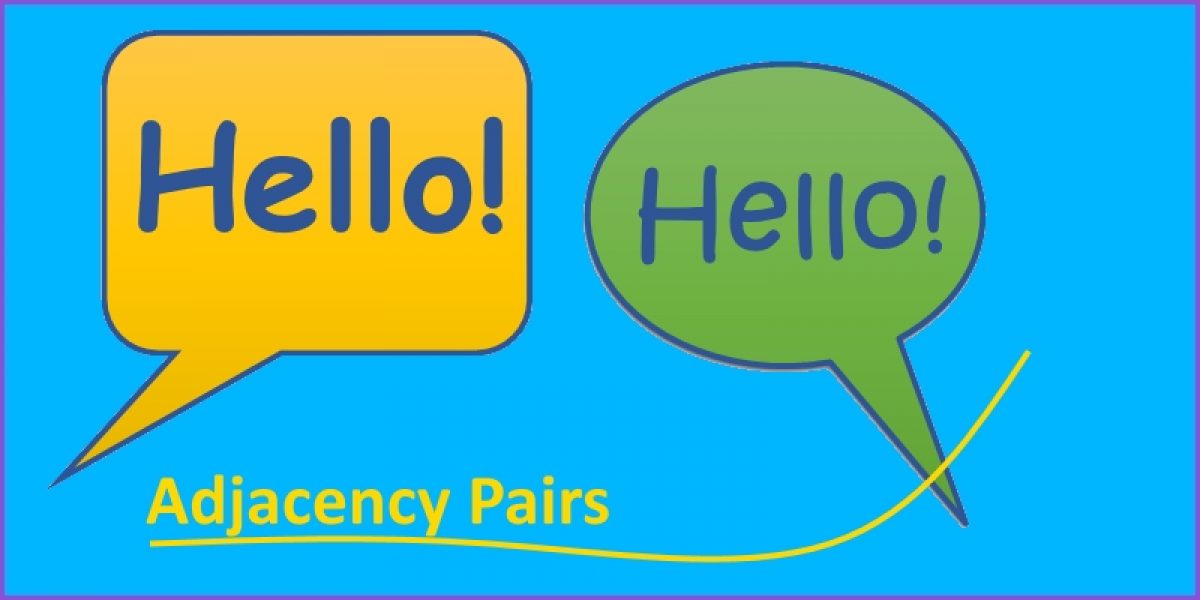 In the 1970s, Schegloff and Sacks (1973) noted that conversations appear to be made up of sequences of two utterances. They noted that the utterances are:

In addition, they pointed out that when the current speaker has produced a first pair part he or she should stop speaking and the next speaker should produce a second pair part at that juncture. These paired utterances are referred to as adjacency pairs and they appear to be a fundamental unit of conversation. To understand these characteristics better, consider the following simple example.

Here, the first pair part of the adjacency pair is the utterance hello in line 1. Now, this type of utterance may be defined as a greeting. The first pair part is, therefore, typed (as a greeting). We have noted that a characteristic of adjacency pairs is that they are typed so that a particular first part requires a particular second part. It should be self-evident that greetings are usually followed by greetings. Consequently, when the first pair part is a greeting then the required second pair part is also a greeting. It is relevant, therefore, that after a greeting is uttered the current speaker should stop speaking and the next speaker should produce the relevant second pair part greeting at that juncture. Failure to produce the required second pair part greeting would be noticeable to the interlocutors. In fact, in our example, John does stop speaking and Kath produces the relevant, and required, second pair part greeting hi in line 2. We see, then, in this brief extract how (1) the utterances are adjacent, (2) they are produced by different speakers, (3) they are ordered as a first part and a second part, and (4) they are typed. Now consider the following pair of utterances.

This sequence begins like the previous one, with a question. Now, according to the conditions set out above, a first pair part question should be followed by a second pair part answer and this should be adjacent. However, this is not what occurs. In this instance, Pam’s opening question in line 1 is not followed by the expected answer in line 2 but by a question how much does it cost? This so-called request for clarification is, clearly, directed back to Pam and it is appropriate that she should, therefore, speak next. This she does in line 3, providing the answer twenty pounds to the immediately prior question. Steve then takes up the next turn at talk in line 4 with I don’t think so. This final utterance is now interpretable as the second pair part answer to Pam’s original opening question do you want to become a member?

Conversational sequences such as these are quite common, e.g. where a question is not followed by an answer, or where a greeting is not followed by a greeting. We must, therefore, replace the condition of adjacency with what is known as conditional relevance. In other words, the management of conversation can occur over a number of turns at talk and relevance does not dissipate until a second pair part is given. In other words, once a first pair part is uttered it becomes conditionally relevant that the other participant should produce the relevant second pair part, or give an explanation as to why it has not been produced. Failure to produce the relevant second pair part is noticeable to the participants. In the example above, it was conditionally relevant that Steve provide a second pair part answer (answer A) to Pam’s original first pair part question (question A). This was, in fact, provided but it was produced after two intervening turns at talk. The sequence of talk in lines 2-3 served to gather certain information before Steve was able to respond to Pam’s original question. It is rather like an aside, in which the participants negotiate further before returning to the main theme. Such sequences are referred to as insertion sequences. A further example, incorporating a couple of insertion sequences, should make this clear.

1 Customer:   do you have a copy of Creating

In this extract, the customer speaks first in lines 1-2 by producing a first pair part utterance that is typed as a question, do you have a copy of Creating Affluence by Deepak Chopra? It is evident that the librarian has either not heard or not understood the customer, as she does not provide an expected second pair part answer to the question. Instead, she produces a request for clarification by who? in line 3. This question is the start of the first insertion sequence. This request for clarification is also a first pair part question and, as such, it requires a second pair part answer. The customer provides this answer in line 4 by repeating the name of the author Deepak Chopra. Subsequently, a second insertion sequence is commenced in line 5, with the librarian informing the customer I’ll have a look. This type of utterance acts as a sort of time out that puts the conversation on hold (Levinson, 1983, p. 304).

The implication here is that the librarian is going to check if the book is available. This first pair part utterance is then followed by the second pair part utterance thanks in line 6. This type of utterance is usually referred to as an accept, i.e. the customer has acknowledged and accepted the signal that the conversation is about to be put temporarily on hold. There is then a gap of 21 seconds (line 7) whilst the librarian checks the book’s availability. Eventually, in line 8, the librarian produces the utterance sorry, it’s out. This utterance can be seen to be the second pair part answer to the original first pair part question do you have a copy of Creating Affluence by Deepak Chopra? Again, therefore, we see how this original question set up a conditional relevancy that an answer should be provided. Once more, rather than the answer being provided in an adjacent utterance, insertion sequences intervened before the expected answer was given. It should be clear that if the librarian had failed to provide this second pair part answer then this would have been noticeable to the customer.

The final example in this section demonstrates how interlocutors notice the absence of a relevant second pair part and how explanations for their absence may be provided.