You are here: Home > Language > Mean Length of Utterance 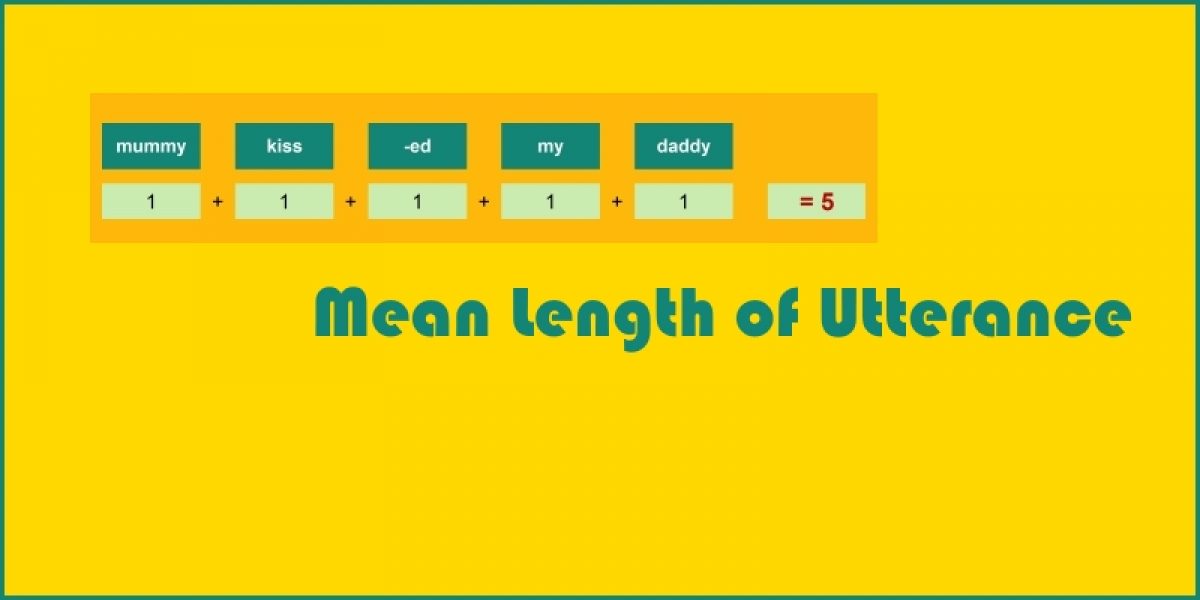 Children’s language development follows a sequential order. This is true of their developing expressive language skills and, as they mature, the length of their utterances increases (see also Lengthening Utterances with ‘And’). Consequently we are able to relate the length of an utterance to a child’s age. Thus, we can say that at 20-30 months of age utterances are typically two words long, at 28-42 months they are up to four words long, at 34-48 months they are up to six words long and from 48 months they are usually longer than six words. It should be possible, therefore, to measure the typical length of a child’s utterances and determine whether or not this is in keeping with what would be expected for their age.

The morpheme as the basis of measurement

Now, the basic element of language is the morpheme [i.e. the smallest element in a language capable of creating a difference in meaning, e.g. in the word dis-interest-ed, dis- is a prefix, -interest- is a root, and -ed is a suffix: these are all morphemes] and not the word. It is, therefore, more instructive to determine the length of a child’s utterances in relation to morphemes rather than words. This will take into account the child’s developing morphological skills as well as their syntactic skills. Clearly, it is not sufficient to examine just one utterance, as there is a great deal of variation in the length of utterances. If I ask you, ‘Where do you live?’ you could answer simply, ‘Hull’, or ‘In Hull’, or ‘I live in Hull’, and so on. It is necessary, therefore, to examine several utterances and then to calculate the average length of utterance based on a count of the number of individual morphemes in each utterance. We will now provide a limited example of how to calculate a Mean Length of Utterance (MLU).

Suppose we have heard a 48 month old child produce the following utterances.

I live in Billingham

What we need to do now is determine the age at which the majority of children would present with a mean length of utterance equivalent to the one our particular child has scored. This is known as the age equivalent. We do this by reading off the age equivalent in Table 1. From the table, we see that an MLU of 4.25 lies between 4.09 and 4.40. We can conclude, then, that an MLU of 4.25 would be expected in a child of between 45-48 months of age. As we know that our particular child is 48 months old, then it appears that the average length of the child’s utterances is age appropriate. This suggests, therefore, that this child’s expressive language skills are developing along typical lines.

A final note on calculating an MLU is worth making. Whilst an analysis of four utterances is better than analyzing just one (we would have an MLU of 3.00 if we had analysed only the child’s first utterance go home now), four utterances is still not enough to achieve anything like reasonable accuracy. Ideally one should analyze no fewer than 100 utterances. Clearly, the more utterances that can be analyzed then the more accurate will be the result (Miller and Chapman, 1981; Bishop and Adams, 1990). Now, whilst an MLU is helpful as an indicator of expressive language development it would not, and should not, be used as the only measure of expressive language ability. Garton and Pratt (1998) note that there is a positive correlation between an MLU and chronological age. However, they warn that the correlation is weak. At best, therefore, an MLU is a useful guide, being insufficiently robust for any sort of detailed diagnostic measure. For example, it is not always easy to decide what constitutes an utterance in a child’s speech. It can also be difficult to determine what counts as a morpheme. For example, should simple past tense forms of irregular verbs (e.g. sang, brought, went) be counted as one morpheme whilst those of regular verbs (e.g. talk-ed, play-ed, push-ed) are counted as two? There is no doubt that regular simple past tense forms are constituted from two morphemes and we know that a child’s ability to signal this past tense occurs early in their acquisition of morphemes (see Table 2).

If our focus is the child’s growing ability to signal meaning then irregular past tenses can be viewed as being on the same footing, i.e. they also signal a past tense meaning. The fact that irregular English past tenses are not structurally constituted from two readily identifiable elements is merely an artifact of the English language. However, it is arguable that the child understands irregular past tenses as single units. From this perspective, then, they would be viewed as being constructed from just the one morpheme – one meaning unit, one morpheme.

Difficulties such as those described above often mean that different analysts will calculate slightly different MLUs for the same utterances. For this reason, it is usual to declare the protocol that is to be followed when calculating an MLU. Others may legitimately argue about the decision-making process but a protocol does at least provide a principled basis by which MLUs can be calculated. Figure 1 sets out a fairly typical protocol.