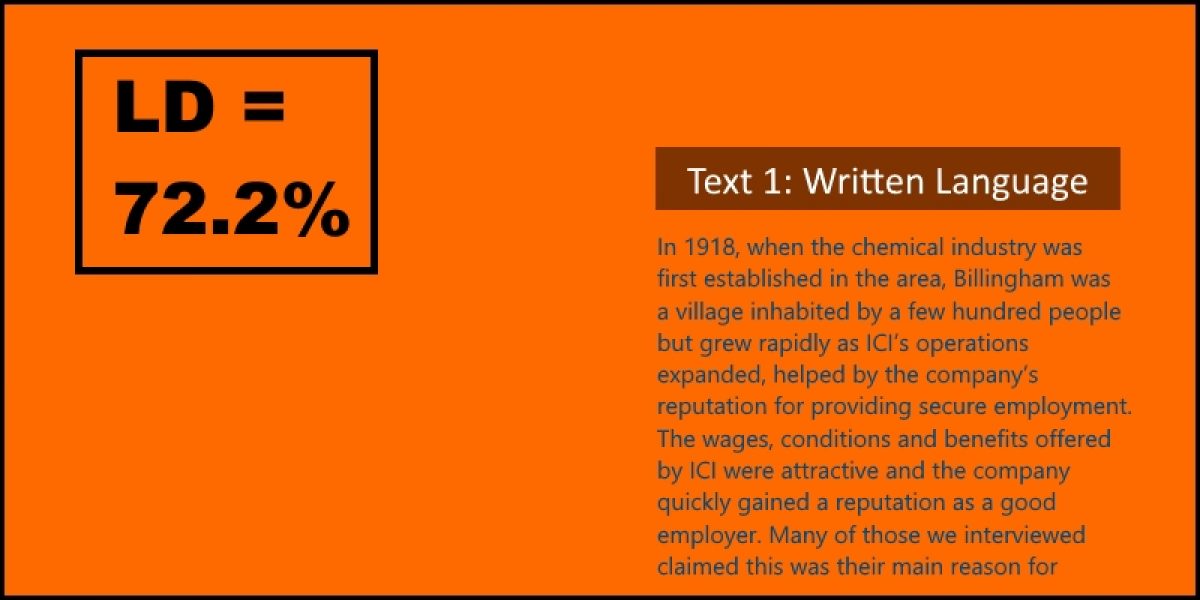 Consider Text 1 below, which is an example of Margaret Williamson’s written language extracted from her the book ‘Life at the ICI’ (2008).

Now, take a look at Text 2 which is an example of Margaret’s speech, i.e. spoken language. [Text 2 is actually a summary of all of her spoken utterances as they appear in lines 1-36 of the example broad transcription in the article on this website entitled Transcribing Conversation, where Margaret is denoted as ‘M’.]

There are some obvious differences between these texts. For example, the spoken language appears to have incomplete clauses (e.g. “On Sunday…you, you’re home all week…all…”). In fact, incomplete clauses such as these are a frequent feature of spoken language. The structure of the spoken clauses also appears to be simpler than those of the written text.

A useful measure of the difference between texts (for example, between a person’s written language, and a transcription of conversation) is lexical density. In order to calculate lexical density we need to make a distinction between different types of words: (1) lexical words (the so-called content or information-carrying words) and, (2) function words (those words which bind together a text) within the word classes of English.

Function words, therefore include the remaining:

A third type of word grouping is also typically recognized: inserts. These are words which are used to gain attention, express emotion, protest, and so on (e.g. okay, right, oh). These are not considered to be lexical words.

Text 1 is reproduced below but this time the lexical words are underlined (you may not necessarily agree with the way I’ve classified the words, there are typically instances of ambiguity when analyzing texts).

In 1918, when the chemical  industry was first established in the area, Billingham was a village inhabited by a few hundred people but grew rapidly as ICI’s operations expanded, helped by the company’s reputation for providing secure employment. The wages, conditions and benefits offered by ICI were attractive and the company quickly gained a reputation as a good employer. Many of those we interviewed claimed this was their main reason for applying for a job. Our interviews also highlight the influence of family when making decisions about employment and ICI was certainly happy to recruit the sons and daughters of existing workers.

There are, therefore, 60 lexical words and 42 function words out of a total of 102. Lexical density is calculated as follows:

Text 2 is reproduced below but this time the lexical words are underlined.

There are, therefore, 48 lexical words and 56 function words out of a total of 104. The lexical density is, therefore:

The finding that the lexical density of speech (in this case, 46.2%) is less than that of written language (in this case, 58.8%) is typical. We have already noted that speech is typified by incomplete clauses. Incomplete clauses are a product of the speaker having to construct his or her utterances in real time. There is limited time to think about, and plan, what one wishes to say and speakers often commence along one trajectory only to pause and move on in another direction. Incomplete clauses are, however, not a common feature of written texts, where the author has a much longer time to plan and shape the units of meaning that he or she wishes to use. There is sufficient time to select the most appropriate lexical word, review the text and replace words before one makes the text available. The time pressures of speaking typically lead to a lexically simpler text. Lexical density, then, can serve as a useful measure of how much information there is in a particular text.

It can also be used to monitor improvements in the use of lexical items (information carrying-words) in children with under-developed vocabulary and/or word finding difficulties.

However, the book that I often refer to for definitions is:

There is also some information about lexical density to be found in: