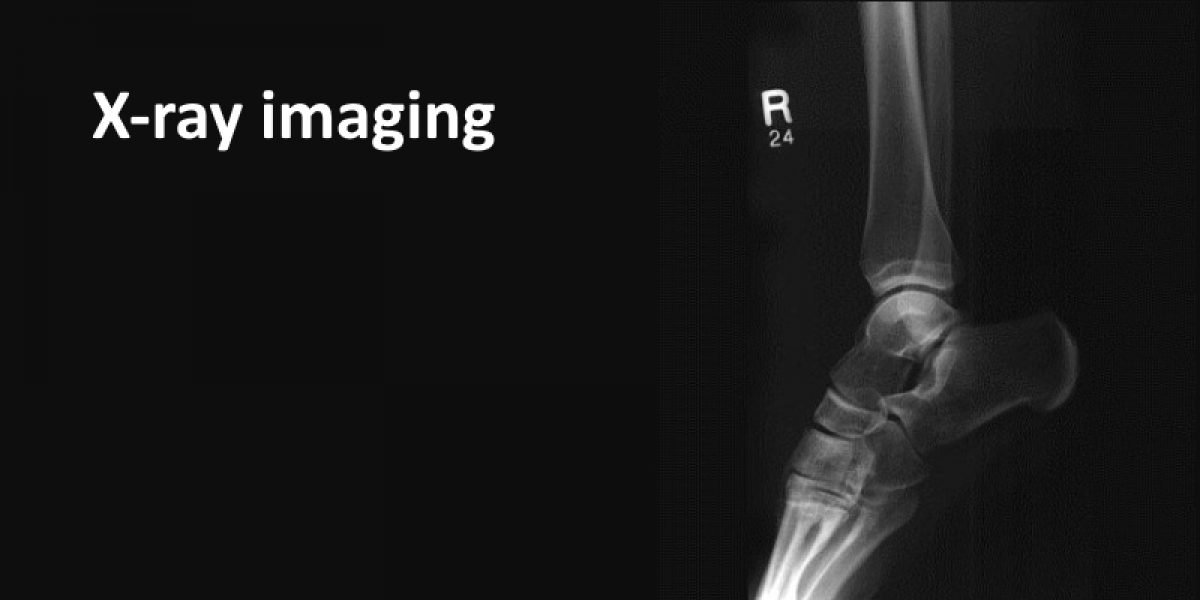 X-ray imaging is probably the best known and most widely used of medical imaging techniques. Not only are X-rays the longest established means of producing images of the internal structure of the body, but X-ray imaging is also the workhorse technique for all radiology departments.

X-rays are high-energy electromagnetic radiation; those used for diagnostic imaging typically have photon energies between 20 and 120 keV.

In X-ray imaging, a beam of X-rays is passed through the patient and detected on the opposite side. As the X-rays pass through the body some are either absorbed or scattered. This attenuation (i.e. weakening in intensity) depends on the thickness of the material and on its so-called attenuation coefficient.

Bone has a much higher attenuation coefficient than soft tissue, which in turn has a higher coefficient than air. This means that, if a patient is placed in a uniform beam of X-rays, radiation that has passed through soft tissue will have a higher intensity at the detector than radiation that has passed through bone. Hence the image will show good contrast between bone and soft tissue and, similarly, between soft tissue and lungs. X-ray images usually show the high attenuation material (e.g. bone) as white and the low attenuation material as black (see Figure 1). 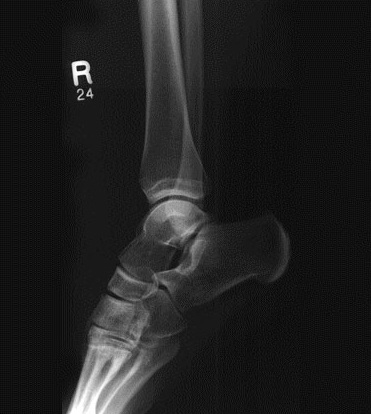 Figure 2 shows an X-ray unit being used to image a person’s skull. Its main components – the x-ray source, collimator, patient couch, and film and cassette holder – are labelled. 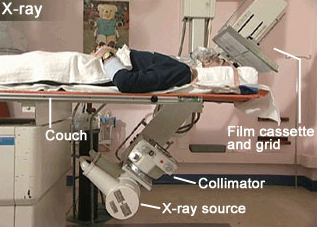 Components of an X-ray unit

X-rays are produced when energetic electrons strike a metal target. The X-ray source consists of an evacuated tube containing a cathode, from which the electrons are emitted, and an anode, which supports the target material where the X-rays are produced. Only about 1 per cent of the energy used is emitted as X-rays – the remainder is dissipated as heat in the anode. In most systems the anode is rotated so that the electrons strike only a small portion at any one time and the rest of the anode can cool. The X-rays are emitted from the tube via a radio-translucent exit window. 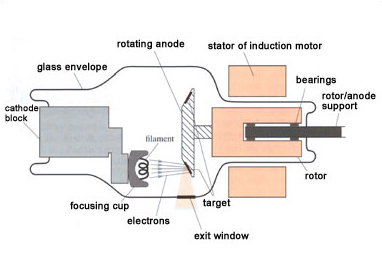 Some of the X-rays are given off at an energy that depends on the nature of the target material. These are known as characteristic radiation. There is also a broad spectrum of radiation known as bremsstrahlung (braking radiation); it is this radiation that is used in most diagnostic procedures. However, both types contribute to the radiation dose given to the patient.

The dimensions of the emerging X-ray beam can be altered by the collimator. This helps to ensure that only the region of interest is exposed to the X-rays.

The couch or patient trolley must be radio-translucent (i.e. it allows through most of the X-rays). Nonetheless there is some interaction between the couch and the X-rays and this can be a cause of scattered radiation.

Analogue imaging systems use either film alone (rarely) or a combination of a film and fluorescent material (phosphor). The phosphor fluoresces and produces visible light which is recorded by the film. The film is then developed.

Digital imaging systems use a variety of methods to record the intensity for each pixel in the image. This can then be displayed on a computer screen or printed out on film.

Together with videofluoroscopy and Magnetic Resonance Imaging (MRI), X-rays is a popular technique for making images of the vocal tract. It is a useful tool for the instrumental measurement of voice.

This article, including the header image, is adapted from ‘Imaging in medicine’. An OpenLearn (http://www.open.edu/openlearn/) chunk reworked by permission of The Open University copyright © 2016 – made available under the terms of the Creative Commons Licence v4.0 http://creativecommons.org/licenses/by-nc-sa/4.0/deed.en_GB. As such, it is also made available under the same licence agreement.