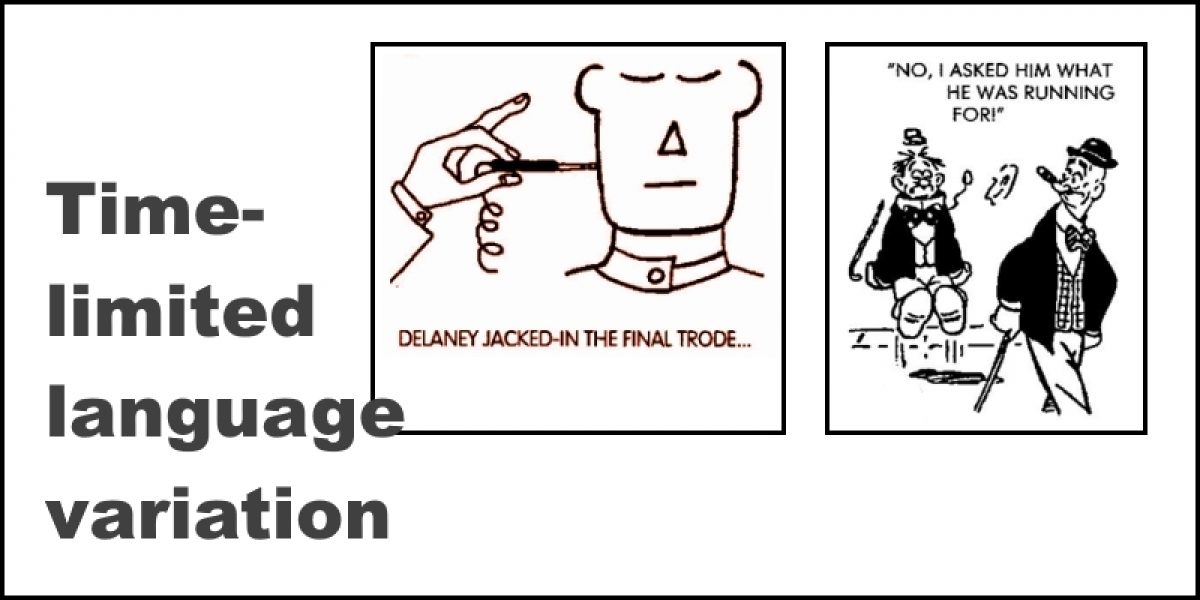 Variations in syntax, morphology, vocabulary and phonology (see Pragmatics) are typically time-limited, i.e. certain words, phrases, clause constructions and pronunciations are only popular for a particular period of time.

For example, bus is now commonly taught as a vocabulary item to non-native speakers learning a Standard English grammar. However, it is derived from the, now archaic, word omnibus (“a large public vehicle carrying passengers by road, running on a fixed route and typically requiring the payment of a fare” (Oxford English Dictionary)). Similarly, pram is now used for the archaic term perambulator (“a carriage for a baby or young child, which may be pushed along by a person on foot” (Oxford English Dictionary)). It is these sorts of variations that allow us to judge a spoken utterance, or written sentence, as being either contemporary or dated. Take a look at the humorous cartoons ‘CyberPunk’ and ‘Miffy’. 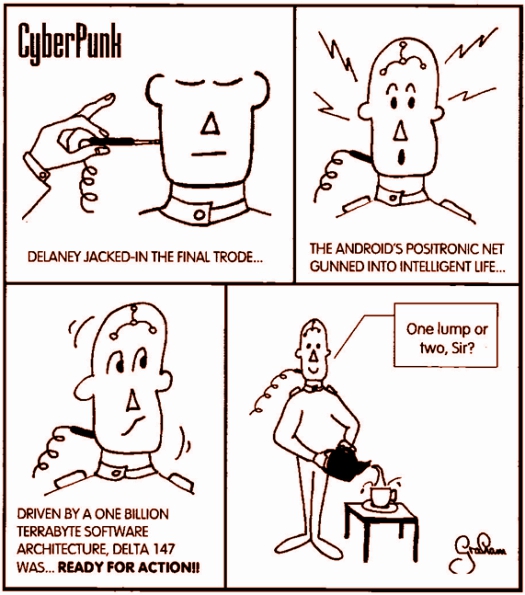 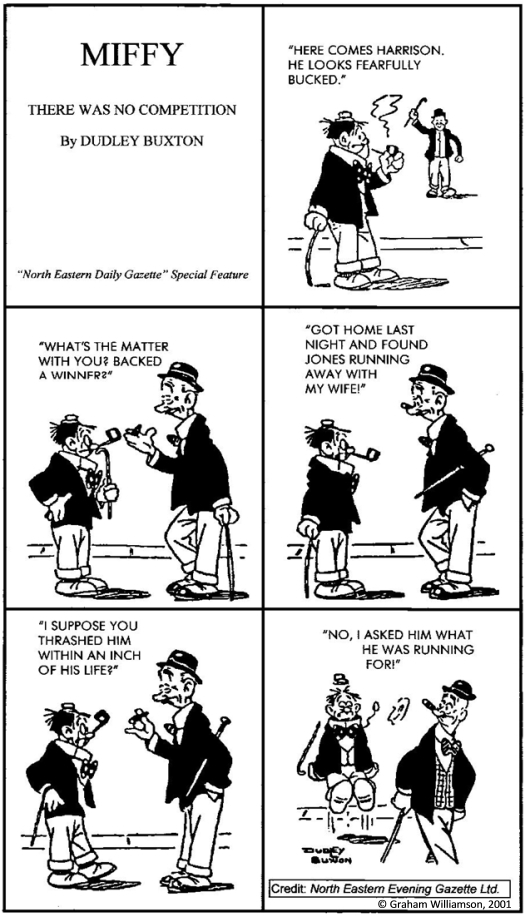 If you are able to ignore the stylised drawing of each cartoon and focus just on the language it should be obvious that ‘Miffy’, with phrases such as fearfully bucked and thrashed him within an inch of his life, is somewhat older than the more contemporary ‘CyberPunk’. Such phrases do not generally appear within the current common vernacular. In fact, ‘Miffy’ was first published in 1923. In contrast, ‘CyberPunk’ incorporates a different set of vocabulary items and phrases. For example, the noun android, the composite noun terrabyte and the phrase software architecture set it apart from the time period of ‘Miffy’ and squarely within the popular culture of the present or even future time. In addition, ‘CyberPunk’ includes a number of neologisms, i.e. invented words or phrases with newly coined meanings, such as the verbs gunned and jacked-in. These items contribute to the contemporary, or futuristic, milieu.

A final point relating to the ‘Miffy’ cartoon is that the subject matter is of a man telling a joke about his wife. Such a theme is now likely to be considered by many to be politically incorrect. That is to say, wives, mothers-in-law, people with disabilities, members of ethnic minority groups, and so on, are no longer considered appropriate targets for certain types of joke. Such attacks flout liberal convention and are considered to be discriminatory. The point to be made here is that we will also make judgements about the historical placement of a spoken or written text based on its thematic content. However, whereas morphology, syntax, vocabulary and phonology are linguistic in nature, content is not. In other words, we can make linguistic choices about how to vary morphology, syntax, vocabulary and phonology but we cannot make a specifically linguistic choice over the selection of content: we apply whatever linguistic features we choose to any selected content.

Aphasia
Linguistic Performance and Linguistic Competence
The Function of Morphemes