You are here: Home > Psychology > Theory of Mind 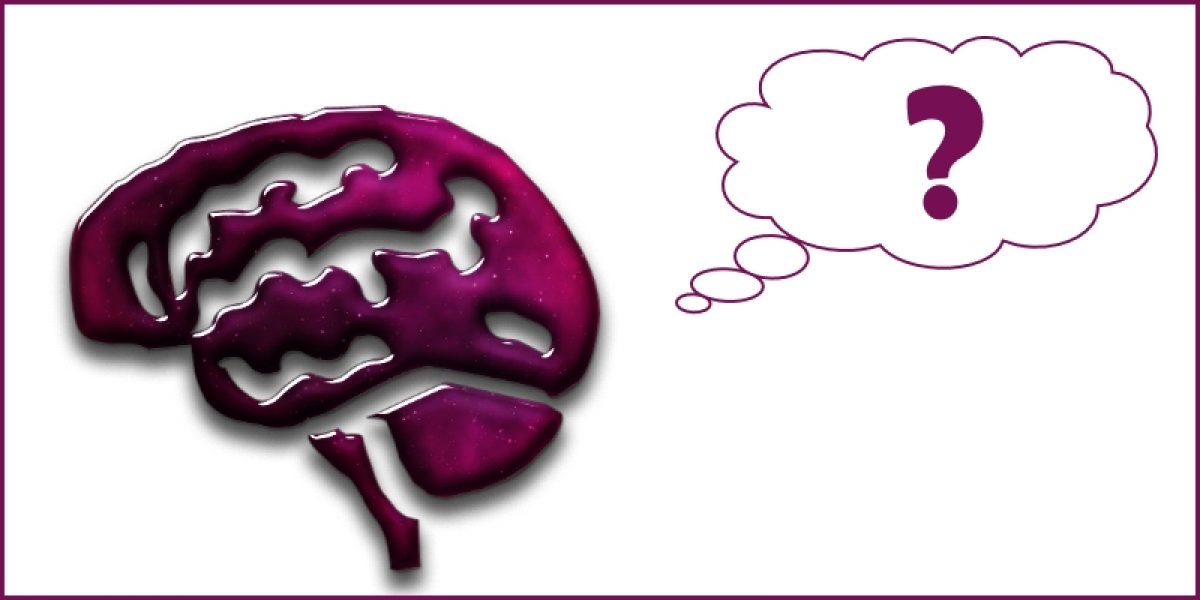 What is ‘Theory of Mind’?

One of the startling consequences of the ability of the human mind to reflect on itself – to think about my thinking – is that I realize other people have minds as well. I can assume that if I am a conscious being capable of acting with intent, then other humans are similarly capable of intentional actions. I can appreciate the intelligence of others. In this way, I am no longer limited to purely observing another human’s behavior as being mere physical movement but I can infer their intentions and even their beliefs. I possess, therefore, what is known as a theory of mind (ToM), i.e. I hold the premise that other humans have minds in the same way that I do. Through a sophisticated process of inference, I am able to represent in my own mind the mental representations of other people – so-called metarepresentations. I can infer their beliefs, thoughts, desires, intentions, and so on, and use this information to interpret their behaviors – even predict what they may do next. There is evidence to suggest that even young infants possess a limited theory of mind and that the ability to understand the minds of others develops rapidly up to the age of 5;00 years and then beyond.

Developmental origins of theory of mind

The critical skills for engagement in the social world, which Baron-Cohen (1995) calls mind-reading, appear to be both complex and subtle. Certain early infant behaviors are thought to provide the basic ‘building blocks’ for this mind-reading.

Consider how behavior might provide one person with cues to what another person is thinking. For instance, how do you know that someone you are talking to is interested in what you are saying? They may open their eyes wide, sit up straight or make noises like ‘hmmm’. Such gestures and expressions are cues to thoughts, which we monitor all the time without being aware of it. Baron-Cohen (1995) provides evidence that the ability to use subtle behaviors, such as identifying where someone is looking and looking there too (gaze following) typically develops early, around 8 months. Similarly the capacity to look at something to which another person is pointing, or to point in order to indicate an object of interest (proto-declarative pointing), develops at around 12 months. Both types of behavior enable a child to co-ordinate their own mental state (attention) with another person’s.

Consider the car parking example in the box above. Your judgment that your friend will go back to the original car parking place in Mount Street is actually a well-informed ‘guess’ based on evidence from your friend’s behavior. For instance your friend saw you parking the car and walked off without seeing you moving the car. We don’t consciously run through such information before calculating other peoples’ states of mind. However, we are capable of making rapid, direct and non-conscious judgments of what other people are likely to know or believe, in part at least, from what perceptual information they have had access to. Baron-Cohen (1995) suggests that this seeing leads to knowing principle is grasped by typically developing children between 36 and 48 months of age.

Alan Leslie (1991) has suggested that understanding mental states such as false belief requires the sophisticated skill of de-coupling or disengaging (mentally speaking) from the truth of a situation (e.g. ‘The car is in Park Street’), in order to hold in mind an idea that differs from this reality (‘Jane thinks the car is in Mount Street’). This capacity is known as metarepresentation and is seen as a crucial element of understanding language.

Leslie argues that typically developing children display simple de-coupling at around eighteen months, when they start enacting pretend play. In his words, when a child puts a banana to his/her ear, pretending that it is a telephone, s/he is temporarily disengaging from the reality (‘This object in my hand is a banana’) in order to indulge in the pretence (I’ll pretend that ‘this object is a telephone’). The principle that a person’s belief/knowledge about a situation depends partly on what perceptual information has been available to them. Children typically grasp this between 36 and 48 months. This ‘simpler’ metarepresentational skill may act as a developmental precursor for understanding that one’s own or other people’s thoughts can be hypothetical or different from reality. Figure 1 illustrates how acts of both pretending and false belief about a situation can be seen as metarepresentations. 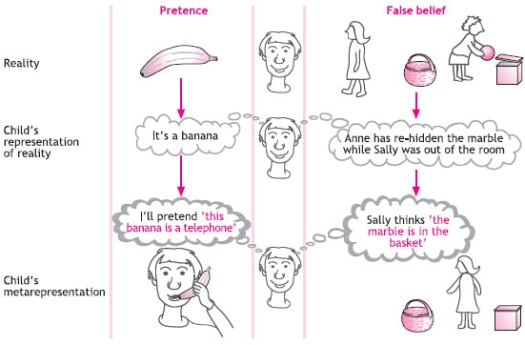 There is a similar idea of metacommunication, which refers to how children communicate their disengagement from reality in social pretend play. Leslie’s primary emphasis is on characterizing what thought processes are necessary for pretence – whether solitary or social.

Gaze following/gaze monitoring: The skill of following where someone is looking and looking there too in order to share attention. Infants typically develop this behavior at around eight months.

Metarepresentation: Process of disengaging from reality in order to think about one’s own or another person’s thoughts. Considered necessary for false belief, pretence, etc.

Proto-declarative pointing: The skill of pointing to indicate an object of interest, as opposed to pointing in order to ask for an object to be fetched. Infants typically develop this behavior at around twelve months.

Seeing leads to knowing: The principle that a person’s belief/knowledge about a situation depends partly on what perceptual information has been available to them. Children typically grasp this between 36 and 48 months.

Theory of mind/mind reading: A person’s capacity to understand the thoughts, intentions, beliefs and feelings of others (and themselves), sometimes known as ‘mind reading’.

Leslie, A. (1991) ‘The theory of mind impairments in autism : evidence for a modular mechanism of development?’ in Whiten, A. (ed) The Emergence of Mindreading Oxford: Blackwells.

The material presented in the Section entitled Developmental Origins of Theory of Mind is adapted from ‘The autistic spectrum: From theory to practice’. An OpenLearn (http://www.open.edu/openlearn/) chunk reworked by permission of The Open University copyright © 2016 – made available under the terms of the Creative Commons Licence v4.0 http://creativecommons.org/licenses/by-nc-sa/4.0/deed.en_GB. As such, it is also made available under the same licence agreement.

Thought and Language
Thinking about Disability
The Modular Mind