You are here: Home > Language > The Syntactic Problem 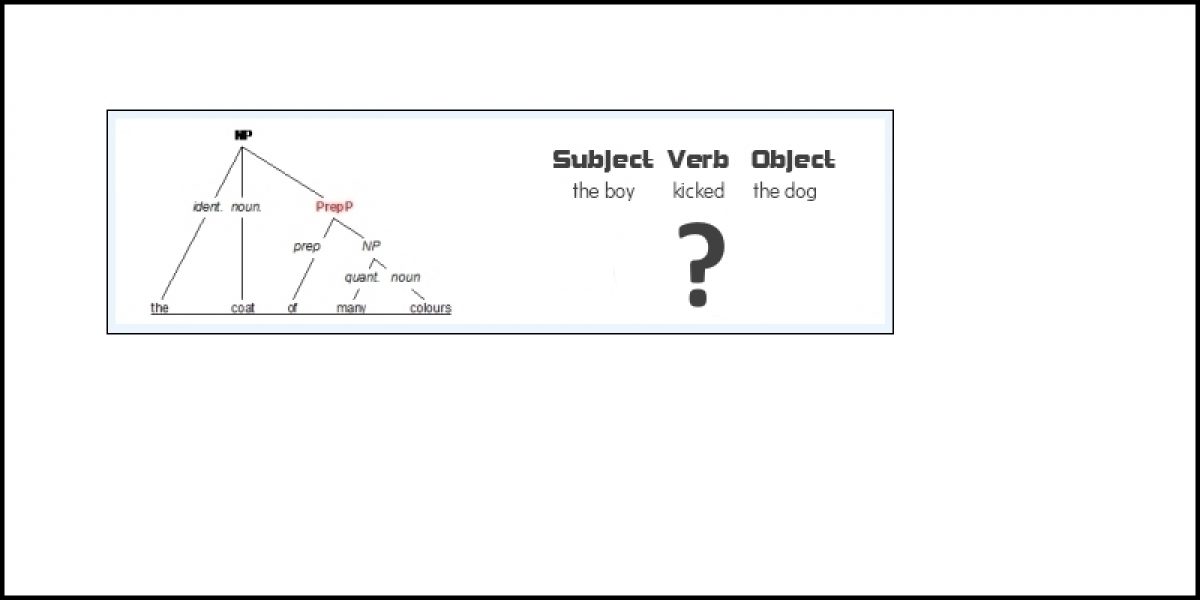 What is the syntactic problem?

The syntactic problem is a problem of linguistic processing. It concerns the problem of how roles such as subject and object are allocated in sentences and how different meanings are bound together. In sum, it is concerned with how we go from phonemes to sentence structure in order to understand spoken utterances.

Vervet monkeys have a system of calls that alerts other vervets that a predator is nearby. There are distinct calls for snake, leopard and eagle. For example, a loud triple barking sound is the call that alerts other monkeys that a snake is nearby. In the vervet monkey system, calls stand by themselves. Thus there is no syntax.

Syntax can be thought of as working like road traffic rules do. It does not much matter which side of the road you drive on, as long as there is some clear convention. Similarly in (1), it is necessary to understand the difference between (1a) and (1b) without ambiguity, by having some rule or other about which noun phrase comes first. England may differ from most of the rest of the world in terms of the side of the road that it drives on, but English agrees with 99 per cent of all languages in the syntactic convention that the first noun phrase encountered is generally taken to be the subject.

Syntax is concerned with such problems as the assignment of roles (subject, object, etc.) to the different participants in a sentence, and the binding together of different meanings. The syntactic task involved in even a straightforward sentence is of fearsome complexity. Consider for example (2).

In all these sentences, there are at least three important word meanings activated – dog, cat and green. We can assume that these meanings are different bundles of sensory features in long-term memory somewhere, which get activated by the recognition of their respective word forms. The question is how green gets hooked to the correct one of the other two traces, dog and cat. This is known as the binding problem. How the brain solves the binding problem is an active area of research.

You might assume from (2a) that knowing which bindings to make in language was quite straightforward. The brain, encountering an adjective, just has to look for the nearest noun phrase and bind the meanings together. Thus in (2a), green must be the cat not the dog because green is next to cat. However, in (2b), green is closest to cat in the sentence, but its meaning applies to the dog. In (2c), green is seventeen words away from dog. After dog come several other things which could be green: the cat, you and uncle Marvin. However, the only possible sense of this sentence for any native speaker of English is that the dog is green.

This tells us some very significant things about syntactic processing. The first is that the binding of different words together depends not upon their linear position in the sentence, but on their underlying syntactic relationships. The processing of syntactic relations cannot be completed until the whole sentence is finished.

The brain’s analysis of sentences depends upon identifying key words, which then offer ‘slots’ into which to bind the meanings of other elements. Thus in (2a), the verb bit offers two slots for noun phrases to bind to, one for the subject and one for the object. Any noun phrase which precedes the verb binds into the subject position. The first noun in a noun phrase is the head noun; the head noun offers slots to which other words like adjectives and articles (green and the) can bind. A whole clause can bind onto a head noun – this is what happens in (2c), where the clause which bit the cat … birthday binds to the dog. The whole thing then becomes a super-noun phrase which binds as a whole into the subject position of bit – that is, the subject of bit is not strictly the dog but the dog which bit the cat … birthday. Another way of looking at the non-binding of green to the cat is to say that the cat is already bound (into a noun phrase) and so is not free to go hooking up with verbs that might be floating around.
There are many other subtle syntactic processes, most of which we cannot consider here. Consider (3) below.

The brain has to assign a value to the he. It could be my dad that told me, or it could be my dad’s tutor. The phrase with a bang could modify the way the exam is going to hit home, or it could modify the way I was told about it. The former interpretation is preferred, but if you changed it to with a smile, then your interpretation flips to the latter. This is a case where the semantics of a word informs the syntactic analysis of the sentence.

Overall, then, the brain attempts to bind the words that the phonology has identified into a syntactic package that is well-formed, and liaises with the semantics to see if a sensible meaning is thereby produced. This is a dynamic process with interaction in real-time between the different components, which finally crystallizes on a unique meaning for at least most sentences. It is many orders of magnitude more complex than the vervet system, or indeed any other cognitive system that has yet been described.