You are here: Home > Language > The Semantic Problem

What is the semantic problem?

The semantic problem is a problem of linguistic processing. It relates to the issue of how spoken utterances are understood and, in particular, how we derive meaning from combinations of speech sounds (words). In sum, how do we go from phoneme to meaning? 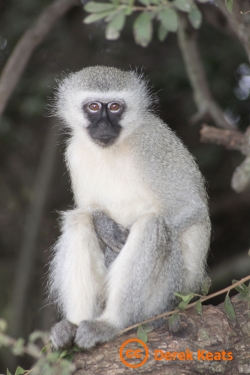 Vervet monkeys have a number of discrete alarm calls, e.g. eagle, leopard and snake. Each call has an unambiguous meaning. We know this because if an audio-recorded eagle call is played back to the monkeys, they scan the sky. Similarly, if a leopard call is played they climb trees. So, different, unvarying associations are induced in the vervet brain. Therefore, for a vervet monkey, once an alarm call has been assigned to the correct phonological class (eagle, leopard or snake) then the task of understanding is straightforward. Each of the sound patterns is connected in long-term memory to some ‘prototype’ of the predator in question, including what it looks like, what it does, and so on. The eagle call always means eagle, whatever the context. The activation of the brain trace for the eagle call invariably activates the brain trace for the eagle meaning. That is how the monkeys know to look up after an eagle call and down after a snake call.

The classic way of describing language processing in psychology textbooks makes it seem that human language is not much different. Each word, these textbooks say, is linked to a non-linguistic ‘prototype’ of what it means. For eagle, this would be pretty similar to the vervet’s representation of the eagle call’s meaning. The trouble with this account is that much of the meaning in human language is not really like that.

Not every word has a meaning

Many words in everyday language do not carry any meaning, at least not in anything like the eagle sense. Consider sentence (1).

There is only one element in (1) with any independent meaning. The it certainly does not refer to anything. (You can’t seek clarification of (1) by asking What is raining?) The is has no meaning. Indeed, the verb to be in general is completely devoid of intrinsic meaning. So why are there three words in this sentence, which really consists of a single meaningful element – raining?

Many words in language are there only because the syntax of a language demands that sentences conform to certain templates; in English, for example, that they have both a verb and a subject. The subject is usually the doer in a sentence. But there is no real subject in the fact that it is raining today – it is just a state of affairs. Thus English syntax demands we fill in the sentence with what is largely meaningless material – it – to make the sentence well-formed. Italian, which is more relaxed about the overt expression of a subject, allows example (1) to be captured with a single word (2), which is also a well-formed sentence.

Other languages, like Hebrew and Arabic, relax the requirement for every sentence to have a verb, allowing sentences like (3).

However they differ, languages all require a wealth of material whose meaning is either nearly zero, or is filled in entirely from context. Thus for some words, what you look up in long-term memory is not a prototype of the thing to which the word refers, but a further instruction to look for something else in the sentence. Inferring which function a word is carrying in a sentence is subtle. Consider (4).

These sentence pairs differ only by a single word. In (4a), it is generally taken to mean the dog. In (4b), the it cannot be read as identifying the dog; it must mean the field. In (4c), the it stands for neither dog nor field, but is a purely syntactic it filled in by the need for the verb to have a subject. Thus, having identified it as the word spoken in this position in the sentence, the brain has to try out several possibilities for its meaning in the context, until it comes up with one that makes some kind of sense. Note that you cannot begin to work out what the it means in (4) until you have had the key word running, ploughed or raining. This is a very important point. In processing language in general, you cannot process the meaning of all the elements in the order in which they come. Consider (5).

The meaning of bank could be to do with money or to do with rivers. This cannot be resolved until later information arrives. Bank must thus be kept in a pending tray somewhere until more data are available. Linguists thus believe the brain must have a storage pad in which sentences are assembled and disassembled, with the words represented in a way which is still neutral as to which meaning is the right one.

We see from the above that identifying the meaning of a word depends not just on its phonological form (see The Phonological Problem), but on two other things. These are:

This latter is important, since your reading of (5b) would be quite different in a story about three guys who decide to rob Barclays disguised as the British kayaking team on a promotional tour.

The resolution of meaning depends on a dynamic interplay of these three elements. Often the meaning of a set of words departs almost entirely from the meaning you would expect from them individually. Just consider example (6).

It has nothing to do with hitting, nothing to do with homes, and only a metaphorical bang. Sentences at least as complex as this are everyday occurrences, yet you decode their meanings in a completely automatic way without even being aware of the work your brain has to do.