You are here: Home > Grammar > The Function of Phrases within Clauses

The Function of Phrases within Clauses 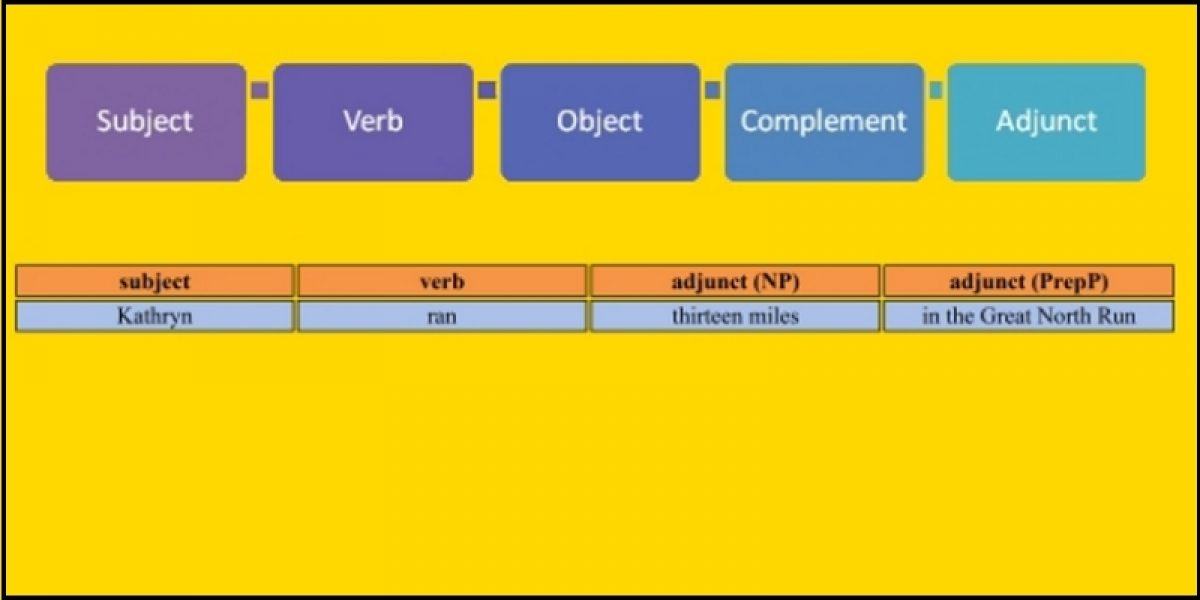 Phrases can combine, according to grammatical rules, into larger units known as clauses, e.g.

Phrases assume different functions depending on the clause structure. There are five functions:

The verb (V) describes actions that are instigated by someone or some animate being, events that happen, or the state people or things are in (see What Do We Talk About?). So, in the small child had cuddled the little frightened kitten the verb is represented by the verb phrase had cuddled. This consists of the auxiliary verb had and the past tense of the lexical verb cuddle (i.e. cuddled). This, therefore, describes the action performed by the child. In fact, the verb function is always realized by a verb phrase.

According to some descriptive systems, a clause must consist minimally of a verb. However, we frequently find clauses that do not appear to contain a verb, e.g.

she met him when a student in the seventies

So, in cases such as this, the subject is ‘who’ or ‘what’ acts out the verb. Consider another example, that incorporates the action verb sing:

my teenage daughter sings in the choir

In statement clauses such as this, the subject typically precedes the verb. However, this is not always the case. Consider the following:

along the A689 resides the attractive village of Powburn

In addition, some verbs serve only to link the subject of the verb to supplementary information within a clause. Linking verbs such as is, be and seem are known as copulas: they join, or couple, the subject to additional information, e.g.

In the majority of cases, the subject function within clauses is realized by a noun phrase (e.g. from the above examples: the small child; my teenage daughter; the attractive village of Powburn; the book; Graham; Rooney).

Finally, we began this subsection by pointing out that some descriptive systems assert that every verb in a clause must have a subject. There are at least two exceptions to this rule: (1) imperative clauses, and (2) nonfinite clauses.

The imperative is a clause structure used to issue commands or requests. The base form of the verb is used but there is no stated subject, e.g.

However, the subject is effectively taken to be ‘you’, i.e.

please be careful you

These clauses similarly have no stated subject. They typically commence with a nonfinite verb form, i.e. one that is not marked for person, number, or tense, e.g.

to reach the destination

However, the subject is usually recoverable from the clause to which it relates, e.g.

having slept in, he missed his exam

to reach the destination they had to walk a long way

written twenty years ago, this law is outdated

The object answers the question what? For example, ‘What had the small child cuddled?’ Answer: the little frightened kitten.

In this example, we see that the subject acts directly on the object. Sometimes, therefore, an object functioning in this way is referred to as a direct object. Now, whilst a direct object can be viewed as the thing acted upon, an indirect object refers to the somebody or something that is a recipient or that benefits from the verb’s action. An example should make this clear:

In the examples above, the object function has been filled by a noun phrase. This is the most common type but there are instances where, arguably, a prepositional phrase may function as an object. For example, in the clause he talked about the car, the object that receives the action of the subject’s verb is the car. As this object occurs after a preposition, it is sometimes known as an object of preposition. One way of analyzing this, therefore, is to treat the preposition as belonging to the object, i.e. subject he (NP), verb talked (VP), object about the car (PrepP). An alternative approach is to view the preposition as belonging to the verb, i.e. the verb to talk about. This would, therefore, be an example of a prepositional verb. The analysis would now be: subject he (NP), verb talked about (VP), object the car (NP). Using this approach, the object function is, once again, filled by a noun phrase (the car).

In this instance, therefore, the adjunct function is filled by an adverb phrase. However, this function can also be filled by noun phrases and/or prepositional phrases, e.g.

We see in this example that there are two adjuncts. The first (three miles) is a noun phrase and the second (in the Great North Run) is a prepositional phrase. This also demonstrates that clauses may consist of more than one adjunct. As we have indicated, adjuncts are largely optional elements, as their non-inclusion does not typically make a clause ungrammatical. For example, Kathryn ran in the Great North Run (1st adjunct omitted), Kathryn ran thirteen miles (2nd adjunct omitted) and Kathryn ran (both adjuncts omitted) are all grammatical.

A complement (C) fills the same position as an object in a clause and refers to the same thing as the subject. To understand this, consider the following utterance:

Now, the complement (tired) makes reference to the same thing as the subject (Nihal), i.e. it is Nihal who seems to be tired. Further examples include:

It is apparent in these examples that the complement refers to the same thing as the subject, i.e. Angela is upset, the coat is worn, Li Wei’s mother is sullen. The complement function is typically filled by either an adjective phrase, as in each of the immediately above examples, or by a noun phrase, as in Graeme became a teacher, where a teacher is the noun phrase complement.