You are here: Home > Speech > Syllables and Clusters 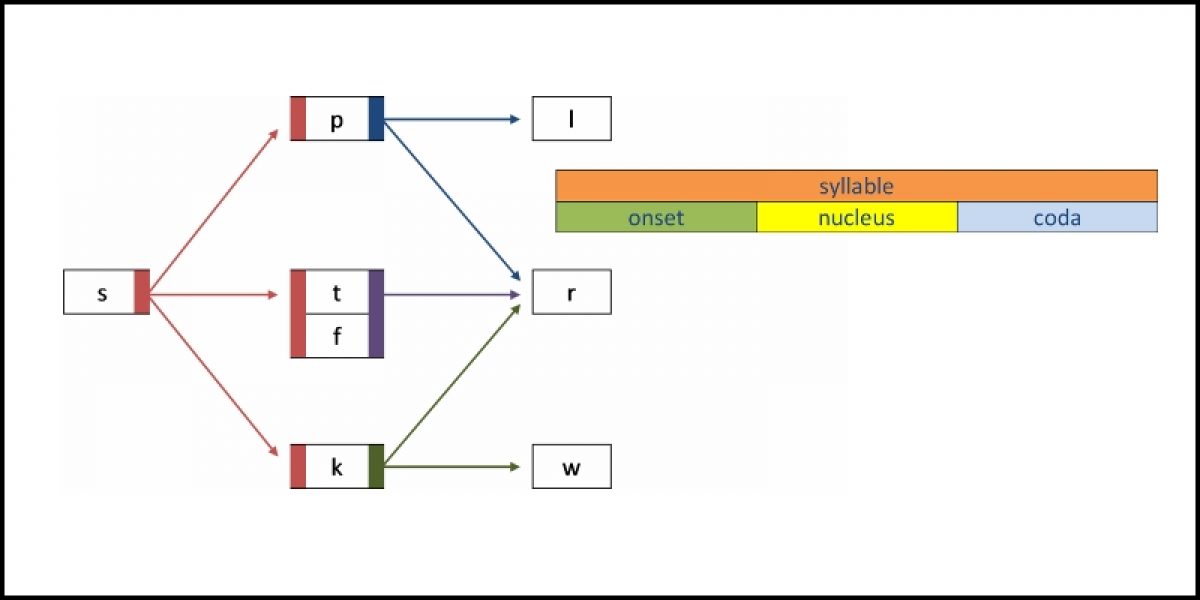 We have seen elsewhere (Phonological Organization) that phonemes may be combined to form words and that there is an intermediate level of phonological organization between the phoneme and the word known as the syllable. This article examines the organization of syllables in greater depth.

Syllables have a fundamental three-part structure as follows (Harley, 2006).

The initial element is the onset. Only consonants can fill the onset slot. Similarly, the final element – the coda – can only be filled by consonants. The central element is the nucleus (sometimes known as the peak) and all syllables must minimally consist of a nucleus. For the majority of English syllables the nucleus is typically a vowel sound. However, for a relatively small number of syllables a so-called syllabic consonant may optionally fill the slot. In this article we will focus only on syllables in which a vowel acts as the nucleus. In English, the nucleus only contains one vowel, either a monophthong or a diphthong, known as the nuclear vowel. Examples of syllables consisting only of a nuclear vowel include the following.

Of the 20 or so vowels in English, only a handful appears to construct meaningful words when spoken in isolation. It is, therefore, much more likely that consonants will accompany a nuclear vowel: appearing in the peripheral positions, either in the initial position before the central nuclear vowel or in the final position after the nuclear vowel. Syllables may be constructed with consonants only in the initial position, only in the final position, or in both positions at the same time. Whereas only one vowel is permitted within any syllable, up to three consonants can be placed before the nucleus. This is in the so-called prevocalic position and, as we have seen, it is referred to as the onset of the syllable:

In CCV syllables there is a sequence of two consonants without an intervening vowel. Sequences such as this are called clusters (sometimes known as blends). As you might expect, there are restrictions on which consonants can combine to create these two-consonant clusters. The allowable combinations are summarized diagrammatically in Figure 1 (adapted from Jackson 1980, p. 43) [1]. 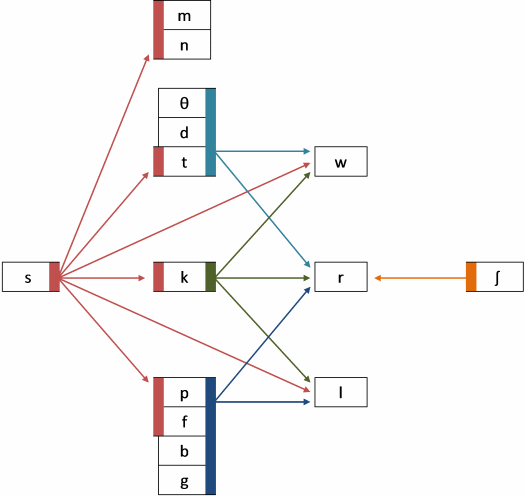 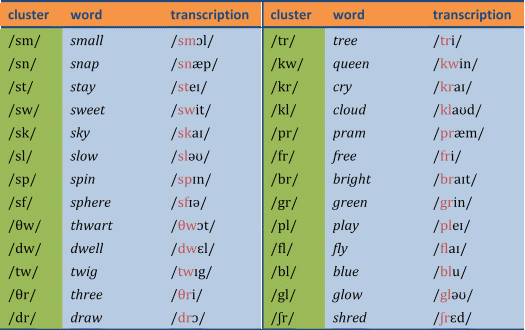 In CCCV syllables the restrictions are even greater (Figure 2; adapted from Jackson 1980, p. 44). 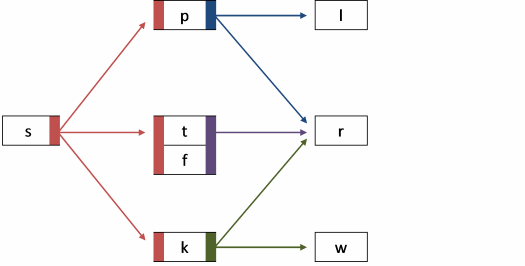 We see from Figure 2 that all allowable three-consonant clusters are s-clusters, i.e. the initial consonant is /s/. Further, there are only six three-consonant clusters: /spl/, /spr/, /str/, /sfr/, /skr/ and /skw/. The combination /sfr/ is extremely restricted in English. Examples include sphragide /sfreɪdʒaɪd/ (a pellet of clay from the Greek island Lemnos), sphragistics /sfrəʤɪstɪks/ (the study of seals and signet rings) and sphrigosis /sfrɪʤəʊsɪs/ (over abundant growth in plants). These words all have a Greek origin and have been adopted into the language. As such, it is arguable that the combination /sfr/ in syllable-initial position is not strictly allowable under the rules of English phonology. Table 2 provides some examples of three-consonant syllable-initial clusters in words.

Table 2. Examples of the six syllable-initial three-consonant clusters in words.

In addition to three possible consonants in syllable-initial position, up to four consonants may be arranged after the vowel. This is in the so-called postvocalic position and, as we know, is referred to as the coda. Together the nucleus and the coda construct what is known as the syllable rime [2]:

As stated earlier, and demonstrated by the last example of texts above, consonants may occur in both prevocalic and postvocalic positions within the same syllable. Further examples include:

The above discussion demonstrates the basic syllable structure as consisting of an onset, a nucleus and a coda – with up to three consonants in the onset position, a vowel (or in some circumstances a syllabic consonant) as the nucleus, and up to four consonants acting as the coda (Figure 3).

(1) Figures 1 and 2 ignore the semi-vowel /j/ – treating it as a single vowel in the combination /ju/ (as in words such as few /fju/ and queue /kju/) and not as a consonant cluster. [go back]

(2) The word rime is used here to differentiate it from the concept of poetic rhyme. This distinction is not made by all linguists, however, and the word rhyme is sometimes used. [go back]