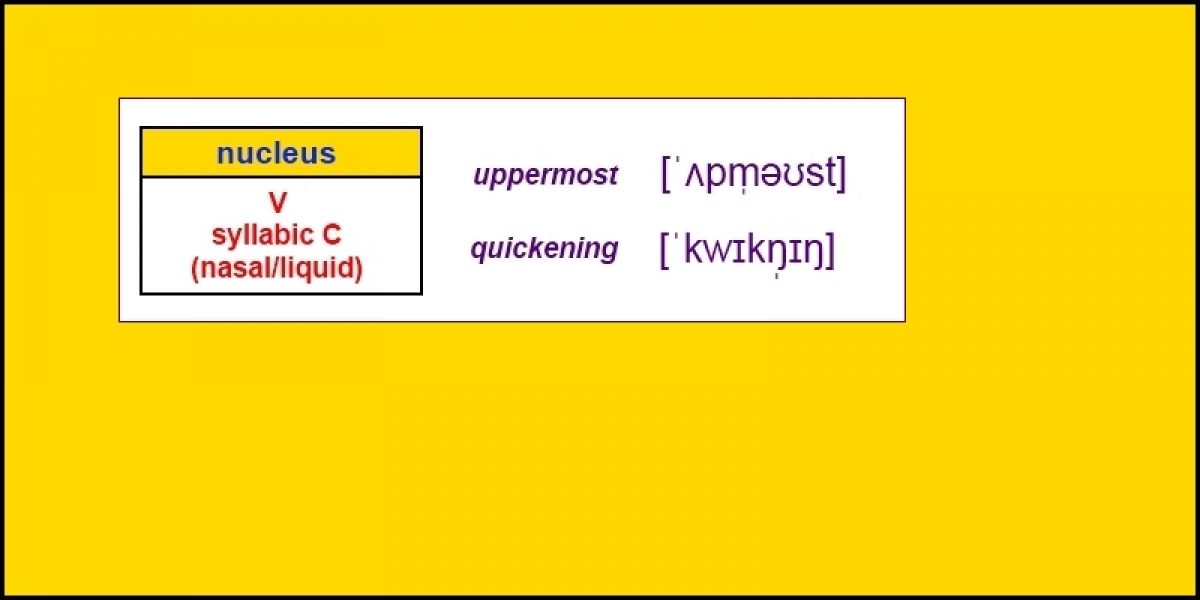 We have seen elsewhere (see Syllables and Clusters) that English syllables generally:

In addition, the nuclei of syllables are usually vowels. However, it is possible in some instances for the nucleus slot to be filled by a syllabic consonant. Typically, only nasals and liquids occur as syllabic consonants. We can represent the structure diagrammatically as follows.

Consider the syllables that make up the following word.

The first syllable /gɑ/ consists of a CV sequence and the second syllable /dən/ of a CVC arrangement. The first syllable is said to be a stressed syllable, i.e. it is given more weight, more emphasis, when spoken. The first syllable is consequently given more prominence through this increased loudness. The second syllable is an unstressed syllable. In unstressed syllables that end in /n/ the immediately preceding vowel is usually the neutral vowel /ə/ (also known as schwa). In certain situations, such as in connected speech, a reduction may occur that results in the neutral vowel being omitted. This results in the final /n/ taking on the full measure of the syllable. This is known as syllabic-n and it is transcribed in IPA (International Phonetic Alphabet) as [n̩]. Thus:

We see, therefore, that the second syllable no longer contains a vowel. Further examples of syllabic-n include the following.

As well as the occurrence of syllabic-n in unstressed syllables, syllabic-m can occur in similar environments. Examples of syllabic-m, which similarly take the full measure of a syllable, i.e. taking the nuclear vowel slot in the syllable, include the following.

In certain environments, the third English nasal /ŋ/ may also occur as a syllabic consonant. Consider the following:

Here, the /ən/ sequence is compressed. Such compression could plausibly yield syllabic-n in the nuclear vowel slot, i.e. [ˈbɹəʊkn̩]. Further, in some instances, the occurrence of a velar plosive (here /k/) adjacent to a nasal (here /n/) leads to the nasal assimilating a feature of the velar plosive. Now, it occasionally happens that the nasal assimilates the place of articulation of the velar plosive /k/, i.e. the velar position. This yields a velar nasal. Of course, the English velar nasal is /ŋ/ (as in the word wing /wɪŋ/). Hence, we can argue that [ˈbɹəʊkn̩] undergoes an assimilatory process to yield [ˈbɹəʊkŋ̩]. This assimilation is more likely to occur if the nasal consonant /n/ occurs between two velar consonants, as in the following example.

Examples of syllabic-l filling the vowel slot in unstressed syllables include the following.

Rhotic accents are accents in which /r/ can occur before consonants (e.g. as in park /pɑrk/, cart  /kɑrt/, card /kɑrd/) and before pauses (e.g. as in core /kɔr/, car /kɑr/, bar /bɑr/). The majority of American English accents are rhotic but the Standard British English accent is non-rhotic. Standard British English pronunciation of the immediately prior examples would be: park /pɑk/, cart  /kɑt/, card /kɑd/ and core /kɔ/, car /kɑ/, bar /bɑ/. Syllabic-r is widespread in rhotic accents but severely limited in non-rhotic accents. Roach (2009:70) provides the example of the word particular, which is likely to be pronounced as /pr̩tɪkjəlr̩/ by most Americans in careful speech, i.e. with syllabic-r, but as /pətɪkjələ/ by Standard British English speakers.

In all of the examples presented above, we focused on words in which only one syllabic consonant is present. However, it is not difficult to find words with two adjacent syllabic consonants. Roach (2009:71) provides the following examples:

(1) Speech sounds enclosed in parentheses ( ) are optional elements, such as the occurrence of /r/ before a consonant in American English but its non-occurrence in Standard British English. [go back]