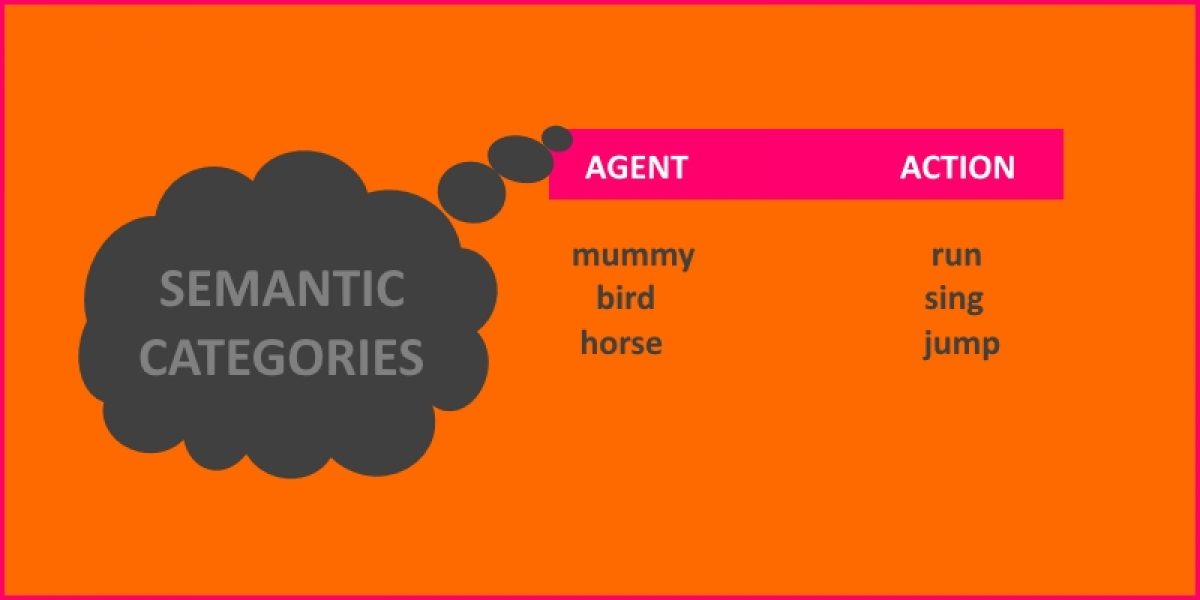 Brown noted that children usually make a distinction between animate beings and inanimate objects. Animate beings are things that are alive such as dogs, cats, horses, people, and so on. All of these are capable of acting under their own volition. Brown used the term AGENT to describe the semantic category that includes words that refer to animate beings. Examples of AGENT words would, therefore, include mummy, daddy, Fido.

In contrast to animate beings, inanimate objects are not alive and they are, therefore, not capable of acting independently or of making decisions. The semantic category used to include all inanimate objects is simply labeled OBJECT. This category would, therefore, include such things as table, spoon, cup, and similar, usually concrete, objects.

A third semantic category is that of ACTION. Words in this category which express the idea of action include such words as kick, run, bark, and so on.

Words in this semantic category express the notion of place. They may indicate where an AGENT or OBJECT is, or moves to, and where an ACTION is performed. Examples include garden, house, bath.

A common relation found in the majority of children between the ages of about 20-30 months is that of AGENT + ACTION. Consider the following.

Here the word daddy represents an animate being, one that can act by its own will and make independent decisions. The word go expresses the meaning of an ACTION, in this case ‘going’. A further example is set out below.

Again, dog refers to an animate being. Whilst a dog may not be considered capable of making decisions in the same way a human is, it nevertheless is alive and can act independently. It is, therefore, considered to be an AGENT. The word bark is another expression of an ACTION – in this case, an action typically associated with a dog and not a daddy! Further examples include the following.

Another common semantic relation is that of ACTION + OBJECT. Here is an example:

Here, kick is an ACTION in the same way that bark was considered an ACTION in dog bark and go was considered an ACTION in daddy go. The inanimate OBJECT in this two-word utterance is clearly the ball. Now, the exact meaning the child intends when uttering a phrase like kick ball needs to be gleaned from the context in which it is said. For example, if the child is kicking a ball then this utterance may be intended to mean, ‘I’m kicking the ball’. However, if the ball is on the floor in front of you and the child points to you and says, ‘kick ball!’ then this may be meant as, ‘you kick the ball now’. The first interpretation is more like the child describing what he or she is doing and the second more like giving an instruction. Further examples of ACTION + OBJECT include the following.

Consider the earlier example of an AGENT + ACTION, daddy go. Using this as the foundation, the child can expand it by adding a third semantic category. For example, the child may add the category of LOCATION as follows.

Here, home represents a LOCATION to which daddy may go. The child has, thus, expanded the AGENT + ACTION combination to the longer and more specific AGENT + ACTION + LOCATION. It is easy to see, then, how two-word combinations can be used as building blocks to produce a variety of different meanings by the addition of different LOCATION words. Further examples include:

A similar development can be seen by reconsidering our earlier example of kick ball which was described as an ACTION + OBJECT. Again, the child can expand this two-word utterance by the addition of a LOCATION word. For example, the child could indicate where he or she wishes to kick the ball:

Once again, garden represents a LOCATION word and the utterance has expanded from the two-word building block of ACTION + OBJECT to ACTION + OBJECT + LOCATION. Further examples include:

Obviously there are more possible combinations and expansions of two-word utterances than we have space here to consider. However, the examples provided should give some idea of the systematic and logical way in which children develop longer utterances. An additional, and rather useful way, is by combining one or more utterances with the word and (see Lengthening Utterances with ‘And’).