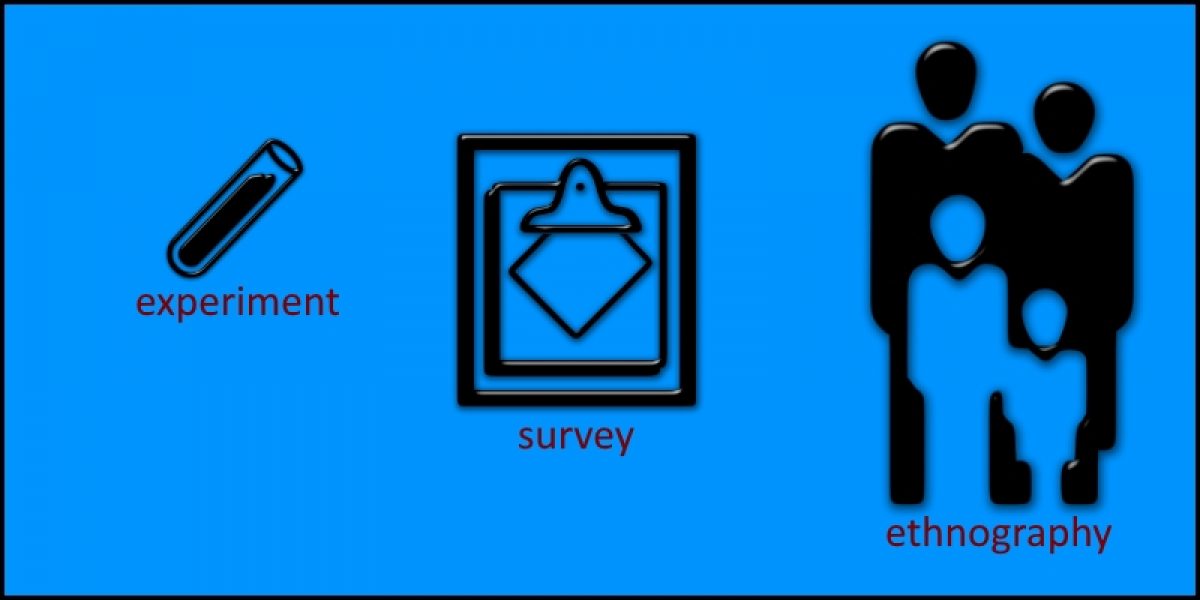 Several social scientific research methods are used to investigate speech, language and human communication. There are three principal approaches: (1) experiments, (2) surveys, and (3) ethnography. This article sets out the strengths and weaknesses of each and provides a glossary of common terms.

Social research is a method of enquiry which measures, describes, explains and predicts changes in social and economic structures, attitudes, values and behaviors and the factors which motivate and constrain individuals and groups in society. Much research into human communication uses social scientific methods. Whilst there are many research methods for investigating aspects of people’s speech, language and communication, they can be usefully categorized under the following three broad approaches.

An experiment is a study in which all the relevant variables are controlled and manipulated by the experimenter (so as to be able to specify causal relationships), rather than simply observed in their natural setting. They are designed such that they provide a valid and unambiguous test of the research hypotheses by controlling for all potential extraneous variables. They are typified by the experimenter performing systematic and carefully controlled changes in the environment of the experimental group. The aim of this is to test the effects of the independent variable, i.e. the variable which causes a change in the variable which is to be measured (the dependent variable). The experimental group is the group of people to whom the experimental treatment is given. The effect(s) on this group is compared with the effect(s) on a control group (of similar people) which does not receive the experimental treatment.

The main advantage of experiments is that strong conclusions can be drawn about cause and effect relationships. Their main disadvantage, as far as the social sciences are concerned, is that they often present insurmountable practical and ethical limitations to the manipulation of people.

Experiments place great emphasis on reliability (the extent to which a test or measuring instrument would give consistent results if applied on more than one occasion to the same people under the same conditions). The emphasis on generalization (the extent to which the research findings hold true for subjects or settings other than the ones used by the experimenter) is also generally strong as is the attempt to control extraneous variables. However, generally little emphasis is placed on the setting or the description of explanatory variables. The data yield for experiments is nearly always numerical, i.e. providing quantitative data.

Most surveys are conducted with only a relatively small proportion of the total population under investigation: this is a sample survey. If the total population were sampled (i.e. a 100% sample survey were to be conducted) this would be a census. Samples must, therefore, be representative of the whole population with respect to the characteristics, constructs or variables of interest. If the sample is typical of the greater population, then it is possible to generalize beyond the sample to the population. Surveys typically require a sample of respondents to respond to a number of (usually) fixed questions under comparable conditions. By using the same questions for each respondent in the sample, comparisons of individuals in the sample can be made. Surveys may be administered in a variety of ways. For example, an interviewer may complete a proforma for each respondent by asking each respondent each of the survey questions face-to-face or over the telephone. Similarly, a questionnaire could be sent to each respondent in the sample for self-completion, either as a hard copy or online.

The main advantage of surveys is that information from large samples can be collected quickly and relatively cheaply. Additionally, comparisons between individuals can be readily made because the answers to the questions are comparable. The main disadvantage is that surveys produce superficial answers, particularly when attempting to measure sensitive, difficult or potentially embarrassing aspects of behavior.

As with experiments, surveys generally emphasize reliability and generalization. Analytic surveys also place strong emphasis on control of extraneous variables (usually by statistical controls after data collection). Descriptive surveys, however, place no emphasis on the control of extraneous variables. Similarly, there is little emphasis on the setting or the description of explanatory variables. The data yield is often numerical, although some surveys are designed to provide types of qualitative data.

This style of research originated in the methods of social anthropologists who studied at first hand the beliefs and customs of simple societies. These were often in Africa, the Pacific and the Americas during the early twentieth century. The method of investigation that was developed was known as fieldwork and involved the observation of small, preliterate and relatively homogenous cultures in their natural habitat. Nowadays, the observation of so-called natural social processes is no longer restricted to simple societies and the methodology of ethnographic fieldwork is frequently applied in post-modern, industrialized and complex societies. Typically, the methodology is used for investigating small groups within complex societies. Participant observation is a favored fieldwork strategy. This often involves participating in, and sharing the work of, the social group as an ordinary member over an extended period of time.

The main advantage of ethnography is its emphasis on naturalism. The main disadvantages are that it is laborious, time-consuming and that there is both low representativeness and reliability.

Ethnography, therefore, places little emphasis on reliability and generalization. The control of extraneous variables will depend very much on the stage of the research: ethnographers will use progressive focusing for the refinement and development of emerging research ideas and themes and the systematic search for disconfirming evidence. The emphasis on the setting and the description of explanatory variables is strong. The data yield is predominantly qualitative.

How to Write a Research Proposal
Personal Distress and Normality
Can Speech Therapy Help People with Schizophrenia?