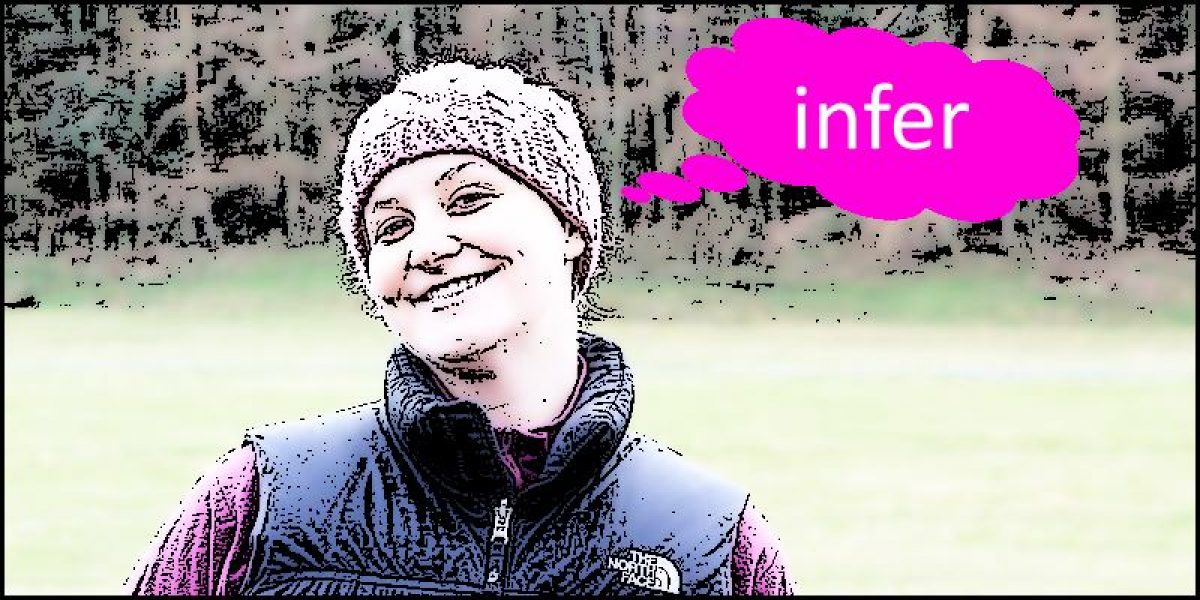 All communication is inferential

Human communication, whether verbal or non-verbal, is primarily a matter of inference and language is the add-on. This may seem a peculiar way of describing something that is so central to human communication. However, let’s take a short diversion to set this in a wider context: the context of the evolution of humans.

Modern biologists point to the dramatic increase in brain size in the evolution of humans. It appears that the brain size has increased three-fold over the past three million years when comparing the brains of Australopithecus, Homo habilis, Homo erectus/ergaster, archaic Homo sapiens through to modern Homo sapiens.

Richard Dawkins (2006) has speculated that this dramatic expansion can be explained by software/hardware co-evolution (1). He conjectures that “a minor improvement in hardware [i.e.] a slight increase in brain size” in our hominine ancestors may have “enabled a new software technique” – a new way of making advantageous use of the improved hardware (2006, p. 294). “The new software [in turn] changed the environment in which brain hardware was subject to natural selection. This gave rise to strong Darwinian pressure to improve and enlarge the hardware to take [further] advantage of the new software” (2006, p.294). In this way a so-called self-feeding, co-evolutionary spiral got underway: improved software capabilities ‘demanded’ bigger hardware, and bigger hardware enabled more sophisticated software development, and so on. 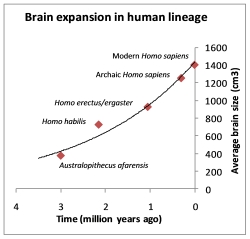 We can understand something of the explosive nature of such self-feeding spirals through direct analogy with computers. I recall gathering in a laboratory in 1980 with around thirty other interested persons for a demonstration of one of the first home computers, the Sinclair ZX80. With a mere 1k of RAM memory we were treated to the sight of small black and white squares bouncing around a television screen that provided the visual output. Nowadays, 1k of main memory RAM seems woefully inadequate in comparison to today’s home PCs, when gaming computers come already supplied with a minimum of 1GB of RAM in the graphics card alone. Anything less than 6-8 GB of main memory RAM in a laptop gaming PC is likely to be considered inferior (at the time of writing, January 2011). In fact, there has been an exponential increase in computing power over the last four decades or so, with computing capacity doubling about every 1.5 years. [This statement is a variation on what is termed Moore’s Law.] There is an inevitable relationship between hardware and software development. Improved hardware enables more sophisticated software developments – more sophisticated software development demands lead to increased hardware capacity, and so on. So, we can see by analogy with modern computer development how brain hardware/software co-evolution may have begun and been maintained.

What triggered the software development?

What was the software development that triggered the self-feeding spiral? It is suggested that it was the very thing that we have just been doing – thinking by analogy. The evolutionary leap appears to be related to the development of representational capacities, i.e. the ability to think by analogy, to understand that one thing can be used to represent another thing or idea, and that this may be used to enhance communication.

We have noted elsewhere (see Inference) Dan Sperber’s (1995, 2005) identification of the human ability to make sophisticated inferences. He notes that, “If you are able to infer other people’s beliefs from their behavior, you can benefit from their knowledge and discover facts of which you yourself have no direct experience” (1995, p. 198). Sperber speculates that an early male hominine may have observed a female hominine picking a type of berry that he had never seen before. What might this early ancestor have understood by her behavior? Well, if he appreciated this as little more than physical movement then not much would be gained from the observation. However, if he was capable of understanding this movement as an intentional act – the intelligent act of another intelligent animal – then such an insight may well be of benefit. Indeed, if he were able to infer from the female’s behavior not just an intention (to gather berries) but also her beliefs (that these particular berries are edible) then he would most certainly benefit.

Sperber asks us to suppose that the female’s intention was, in fact, to inform the male that the berries were edible. If the male is capable of understanding that her purpose is to inform him then the female need no longer actually pick the berries. She can simply use symbolic means to communicate. For example, she could point to or stare at another type of berry and imitate eating. The male can then infer that this other berry type is also edible. The two are, therefore, communicating. But note that this is not linguistic communication but it is most certainly effected by the ability to infer. We have already noted that linguistic communication allows far more efficient communication and, if we accept Sperber’s account, we can understand how language was the add-on, evolving after humans’ developed the ability to infer meaning from others’ actions.

Dawkins (2006) similarly speculates that as our hominine ancestors became hunter-gatherers, they would have gained experience of following animal trails – perhaps by recognizing the animals’ footprints in the earth. They would be familiar with different shaped footprints. Perhaps seeing a lion’s footprint aroused fear? In this way one thing (the imprint of a lion’s paw in the ground) represented something else (the probability of danger). Dawkins further speculates that representational images may likewise have developed from the observation of animals’ impressions in the earth – perhaps observing the body shaped imprint of a whole eland where it had fallen and baked in mud? Perhaps events such as these led to the realization that animals could be represented by drawing them – either whole or in part – in two dimensions on a cave wall or in the dust. Such representations may have been used to indicate to others the types of hunt that would be undertaken. It is also, surely, not too improbable to imagine that that such hunters, familiar with their terrain, began drawing maps in the earth to represent the spatial (and time) relationships of an intended hunt.

Representational thinking, then, would greatly enhance communication. Now, language is a representational system. A limited set of speech sounds is combined in differing ways to construct syllables, words and sentences (clauses). The word lion, for example, whether spoken or written, is not itself a lion but only an arbitrary symbol that, by the consensus of the group of people we are communicating with, is agreed will represent the actual animal. Language is, therefore, often proposed as the software trigger for the explosive development of the human brain. However, it seems to me that some degree of representational thought must have come first. Hominines who were already able to infer that ‘one thing represents another thing’ would all the more readily generalize such analogizing to the emergent, systematic speech sounds of others. In this way, then, human communication can be viewed as primarily inferential (because representational thought was required first) and language, being well suited to take advantage of humans’ capacity for representational thought, was added on later.