You are here: Home > Language > Pragmatics 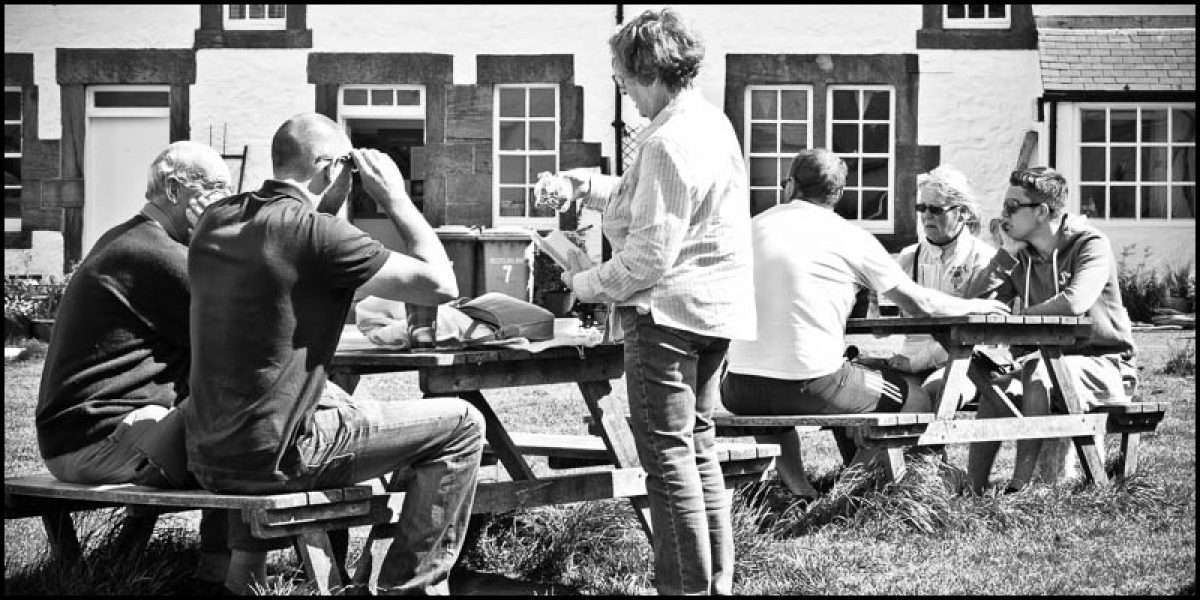 Simply put, pragmatics is the study of the use of language in context. fIt is a subfield of linguistics which studies how people comprehend and produce communicative acts in real world speech situations, usually a conversation. It considers the participants’ knowledge about such things as social distance, social status between the speakers, cultural knowledge such as politeness, and both their explicit and implicit linguistic knowledge. The ability to comprehend and produce a communicative act is referred to as pragmatic competence. Pragmatics, then, examines the factors that influence our choice of language in social interactions and the effects our choices have on others.

The two utterances are quite distinct in terms of their grammar, vocabulary and pronunciation. The first is spoken in the Geordie dialect of north-east England, whilst the second conforms more closely to a so-called Standard English (i.e. a prescriptive grammar which declares how sentences should be constructed and how words should be pronounced – typically the standard taught to non-native speakers who are learning the language).

For those of you who are unfamiliar with Geordie, the meaning of the first utterance can be gleaned from reading the second utterance. This is because the two are essentially equivalent in meaning (hoy = to throw or to pass; stottie = a type of soft, white bread). Moreover, the same person spoke both utterances. Which one do you suppose was uttered in an informal setting and which one in a formal setting? Most people tend to think that the first utterance is more informal than the second rather formal request. In fact, the first utterance was overheard being spoken by a male teenager at a school party with his classmates and the second by the same teenager at an inter-school buffet lunch with pupils and teachers from different schools whom he had never met before.

It is a fairly common feature that the more standardized language tends to be spoken in formal settings. Most people exhibit this ability to shift the style of their communications to suit the occasion. The more standardized English is sometimes referred to as acrolect (i.e. the social dialect most closely resembling the standard language, often regarded as the most prestigious dialect) and the more informal as basilect (i.e. the social dialect that is furthest removed from the standard language, often regarded as the least prestigious variety). These terms are somewhat confusing, however, as they may imply that basilect is not as creative or flexible as acrolect. This would be a mistake, as basilect demonstrates great variety and creativity with respect to syntax, morphology, vocabulary, phonology, and so on. Style shifting is based on a speaker’s assumptions regarding what is, and what is not, appropriate for a particular situation.

This list is by no means exhaustive. Also, it is important to note that we are not usually influenced by just one factor at a time. Typically, a number of factors interact to influence our choice. A 37 year old male speech and language therapist speaking to a female teenager about her articulation difficulties in a hospital clinic may choose quite a different style to a 37 year old female accountant talking to her teenage son about her imminent separation from his father.

The common, everyday use of language may be varied in several ways from the standard grammar. The main alterations occur in relation to (1) morphology, (2) syntax, (3) vocabulary, and (4) phonology.

One example of morphological variation is the amongst/among distinction:

In these utterances the so-called irregular simple past (took and gave) has replaced the irregular past participle (taken and given). According to Standard English this would be considered incorrect and the utterances should have been rendered as I’ve taken it and she’s given it to me. However, this sort of variation is quite common in the Tees Valley area of the north-east of England, for example.

Changes to vocabulary changes are the most common variation. They can be divided into four types:

Highly informal, non-standard words and phrases, generally avoided in formal speaking and writing. Slang typically has its origins within a particular subculture. Examples include spondoolee, moola, bread and wad for ‘money’ and wheels for ‘car’.

Specialised vocabulary used by persons in the same work or profession. The words are often only partially understood by outsiders. Jargon is useful because it allows members of a profession to communicate clearly and concisely with a minimum of ambiguity. Examples drawn from the speech therapy profession include nodules (non-malignant calluses on the vocal cords) and holophrase (a single word used by infants which has the force of a whole phrase).

The secret vocabulary of underworld groups. Examples include snuff, blow away and waste which mean ‘to kill’.

Interjections, or vocatives, are exclamations such as oh, mm, uh huh, yeah and well. They are frequently inserted into a conversation by the current listener to indicate attention and to acknowledge what is being said. In addition, they may be used to express an emotional reaction to what has been said, e.g. really? and well, I never! There is evidence that women are more prolific users of interjections than men and that men and women use different types of interjections.

Phonological variation refers to the ways in which particular speech sounds may be altered in the spoken word, according to the geographical and/or social environment. Consider, for example, the pronunciation of the word scone (the small, light, rounded sweet or savory cake typically baked in an oven). In England there are two main ways of pronouncing the vowel in this word. It may be short, as in the words con, hot and lock, or it may be long, as in the words cone, low and so. The selection and use of either the short or long vowel varies by geographical region. So, for example, the short vowel version of scone is generally favored in the Tyneside area of the north-east, whereas the long vowel is the predominant form in Devonshire within the south-west. In addition to these geographical differences, vowel selection may also be influenced by perceived social status.

The relevance of style shifting

The ability to shift style is considered to be a relevant pragmatic skill. Most persons are able to consciously shift their style to suit the occasion. However, particular people may have difficulty doing so. One example is persons with learning disabilities. Many people with learning disabilities are regularly perceived to be too familiar and intimate with strangers. This is often because they are unable to shift from an informal style to a more formal style of speaking, i.e. they may speak to all persons in the same casual style. In some cases the listener may feel that the person with learning disabilities is being ill mannered because, for example, they are not being addressed with what they perceive to be an appropriate and respectful term. People who have sustained a stroke may present similar features. A stroke may result in disruptions in both speaking and writing and, because style shifting has relevance for both speech and writing, an inability to shift style may militate against the person taking up work which involves a lot of writing or interaction with the public. This, clearly, can have a severely debilitating effect on a person’s lifestyle.