You are here: Home > Grammar > Phrases 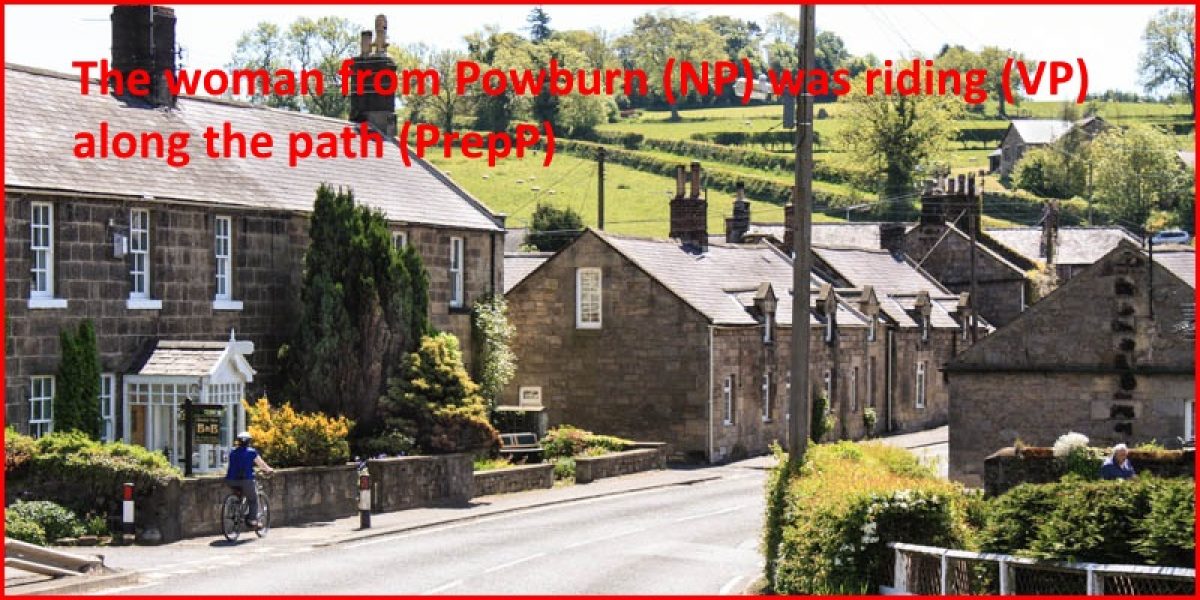 What is a grammatical phrase?

This utterance cannot helpfully be viewed as just a string of single words, i.e. the + really + old + lady + from + Powburn….. + clock. Rather, there appear to be groups of words that fit together more readily than they do with other groups. In the above utterance, we can identify the following groups (although, admittedly, if you are new to grammatical analysis these may not be immediately apparent):

We call these grouping phrases. They represent an intermediate level of syntactic organization between the word what is known as a clause (see below).

Let us try and simplify this a little. Consider the utterance:

the boy hugged my dog

Notice that the words in this syntactically correct structure appear to combine into three units:

We can represent this diagrammatically as follows.

Each unit, or group of words, is a phrase. As mentioned, phrases represent an intermediate level of organization between the word and what is known as a clause, i.e. words do not combine immediately into clauses but, rather, into smaller units known as phrases. This key property of language is known as structure-dependence. We see that it is possible to change elements of phrases, e.g.

In addition, phrases can often be modified and/or expanded, e.g.

It should be evident that these phrases could be expanded and amended almost indefinitely. However, there are constraints on how phrases may be amended and so-called syntactic rules govern which words may be combined with which others. Similarly, there are syntactic rules which govern how phrases may combine to create meaningful utterances. For example, the following is an acceptable combination:

But the following is not:

It is arguable that this may still be interpretable but it does not conform to the syntax of English and, to a native speaker, this construction does not appear to be well-formed.

Each grammatical phrase in English can be further analyzed according to the type of head word that features in the phrase. So, returning to our example of the boy hugged my dog, we see that in the first phrase (the boy) the head word is a noun. Similarly, in the third phrase (my dog) the head word is also a noun. Phrases that consist minimally of a head noun are, unsurprisingly, called noun phrases (NP). Also, because pronouns can replace nouns, the head word in a noun phrase can also be a pronoun.

The second phrase consists of just the one word hugged. This is a verb and it is, therefore, the head verb in what is known as a verb phrase (VP). In reality, the head verb must be a so-called lexical verb. So, a phrase such as was hugging is also a verb phrase but this time it consists of the auxiliary verb was plus the lexical verb hug (in its ‘-ing participle’ form).

There are three other types of grammatical phrase in English:

Adjective phrase (AdjP): with an adjective as the head word, e.g. my little sister (NP) is (VP) crying (AdjP)

Adverb phrase (AdvP): with an adverb as the head, e.g. your older sister (NP) was singing (VP) sweetly (AdvP)

Phrases, then, may combine to construct larger units. We can see this by returning to our opening example of the lady from Powburn village was looking along the main road because she had been expecting the delivery yesterday. There appear to be two larger units:

These larger units are known as clauses. Clauses may be further combined into so-called clause complexes. And this is precisely what happens with our example, where the conjunction because is used to conjoin/join together the two clauses: