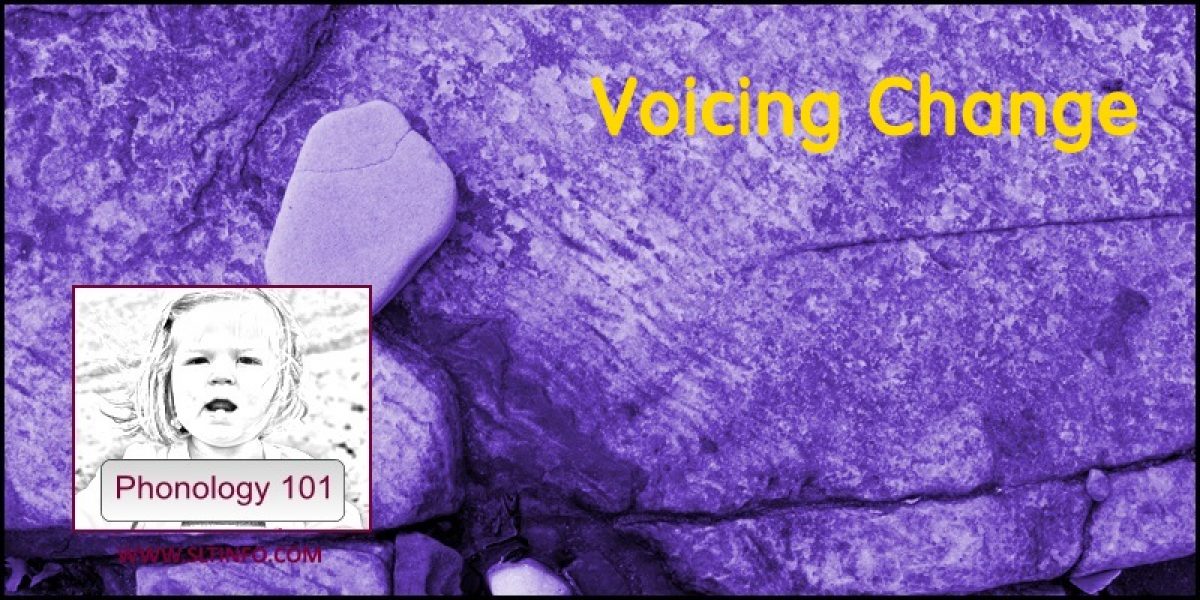 In principle, voicing change refers to any swapping of voicing of any two consonants in any position. So, for example, the word zoo /zu/ may be realized as /su/. Here, the initial voiced consonant /z/ is rendered voiceless as /s/. This is an example of voice change. However, we must remember that in this section we are considering assimilatory processes.

To recap, assimilation only takes place when one speech segment is transformed into another owing to the influence of a neighboring segment, i.e. it invariably involves a transfer of feature(s) between two neighboring segments. In the example of /zu/ → /su/ there are only two segments involved, the initial consonant and the vowel. Given that it is the consonant /z/ that has changed voicing, this is the affected segment. However, it is not clear how the second segment (the vowel) causes this change. This type of voicing change is not, therefore, an assimilatory process. Two true
assimilatory processes that exhibit voicing change are (1) context-sensitive voicing, and (2) word-final de-voicing. These will now be discussed in turn.

Children between the ages of 2;00-3;00 years appear to find it easier to produce voiced consonants when they appear before a vowel, i.e. in prevocalic position. The reason for this is thought to be because the voicing of the consonant anticipates the immediately following voicing of the vowel. The child appears abler to commence and sustain the vibration of the vocal folds for the consonant when this is carried through into the immediately succeeding vowel. Consequently, it is potentially easier for a young child to say /bi/ than /pi/ because both the /b/ and /i/ are voiced in /bi/ whereas there is a change from voiceless /p/ to voiced /i/ in /pi/. In summary, children up to the age of about 3;00 years may systematically voice any voiceless consonants that precede vowels. This is context context-sensitive voicing, i.e. replacing a voiceless consonant that appears before a vowel with a voiced consonant. Since the affected segment (the voiceless consonant) always precedes the segment that causes the assimilation (the vowel), this process is always regressive. Recall from Table 13 (see  Assimilation) that another name for regressive assimilation is anticipatory assimilation, i.e. in anticipation of the upcoming causal segment, the affected segment assimilates one of its features – in this case it is the voicing of the vowel. It is in this sense, therefore, that we claimed that the voicing of the affected consonant ‘anticipates’ the immediately following voicing of the vowel. Further examples of anticipatory context-sensitive voicing include the following.

In each of these examples the voiceless consonant assimilates the voicing of the immediately following vowel and is replaced with its voiced counterpart, i.e. /t/ → /d/; /θ/ → /ð/; /s/ → /z/.

Voicing of voiceless consonants in postvocalic position (e.g. cat /kæt/ → /kæd/) is uncommon, as there is a tendency to de-voice any voiced consonants at the ends of words. This so-called word-final de-voicing is discussed next.

As indicated above, context-sensitive voicing is typically eradicated by 3;00 years of age.

We have already noted that children between the ages of 2;00-3;00 years may find it easier to produce a voiced consonant before a vowel. In contrast, children of the same age seem to find the production of voiceless consonants simpler than the production of voiced consonants when they occur at the ends of words. This observation is also thought to be explained by anticipatory assimilation, i.e. the word-final consonant anticipates the upcoming silence at the end of the word. Accordingly, the young child may find it easier to say /kæp/ than /kæb/. This feature may be used systematically throughout a child’s speech, i.e. the word-final consonant is de-voiced. Consider the following:

We see clearly that the final voiced consonant /b/ has been de-voiced to its voiceless counterpart /p/. In this assimilatory process, therefore, the affected segment is the final voiced consonant in the word. However, the segment causing the assimilation is not another speech sound or syllable but the silence that follows the word. In sum, this is an anticipatory (regressive) process in which the affected segment anticipates the influence of the upcoming segment that will cause the assimilation. Here, the final consonant in the word anticipates the upcoming silence at the end of the word and assimilates the voicelessness of the silence to yield a voiceless consonant. The following are further examples of word-final de-voicing.

As with context-sensitive voicing, word-final de-voicing is also eradicated in most children by 3;00 years of age.