NB: This sub-section discusses Labial Harmony which is a particular type of Consonant Harmony.

As well as velars functioning as triggers, labials can also act as triggers. When a labial consonant triggers the assimilation of a target consonant then this is known as labial harmony. Once again, alveolars are particularly susceptible to this type of consonant harmony. Consider the following, in which an initial alveolar is the target of a labial consonant.

The target voiceless alveolar plosive /t/ assimilates to the same place of articulation as the triggering /p/, retaining its voicing and manner of production, to yield /p/. We see that the resultant syllable contains two bilabials, i.e. the consonants have harmonized. As the target precedes the trigger this is an example of regressive labial harmony affecting alveolars. Here are some more examples:

This process can be seen to operate in typically developing speech up until about 1;07 years. In contrast, progressive labial harmony affecting alveolars stops a little earlier, at about 1:07 years. Here are some examples:

There are several other patterns of consonant harmony but the above should have given you a reasonable idea of the general principles governing this process.

Let us reconsider our first example of labial harmony:

We have argued here that the target tongue tip /t/ assimilates to the same place of articulation as the triggering labial /p/, i.e. the consonants harmonize. However, replacing a tongue tip consonant with a labial consonant also comes under the definition of labialization. So, how do we know which underlying process is operating here? The answer is, again, to determine whether or not the target consonant changes in contexts lacking the triggering bilabial. Since labialization is a systemic substitution it can operate in CV and VC contexts. In contrast, labial consonant harmony is an assimilatory process that must operate across an intervening vowel. Figure 12 sets out some possible test words. 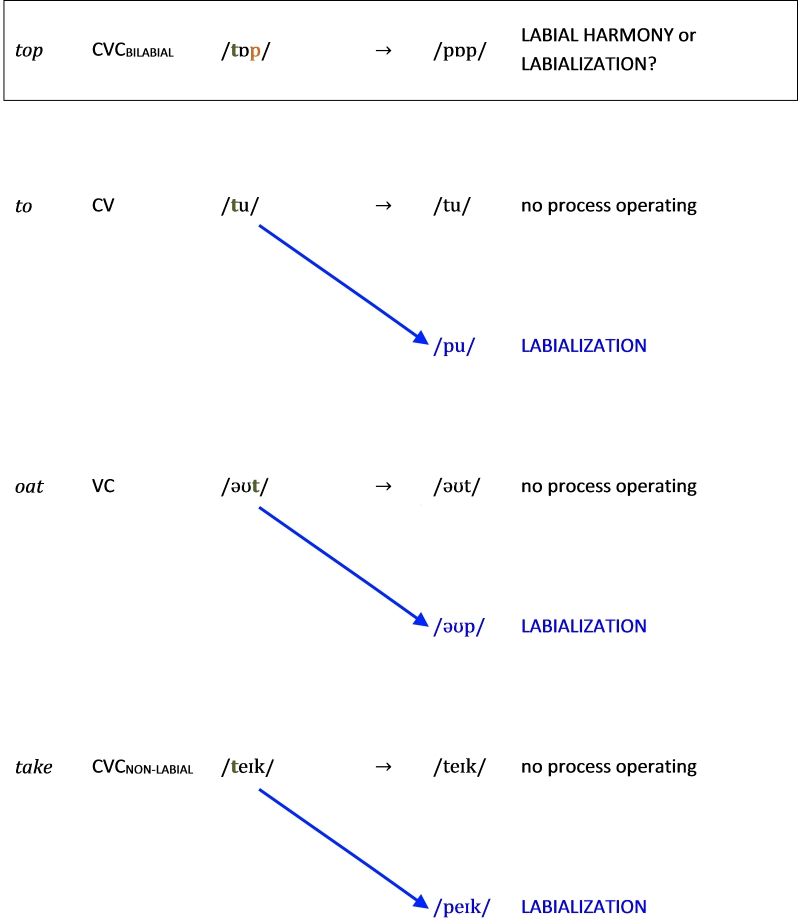 We see that none of these test words contains a bilabial. Now, if each word is realized as the appropriate adult form then there can be no process affecting the consonant /t/. It is not labialized
and it does not harmonize. In fact, harmonization would be impossible in these words because there is no context in which a neighboring consonant is a labial, i.e. CVCLABIAL. However, if /t/ were realized as /p/ in any test word then this would indicate labialization. So, if the word top is realized as /pɒp/ but the words to, oat and take are realized as the correct adult forms, then we can feel reasonably confident in claiming that the underlying process operating on the word top is labial harmony and not labialization.

In summary, labial harmony may be confused with labialization. Therefore, investigators need to determine whether or not the target consonant changes to a labial in contexts lacking a labial.

This comparative approach to analyzing phonological systems is, in principle, straightforward. However, owing to the large number of phonological processes, investigators need a way of ensuring that they do not overlook any possibilities. Typically, therefore, investigators will use published phonological assessments that sample a large number of speech sounds in different contexts, and organize the analysis in an efficient and logical way. These assessments typically use picture-naming and picture-description tasks to elicit a sample of speech. Using these assessments usually requires special training.