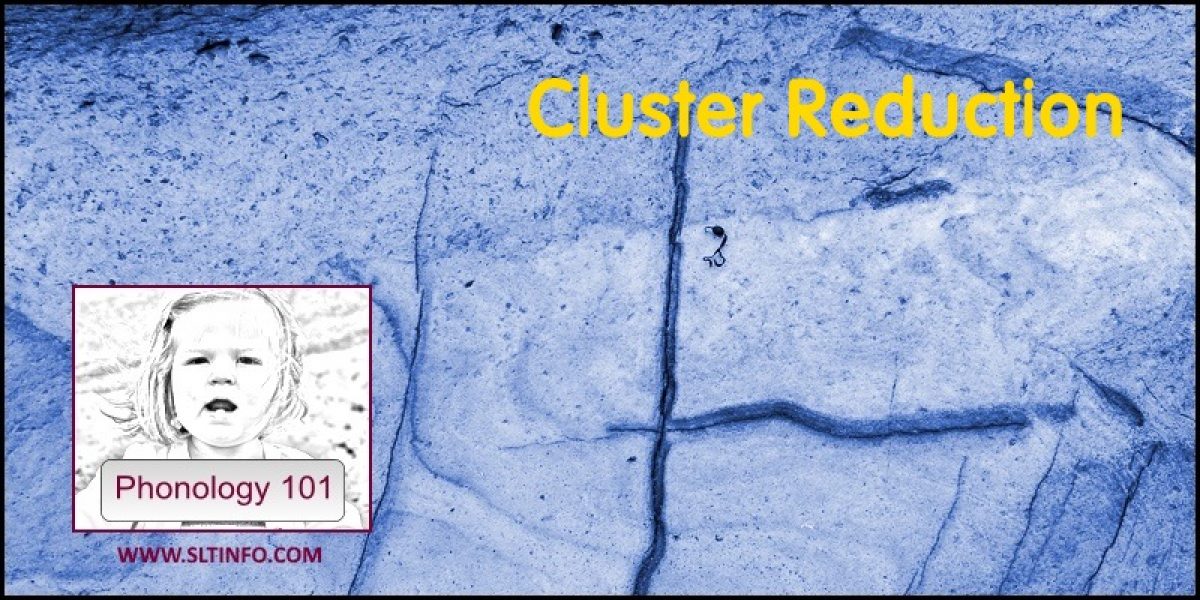 Recall that the most structurally simple words in English consist of just one vowel, e.g. a in a ball and I as in I know you. Consonants can either precede a vowel to make a CV word, e.g. car /kɑ/and go /gəʊ/, or follow it to produce a VC word, e.g. ark /ɑk/and oat /əʊt/. Various combinations of consonants and vowels may occur but most words have at least one vowel. Some words are structured with clusters of more than one consonant in a sequence. Examples include, plan /plæn/ (CCVC), flow /fləʊ/ (CCV), brown /braʊn/ (CCVC), splash /splæʃ/ (CCCVC). As these clusters involve a complicated co-ordination of the vocal apparatus to produce a smooth transition from one consonant to another, it may be too difficult for some children, depending upon their age (and, therefore, their neurological and motor development). As a consequence, a child may reduce the cluster by deleting it completely, e.g.

This is known as total reduction because the entire cluster is omitted.

Alternatively, the cluster may be partially reduced by only articulating one of the consonants, as in the following two examples.

Consequently, this type of reduction is known as partial reduction, i.e. at least one member of the cluster is still produced.

The three examples above all involve reduction of consonant clusters which occur at the beginnings of words. This type of structural simplification is, therefore, known as initial cluster reduction. Further examples include:

We have noted that consonant clusters do not just appear at the beginnings of syllables, they can also occur at the ends of syllables, e.g. last /lɑst/ (CVCC), halt /hɒlt/ (CVCC) tents /tɛnts/ (CVCCC). As with clusters in initial position, these clusters may also be completely deleted or partially reduced. Examples of final cluster reduction include the following.

We will now take a closer look at some of the patterns of cluster reduction that typically occur in children between 2;00-3;06 years of age.

This pattern describes how so-called s‑clusters are typically reduced. The voiceless alveolar fricative /s/ can combine with several other consonants to produce two-consonant clusters such as /sp‑/, /st‑/, /sk‑/, /sm-/, /sn‑/, /sf‑/, /sw‑/ and /sl‑/. Typically, the cluster is partially reduced by omission of the initial /s/, leaving just the second consonant. Examples include the following.

There is also a limited set of s-clusters composed of three consonants. They are typically constructed as follows:

Examples, therefore, include /spl-/, /str-/ and /skw-/. The pattern of reduction of such clusters is potentially more variable. Here are some examples:

There are many two-consonant clusters constructed of an initial consonant and an immediately following approximant /w r l/. These clusters are often partially reduced to leave just the initial
consonant of the cluster, such as in the following examples.

For our current purpose we will define an obstruent as a plosive, fricative or affricate, i.e. consonants characterized by some form of stoppage or obstruction to the free flow of air from the lungs as it passes out through the oral cavity. There are two cluster reduction patterns which vary only in whether or not the obstruent is voiced or voiceless.

The three English nasals /m n ŋ/ can combine with voiceless obstruents to form two-consonant clusters which typically occur in syllable-final position. They are characteristically reduced to the voiceless obstruent (i.e. the nasal is omitted), as in the following examples.

Nasals also combine with voiced obstruents to form two-consonant clusters which, again, typically occur in syllable-final position. This time, however, instead of the cluster reducing to leave the obstruent intact, it is the obstruent that is omitted to leave just the nasal. The following exemplify this pattern.

As indicated earlier, the process of cluster reduction is operative in the speech sound systems of typically developing children between 2;00-3;06 years of age. Certainly, by 4;00 years we would expect this process to have been eradicated.