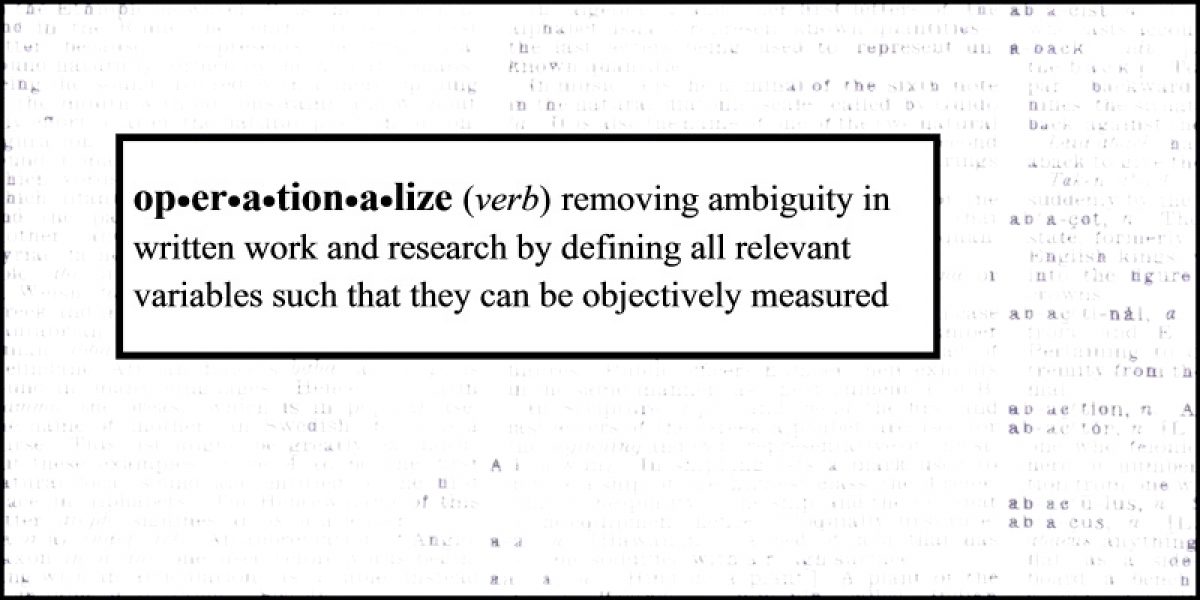 To remove ambiguity in written work and research, all relevant variables must be defined. This is known as operationalizing variables. To operationalize a variable or concept means to define it so that it can be measured and/or expressed quantitatively or qualitatively.

When approaching any written assessment, it is important to demonstrate that you are clear about the assessment task and the purpose of writing. This can be assisted through unpacking the question: (1) identifying the actions you must undertake (e.g. discuss, select, compare), (2) dividing the task into its constituent elements (e.g. reasons for X, reasons for Y, alternative procedures), and (3) operationalizing your variables. It is this last procedure that will be discussed here.

When planning any written work, it is important to consider how much shared knowledge one can legitimately assume exists between the author and the reader(s). For example, if I say that “the child failed the cloze procedure,” would you understand what I mean?1 If you are a teacher – and perhaps more especially a teacher of reading – then you will likely know what this refers to. However, you may not know what a cloze procedure is. If you can safely assume that your readership will understand this concept, then it probably requires little in the way of explanation. However, where there is any doubt or where greater specificity is necessary for readers to understand your argument, an explanation/definition must be provided in order to remove any potential ambiguities. These definitions are referred to as operationalizations and the process of creating them is known as operationalizing the variables.

In brief, to operationalize a variable or a concept means to define the variable/concept so that it can be measured or expressed quantitatively or qualitatively. Choonosing which variables/concepts to explicitly define in a written assessment is, as I have inferred, always a judgment call. However, it is usually necessary to give the reader some idea of how you are choosing to define a concept/variable. They can, of course, be defined in many ways. The approach that an author/researcher takes to defining terms will be influenced by his or her own background, training and the current purpose of the written assessment or report. For example, each of the following statements operationalizes the same concept of severe hearing loss: the first is quantitative, the second qualitative:

Some variables appear to be less complicated than others. For example, weight can be measured using the conventional unit of kilograms; height can be measured in meters. Other variables are not so simple. For example, how would you measure/define motivation? By the number of social clubs someone attends? By the number of times a person carries out physical exercise each week? The answers to questions such as this are not easy but it does highlight the need to be as specific as possible when operationalizing variables.

We have seen that it is legitimate not to explicitly define certain basic concepts if one can assume that the readership of your paper has a good background in the subject area. However, do be careful, as some concepts may seem transparent but with more careful consideration these too can often be seen to cause confusion unless specifically defined. For example, if I talk about a child’s speech as being delayed, what do I mean? Am I just referring to the child’s so-called phonetic inventory (i.e. all the speech sounds in the child’s language that the child can articulate in-line with the accepted adult pronunciation) or to the child’s phonological system (i.e. the methodical rules that the child employs when combining speech sounds in order to speak his or her particular language)? It may be necessary, therefore, to indicate to the reader what you mean by speech – just phonetics, just phonology or both? The task is to be as specific as necessary to support your arguments and conclusions.

Whilst this article has focused on the need to operationalize variables within written assessments and reports, the need to operationalize is especially important when conducting research. Typically, the research methodology is optimized so that as many extraneous variables as possible are controlled. In this way, any changes in the behavior of the research subjects (or other object of concern) can be assumed to have been brought about by the researcher’s manipulation of the situation and not because of any extraneous, interfering variables whose effects have not been controlled properly. In order to improve the validity of any measures we make, we must clearly operationalize the variables that are of concern.

So, for example, if I wish to know whether or not a particular therapeutic intervention has improved the language skills of a group of children with language delays, I must unequivocally
operationalize all relevant variables. A full consideration of this is beyond the scope of this article but an obvious variable that requires operationalizing in this example is language delay. Just how delayed must the delay be in order to qualify? Six months delay? Twelve months? More than 18 months? Also, what do we mean by language? Are we only concerned with measuring morphology? Or just syntax? Only semantics? Just pragmatics? A combination of these? And how would we define improvement? A gain of three months on their original score at the start of the therapeutic program? Four months? And how long should the therapeutic program run for? If the program runs for four months and a child makes a gain of four months over their original score during this period, has there been any improvement at all? Overall, research methodology is complex but this brief example does highlight the ongoing need to give due consideration to
operationalizing variables.