You are here: Home > Grammar > Nouns 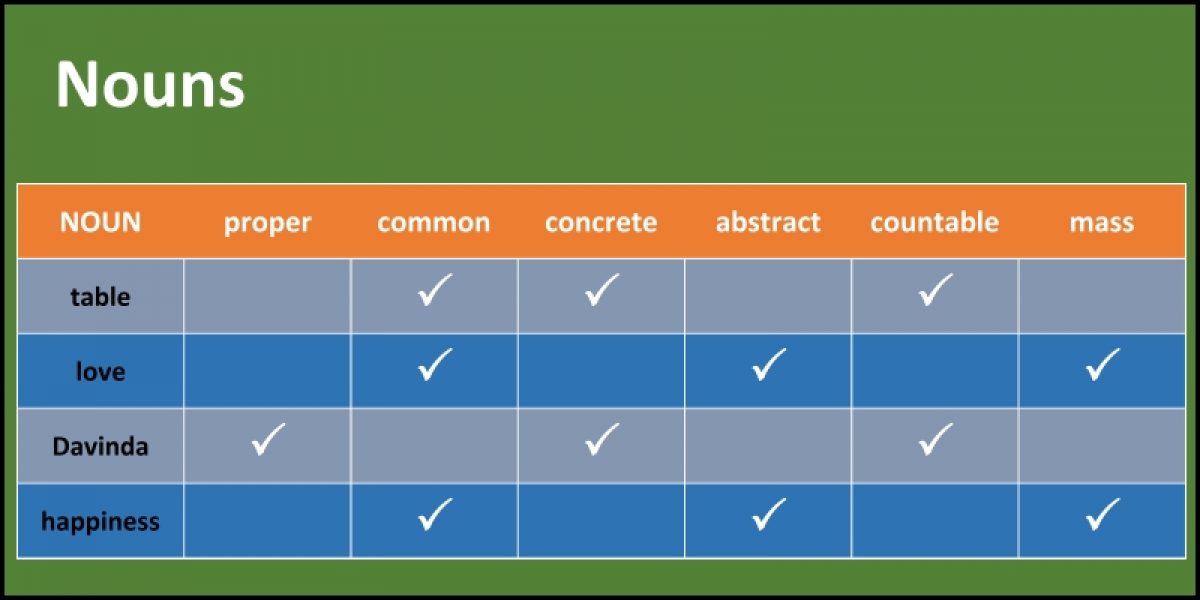 Nouns belong to an open class

Nouns compose by far the largest class of words. This is because they are generally used to name things. As there is an almost infinite number of things to be named the class is expansive. In addition, as humankind progresses, discovers and invents new things, so we need new words to describe these new things. This class is, therefore, constantly being added to – it is an open class (like lexical verbs, adjectives and adverbs).

By way of example, relatively recent new nouns in English include:

When more than one item is to be denoted, nouns appear in their plural form. The majority of nouns indicate number by adding an ‘-s’ or ‘-es’, e.g.

There are several other ways in which the plural form is constructed, depending on the word spelling. For example, some words ending in ‘-f’ delete the ‘-f’ and add ‘-ves’ (e.g. leaf/leaves). However, as this is not an article about spelling, these spelling rules will not be discussed further here. It is sufficient to note that nouns may appear in plural form.

When ownership of an item or idea is to be denoted, nouns appear in their possessive form. A possessive noun is typically formed by the addition of an apostrophe and sometimes an ‘-s’, e.g.

Nouns can be divided into two broad contrasting categories: (1) proper nouns, and (2) common nouns. These are described below.

These nouns refer to unique things, people, places, institutions, and so on, e.g.

In contrast, common nouns do not refer to unique things, people, and so on, but refer to a category of objects or to a specific instance of that category, e.g.

Collective nouns refer to groups of people, animals, places, things, ideas, emotions, and so on. The group as a whole may be given a name, e.g.

Arguably, collective nouns are a type of common noun. However, this category sometimes stands alone.

Nouns can be further subdivided into (1) concrete nouns, and (2) abstract nouns, as follows.

These nouns refer to perceivable, tangible objects in the world, e.g.

In contrast, abstract nouns refer to things that are intangible, such as ideas and emotions, e.g.

A third subdivision involves the notion of quantity and separates the nouns into (1) countable nouns, and (2) mass nouns.

These nouns represent objects that can be counted. This implies, therefore, that it is possible to have more than one of the object in question, e.g.

These nouns contrast with countable nouns in that they are uncountable. Examples include:

It is not generally possible to have, for example, two waters, three oils or four hays, and so on.

We can, therefore, describe every noun in the English language in terms of the above three contrastive categories, i.e. (1) common/proper, (2) concrete/abstract, and (3) countable/mass. For example, the word table would be described as a common, concrete, countable noun, whereas the word love is a common, abstract, mass noun. Nouns can, therefore, be represented diagrammatically, as exemplified in Table 1.

Note that whilst the word tension has been described in Table 1 as a mass noun, on the basis that one would not generally talk of ‘two tensions’, ‘three tensions’, and so on, it is possible to postulate occasions in which the noun could be described as countable. Consider the following.

there are three tensions in the political arena

On this occasion, the noun tension is in plural form because there is an implicit reference to an ability to actually count tensions (e.g. those from the far-right, the centre-left, and the far-left of the political arena). The same sort of argument could be assumed for the words ink and hay, which we earlier defined as mass nouns. For example, if one were thinking of different makes of ink or types of hay, one may be able to construct meaningful utterances such as:

we are considering the three inks available to artists

the farmer is sorting the four hays into separate barns

Thus, the description and meanings assigned to words is dependent upon their context of occurrence (see Semantics).

Beyond the Clause
Verb Phrases
The Function of Phrases within Clauses