You are here: Home > Language > Morphology 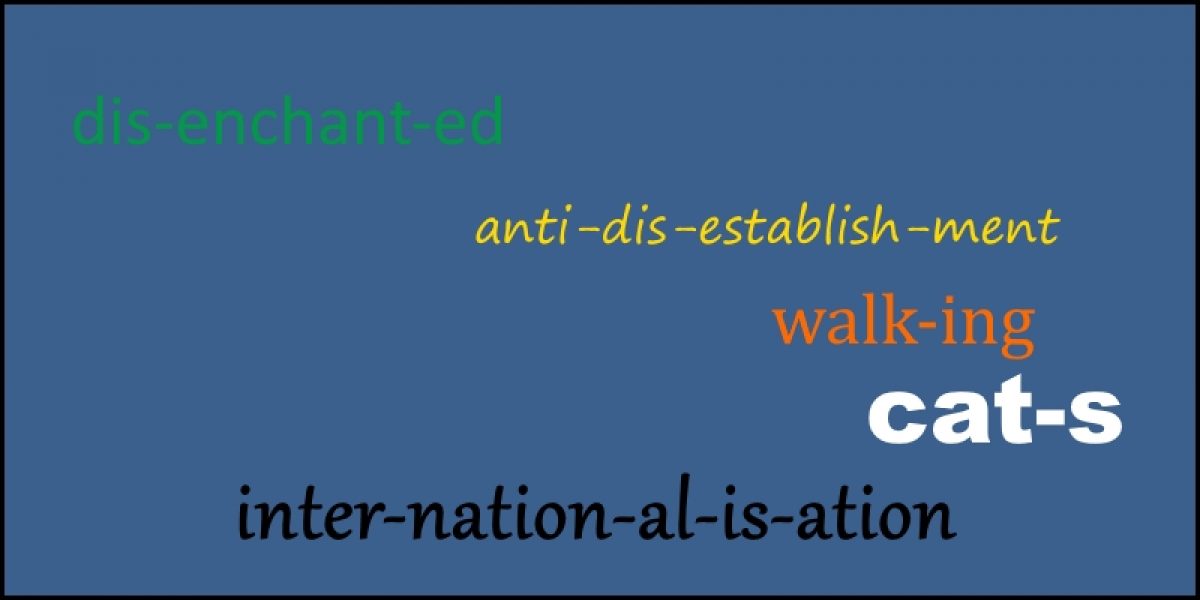 Morphology is the study of word formation in a particular language. It focuses especially on the internal structure of the words and their alteration through the addition of prefixes and suffixes.

We have noted elsewhere (Language) that language is a set of symbols used to transmit meaning. But just what is the smallest element of meaning in a language? Most people tend to think of a word as being the smallest element. Is this the case? Well, consider the following words.

If you were to look up these words in a dictionary you would not find them listed as eight separate words. You would find only four listings of the words in the first column, i.e. dog, walk, sad and run. The words in the second column would be shown within each listing as a variation of the listed word. For example, the word dog is used to mean a domesticated animal belonging to the same family as the fox, wolf and jackal. The word dogs would then be shown as the plural of dog, i.e. meaning more than one. Grammatically, then, words can be divided into smaller elements. In the example just discussed, one such element is dog and the other element is –s, which can be added to dog to make it plural. These smaller elements are known as morphemes. Other examples of the morpheme –s being added to other morphemes to make them plural include:

In the earlier example of walk and walked, the morpheme –ed is used here to indicate the past tense, i.e. that something happened before the present time. Other examples include:

The final example of run and running indicates how the morpheme –ing has been added to the morpheme run to denote an ongoing action. Further examples are:

You may have noticed that, in some instances, when a morpheme is added to another morpheme the spelling of the morpheme which has been added to changes. This is true of run to running (where an extra n is inserted), sit to sitting (where an extra t is inserted). In the case of smile to smiling, the e of smile is omitted, and with funny to funnily, the y of funny is replaced with an i. These structural changes in the way we write the word do not alter the meaning that is produced by the combination of the morphemes.

So far, all the cited examples have involved adding morphemes to the ends of other morphemes. Morphemes in this position are known as suffixes. Morphemes could, of course, be added to the front of other morphemes, in which case they are known as prefixes. Examples of this are re– as in re-print and re-do, pre– as in pre-ordain and pre-pay, and dis– as in dis-allow and dis-agree. It is also possible to alter the meaning of morphemes by the combined use of both prefixes and suffixes. Consider how the morpheme organize can be altered:

It should be apparent from the above discussion that some morphemes can occur alone and still convey meaning. Examples of such so-called free morphemes are go, stop, sit, bus, like and organize (as in the above example). Some types of morpheme, however, cannot occur on their own, e.g. –ly, –ing, –ed, –er, –s, –dis, –re. These morphemes must always be bound to another morpheme if they are to be meaningful. Consequently, these morphemes are said to be bound morphemes.

Notice from the above example of how organize may be altered that organize is the central morpheme. It is this so-called root morpheme which is altered by the addition of the affixes re-, dis– and pre– (prefixes) and –ed, –er, –ation, -ing and –s (suffixes). For most English words the root is usually a word in its own right and it is typically a free morpheme.

There are, however, examples of root morphemes that are not free. An example of such a bound root occurs in the word unconscionable, where un– can be related to the un– of un-relate, un-justified, un-lawful and so on. However, conscionable cannot occur on its own, it always appears bound to the prefix un-. Another example is the word dissuade. Here, the prefix dis– can be related to the dis– of dis-agree, dis-appear and dis-like but suade cannot appear on its own.