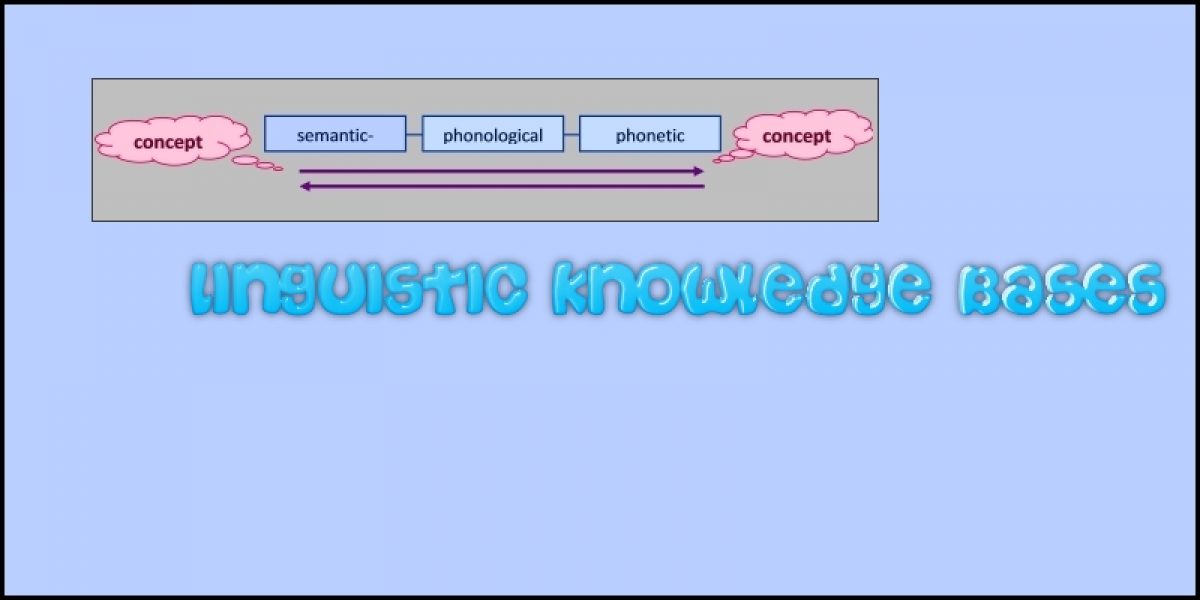 The encode-decode model of communication proposes that:

There are many problems with the encode-decode model but these are not our concern here. Whilst the model has several weaknesses, it is useful as a starting point for considering what processes are involved in human communication.

According to the model, in order for humans to encode thoughts, transmit them and also decode thoughts transmitted linguistically by others, we require knowledge of the rules that are accessed by the relevant encoding or decoding algorithms. Much of this knowledge is unconscious. We are not at all aware how we construct certain utterances – it all seems quite natural. Some aspects of our overall knowledge base, however, can be brought to conscious attention. For example, when I make a deliberate attempt to impersonate someone, I consciously alter the articulation of certain speech sounds that I perceive to be characteristic of the target person.

So, how is this knowledge organized?

The overall knowledge base may be considered as subdivided into three components:

Each component consists of sets of elements and sets of rules for manipulating the elements (Figure 1). 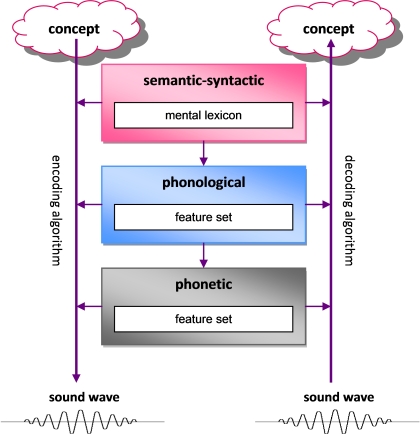 Within the semantic-syntactic knowledge base the element is the mental lexicon. The lexicon is essentially a dictionary that stores the entire stock of words known to the speaker-listener. Words within the lexicon are stored, amongst other methods, according to the conceptual meaning they convey, together with information about their grammatical role (e.g. whether or not they can function as a noun or a verb; whether or not they can operate as the Subject or Object of an utterance). Rules within the semantic-syntactic knowledge base constrain the ordering of, and relationship between, the words and other structural elements in phrases and clauses.

The phonological knowledge base contains a so-called feature set of phonological elements and sets of rules for manipulating these. Examples of the sorts of constraints these rules impose include:

Analogous to the mental lexicon, the phonological knowledge base contains information about which speech sounds are operative in the particular language being spoken. For instance, in the particular variety of English that I speak I use a so-called plosive sound /k/ at the end of the word loch (meaning lake or tarn). So, for me, the two words loch and lock sound the same when I speak them, i.e. they are homophones. For some speakers of English, however, the final sound in loch is not a short, hard plosive sound but a longer, softer so-called fricative sound: as may occur in some Scottish accents. My phonological knowledge base (my phonology), therefore, excludes this particular speech sound from my repertoire – it is not a choice that is typically available to me. In sum, phonological knowledge operates at the level of sound systems – it is sensitive to the context in which speech sounds occur, e.g. whether or not a sound is preceded by a vowel or a consonant, whether or not a preceding sound is a plosive, and so on.

The phonetic knowledge base, like the phonological knowledge base, contains a feature set of phonetic elements and rules for manipulating these elements (see phonetics). Now, whereas the phonological knowledge base operates at the level of sound systems, phonetic knowledge arguably operates only at the level of the sounds themselves. Phones (speech sounds considered as physical events without regard to their place in the sound system) are executed through neural firing sequences that produce coordinated movements of the muscles responsible for speech production. This includes the muscles governing breathing, movement of the vocal folds within the larynx, the tongue, the jaw, the lips, and so on. It is evident that speakers are able to consciously manipulate the various physical constraints when producing connected speech. For example, impersonators entertain us by capturing many different phonetic features of a target speaker: some individual phonetic features appearing to be more important for a successful voice imitation than others (Zetterholm, 2002). Consequently, “if cognitive control of physical constraints is possible, the nature of those constraints must be known to the system” (Tatham, 1989).

However, just because particular knowledge bases are logically prior to others, one must be careful not to assume that they are, therefore, temporally or procedurally prior. The brain is not structured into discrete components that function in an invariable step-by-step, A-B-C, 1-2-3, fashion. Rather, the representation of knowledge is distributed throughout the brain and many interconnections hook up the knowledge bases (see The Modular Mind). The brain does not perform serial, one-by-one, computations like most of our modern computers. Instead, it computes in parallel, performing many millions of calculations all at the same time.

Lengthening Utterances with 'And'
Morphology
The Semantic Problem