You are here: Home > Language > Lengthening Utterances with ‘And’

Lengthening Utterances with ‘And’ 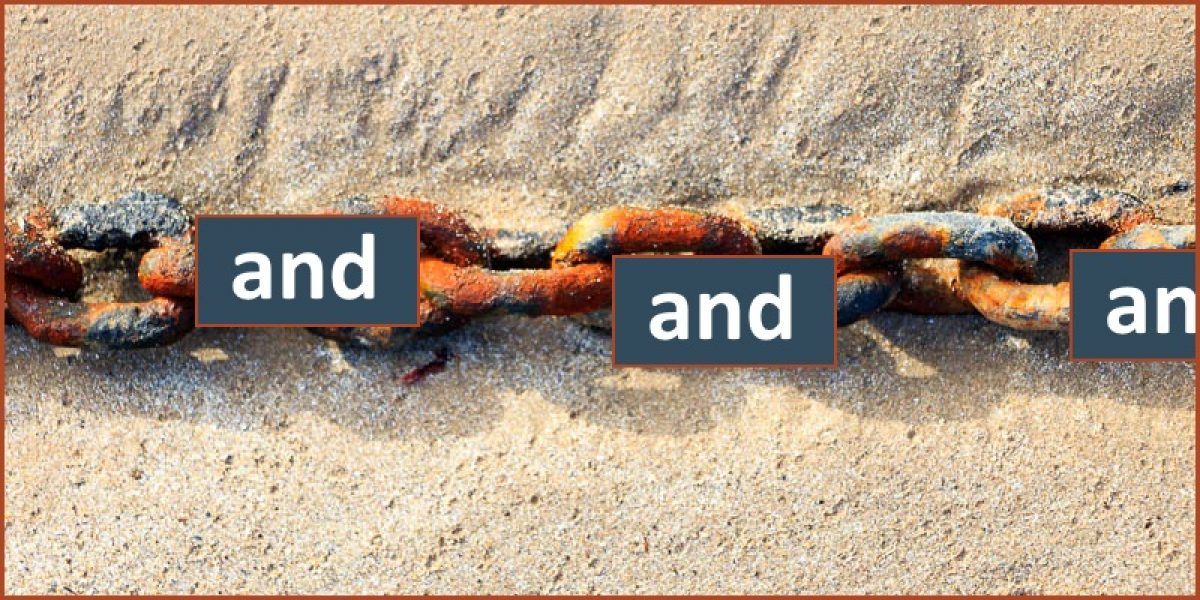 Consider the following brief encounter between Kate (an adult) and a child.

child:    we saw donkeys and we ate ice-cream and we played on sand and we…

Perhaps Kate regretted asking the question? The child’s answer is a seemingly interminable chain of events: an answer to test anyone’s patience. However, this example illustrates admirably how and is used to connect one utterance with another. Indeed, the use of the conjunction and as a connector is one of the most pervasive ways children extend their utterances beyond the Two and Three Word Stages.

The use of this short word is not as simple as it might first appear to be, however. Children use it creatively for a variety of reasons and we will consider four of these functions: (1) additive, (2) temporal, (3) causal, and (4) adversative (Bloom, L. (ed) (1993) Language Development from Two to Three Cambridge: Cambridge University Press).

Consider again the child’s response in the previous example.

You will note that each utterance which precedes an and is meaningful by itself. For example, we saw donkeys is understandable even if it is uttered on its own. Likewise, this is true of we ate ice-cream and the utterance we played on sand. In other words, the combination created by chaining the utterances together with and does not produce a meaning that is anything other than the meaning of each independent utterance. This use of and to add independent utterances is referred to as the additive function. This usage may be construed as meaning the same as also, i.e.

It is generally accepted that children develop this use of and at around 25-27 months of age. However, that there is wide variation amongst children when developing linguistic skills. This is true of the acquisition of and, with some children using it earlier than 25 months and others not using it until considerably later than 27 months. However, one constant appears to be that, regardless of the age at which the word is acquired, children almost invariably use it first in its additive function. Further examples of this function include the following.

I write and I paint

she is strong and she is tall

mummy is nice and mummy is happy

This function is sometimes referred to as pure addition. It is, however, not the only function that and assumes. From 26-32 months of age children begin to introduce concepts of time into their utterances and to use and in its temporal function.

There are a number of ways children can express time. One of the most obvious is to use temporal markers such as after, Monday, today, now and so on. For example:

I swim after dinner

we go on Monday

Alongside this development children also begin to use and to mark such things as sequential events. Consider the following utterance.

I went to the shop and I came back

It may be assumed that and is displaying just the additive function here. After all, I went to the shop and I came back are both capable of standing alone as understandable utterances. However, the combination utterance is more than an example of addition because its two constituent utterances are, in some way, dependent upon each other. The action of the second utterance, ‘coming back’, is dependent on the first action, ‘going to the shop’. Thus, there is a sequential order to the combination utterance. First the child goes to the shop and then he or she comes back. It is self evident that the child does not first come back and then go to the shop. In this context, we can see that and is used to mark a temporal function that is similar in meaning to subsequently, i.e.

I went to the shop subsequently I came back

Other examples of the temporal use of and include:

I got up and I got washed

daddy read a book and he fell asleep

the horse fell and Kathryn cried

Each of these further examples could be described as additive. However, they also include an element of temporal continuity, i.e. the second action follows on from the first. It is the fact that temporal utterances are usually also additive that explains why children use and in its additive function before they use it in its temporal function. If the temporal utterance involves both an understanding of addition and temporal sequence then it is, clearly, more complex than an utterance that requires only an understanding of addition. The last example above, the horse fell and Kathryn cried, is interesting because, as well as marking a sequential order to the events, i.e. Kathryn cried after the horse fell, there is a sense in which it was the horse falling which caused Kathryn to cry. Consequently, as well as marking a temporal function, the use of and in this utterance also marks a causal function. Children begin to use this function at almost the same time they begin using and in its temporal function, i.e. 27-32 months.

As already mentioned, and can be used to signal that one event caused another event to happen. Its use demonstrates the child’s growing awareness that certain events, or actions, have consequences. Consider the following.

mummy kissed Ryan’s knee and it was better

This utterance demonstrates the child’s awareness that one action, ‘mummy kissing Ryan’s knee’, was the cause of a new state, ‘the knee was better’. The use of and in this context can often be interpreted as meaning therefore or so, i.e.

mummy kissed Ryan’s knee so it was better

Adam kick the ball and the window break

the bee stung and it hurt me

The fourth important use of and is to signal some sort of contrast between the first utterance part and the second. Consider the following example.

Robert is happy and Helen is sad

This utterance contrasts one state, Robert being happy, against another state, Helen being sad. This use of and may be construed as meaning but, i.e.

Robert is happy but Helen is sad

You may have expected from the discussion of the cumulative effect that all examples of the adversative function would include the additive, temporal and causal functions. Well, this is evidently not the case. In the example of Robert is happy and Helen is sad, the combination utterance only relies on adding the two utterance parts. There is no obvious sense in which Helen being sad can be thought of as necessarily following on in time from Robert being happy. Also, it is not apparent how Robert being happy would cause Helen to be sad. In summary, the use of and in this example demonstrates the additive and adversative functions but not the temporal or causal functions. There are, however, examples of the adversative function displaying both the additive and temporal functions, e.g.

I was sick and now I am not sick

This complex utterance embraces all four functions. First, the two utterance parts are added, i.e. the dog chewed the clean carpet is added to now the carpet is dirty. Second, the temporal function is demonstrated by the fact that the carpet being dirty follows on in time from the carpet being clean. Third, the causal function is demonstrated by the child’s understanding that it was the dog chewing the carpet that caused it to become dirty. Finally, there is the contrast of the state of a clean carpet with that of a dirty carpet, which demonstrates the child’s use of the adversative function. So, we see in this one utterance how the one small word and can be used to signal a wealth of meaning.