You are here: Home > Anatomy > Larynx 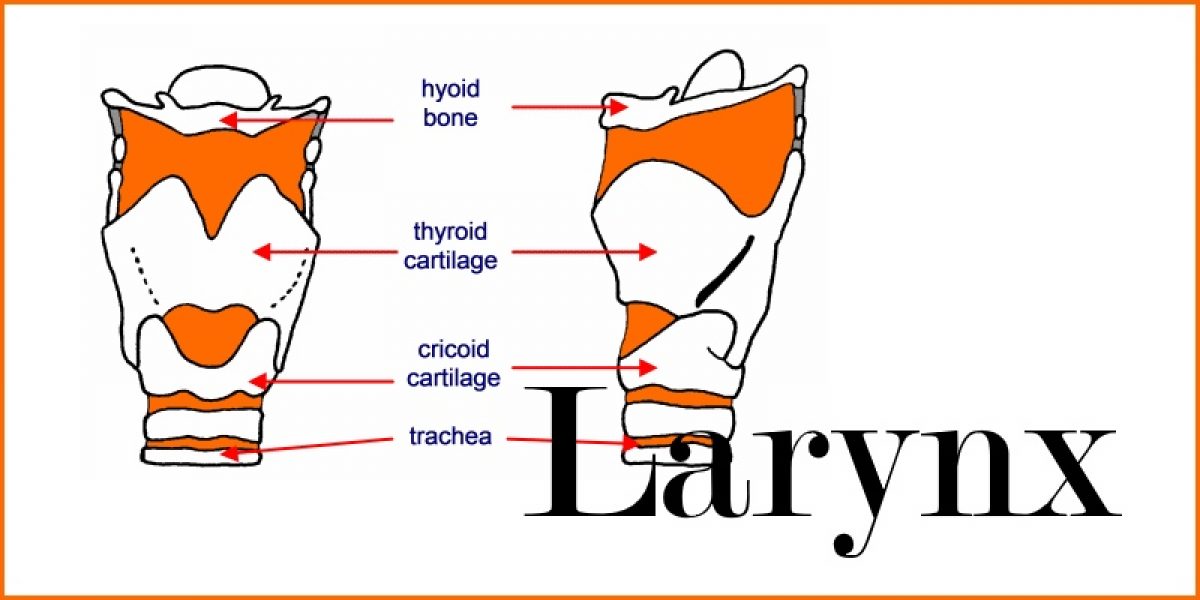 Function of the larynx

The larynx is situated at the upper end of the trachea, connecting the lungs to the vocal tract. It has two main functions:

The larynx is constructed from nine cartilages. For the purpose of this discussion, however, we will restrict ourselves to a consideration of just three of these:

The thyroid cartilage is the largest of the laryngeal cartilages and forms the major chamber of the larynx. It is constructed from two relatively flat quadrilateral (four-sided) plates that are fused anteriorly in the midline along most of their length into a characteristic shield shape. The angle at which the plates join is different in males and females. In males it is about 90o and in females it is nearer 120o. This so-called thyroid angle is, therefore, more acute in men and it is consequently more noticeable as the Adam’s Apple. Posteriorly each plate is extended both upwards and downwards into horns or cornu. The superior horns attach by ligaments to the hyoid bone, situated under the base of the tongue in the neck, and the inferior horns articulate with the cricoid cartilage beneath. 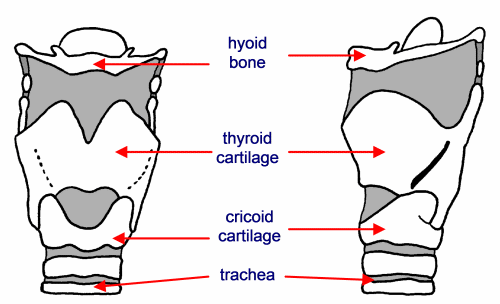 The third major cartilage construction in the larynx is actually a pair of cartilages known as the arytenoid cartilages. These are pyramid-shaped and they are situated on the upper posterior part of the cricoid cartilage. One is placed laterally to the left and one laterally to the right. The arytenoids can be moved in rotational and sliding movements that are used to control the movement of the attached vocal cords.

Two muscles known as thyroarytenoid muscles attach the thyroid cartilage to the arytenoid cartilages. The lower portion of these muscles forms the true vocal cords.

The vocal cords are approximately 17-22 mm long along their upper edge in adult males and about 11-16 mm long in adult females. In cross-section they are almost triangular in shape. Hence, a better term for them – and the one most likely to be used by speech therapists – is vocal folds, as ‘cords’ incorrectly suggests that they are each a long, slender, thin strand. [Sometimes ‘vocal cords’ is written as ‘vocal chords’ – the term vocal folds also, therefore, neatly avoids this confusion.]

As the arytenoids are variously rotated, and slid backwards and forwards, the posterior borders of the vocal folds are either moved apart or moved close together. Air from the lungs passes upwards through the trachea and through the larynx.

It is the vibration of the adducted vocal folds that creates the note on which many English speech sounds are produced. This is the human voice.

Phonation is the term given to the vocalization of the airstream by the vibration of the vocal folds. The resulting sound is said to be phonated (see Voice).

Sometimes known as ventricular folds or vestibular folds, the false vocal folds do not usually play a part in phonation. However, they do close together to form a valve during swallowing. It is also thought that they function to lubricate the true vocal folds. Further, as they contain specialized immune response cells, they appear to play a part in protecting the vocal tract from invasion by infectious organisms (e.g. bacteria, fungi).

If the false vocal folds are pressed together during normal speech this has the effect of obscuring the true vocal folds. The resulting voice can sound harsh and breathy, with a lowered pitch. If this pattern of voice production is used consistently this can lead to a so-called hyperfunctional voice disorder. Specifically, in this case, it is known as plica ventricularis (read more about voice disorders here).