You are here: Home > Communication > Interruption 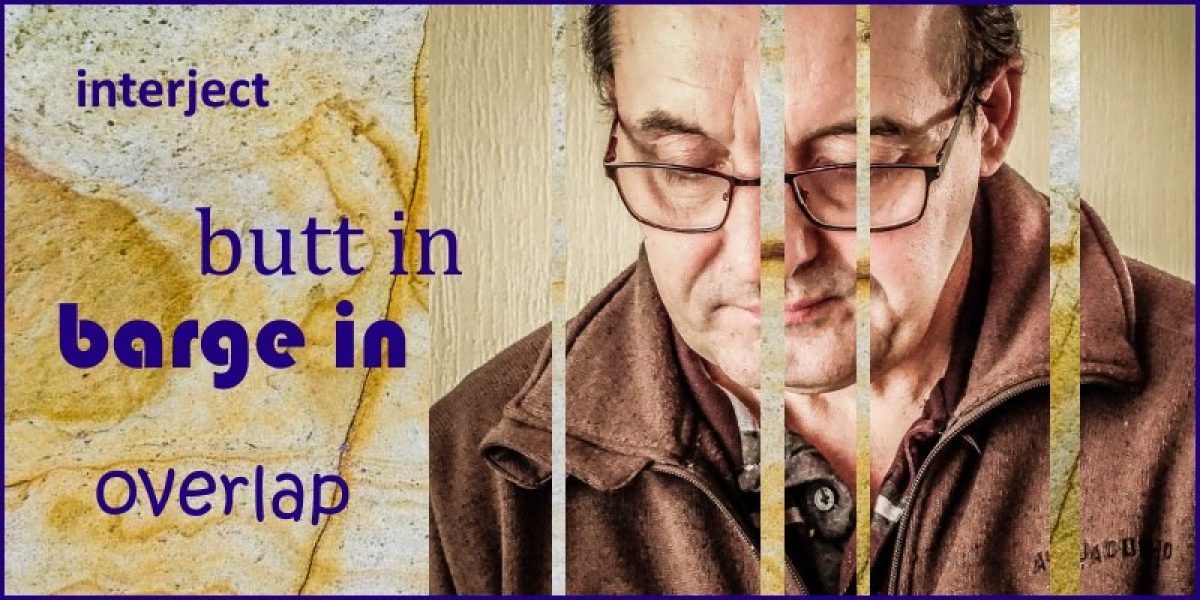 In the transcription extracts shown below, the // symbol is used to mark the point at which the current utterance is overlapped by the utterance transcribed immediately below it. In addition, the symbol (..) represents a brief pause of between about 0.5-1.0 seconds.

In this brief extract it is Baljeet who speaks first in line 1. Notice that her utterance is framed as a tag-question, i.e. she appends the tag didn’t you? to the end of her statement you went there. Now, tag-questions are especially prone to being overlapped because they are often spoken with a slight pause between the main body of the utterance and the tag itself. This is the case with Baljeet’s utterance: she makes a slight pause after you went there prior to appending the tag didn’t you? Consequently, the slight pause after Baljeet’s statement you went there can be seen as signaling a possible place at which the listener can take up a turn at talk (often known as a transition relevance place (TRP)). In fact this is what Abinaash does in line 2, with the confirmation yeah. However, Baljeet evidently did not intend this slight pause to represent a transition place, as she continued by adding the tag didn’t you? Thus, Abinaash’s line 2 utterance yeah overlaps some of Baljeet’s talk. This type of overlapping talk is, however, accidental or inadvertent. In other words, there was no intention on the part of the listener to deliberately interrupt the speaker.

Now consider the following extract of a conversation between three people.

In this example, Judy’s line 2 utterance I don’t think so and Margaret’s line 3 utterance no way he would overlap each other. In order to interpret this, we have to examine what took place before this overlap.

We see that the extract begins in line 1 with Paul’s opening statement he should have gone immediately. Now, this utterance does not specifically select the next speaker. [By way of contrast, if Paul had said should he have gone immediately Judy? this would likely have been interpreted as Paul nominating Judy as the next speaker and it would, therefore, have been relevant that he stop speaking and that Judy should speak next.] Inasmuch as the next speaker is not selected by Paul, then either of the other two conversational participants can self-select as the next speaker. Now, it is apparent from the extract that both Judy and Margaret attempt to self-select as the next speaker. What has happened in this instance, however, is that they have both spoken at the same time. Consequently, their utterances overlap (lines 2 and 3). Again, this does not appear to be a deliberate attempt to interrupt Paul: the overlap was simply a case of two speakers both starting their talk at the same time.

We can contrast the above examples of inadvertent, or unintended, overlap with the following example which appears to demonstrate a deliberate interruption.

First examine where Sarah’s utterance (you don’t know anything about this (.) maybe he wanted to set it up like that in lines 2-3) commences. It can be seen to begin on the third syllable of the word intentionally currently being spoken by Nadir in line 1. It should be self-evident that the middle of a word is not an appropriate place at which another conversational partner can legitimately take up a turn at talk. Consequently, Sarah’s talk is perceived as a violation of the assumed rules of turn allocation. Her talk is, therefore, perceived as a deliberate interruption and not an inadvertent overlap, i.e. it is a violative interruption.

Inadvertent overlaps typically occur at potential transition places, i.e. those junctures at which the turn at talk could legitimately pass from one speaker to another. They often occur because one or more of the conversational participants perceives an upcoming transition place where the speaker may not have intended there to be one. Alternatively, they may occur because more than one person attempts to self-select as the next speaker at an appropriate transition place, both speaking at the same time and, therefore, overlapping. In contrast, violative interruption can be seen as a transgression of this scheme, i.e. they typically occur where there is no viable transition place.