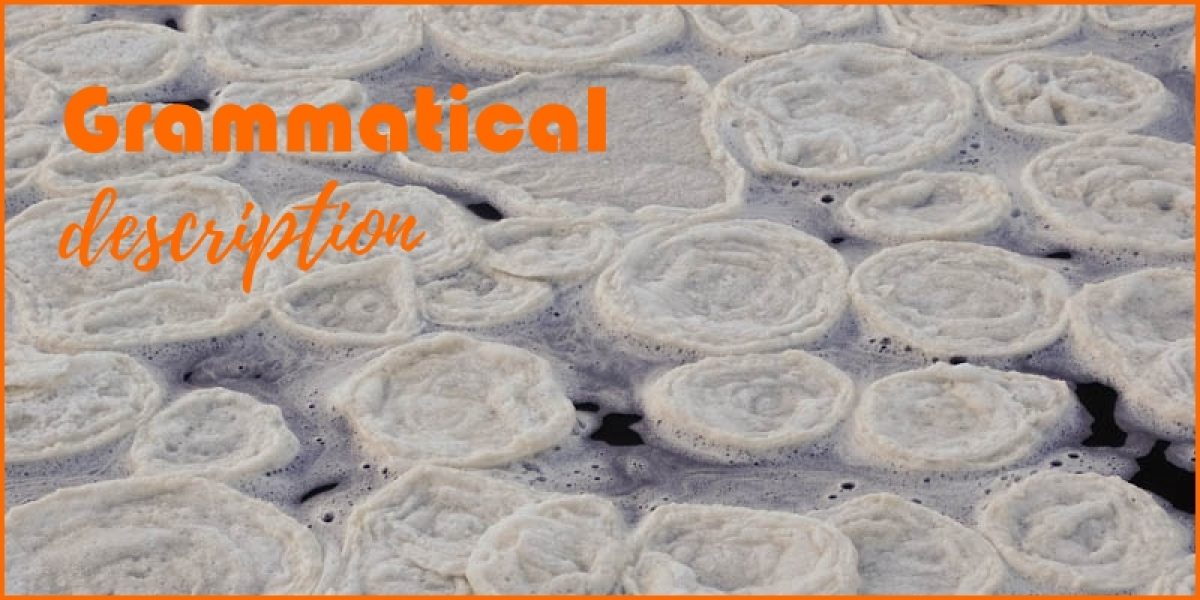 This type of description attempts to simply describe the language people use, without making judgements about its correctness. Traditional, structural grammars that attempt to describe language in terms of parts of speech, such as the word classes of verbs, nouns, adverbs, and so on, fall into this category. Similarly, so-called functional grammars that focus on how words combine to make meanings, and how they fulfil different functions within an utterance, are also defined as descriptive grammars.

These sorts of description exist to tell people how they should speak in any particular context, rather than how they do speak in reality. Unlike descriptive grammars, prescriptive grammars do entertain notions of correctness. For example, they would typically prescribe that the plural and singular forms of the so-called 2nd person pronoun (you) are the same, e.g. I give it to you (singular), I’d like to thank you all for coming today (plural). However, in the Tees Valley area of the UK where I live, it is not uncommon for this pronoun to have an –s appended to it: rather like one would add an –s to cat to change it into the plural form of cats. This leads to utterances such as I’d like to thank yous all for coming today. This would be criticised by a prescriptive grammarian on the grounds that it incorrectly over generalises the rule for creating plurals. A descriptive grammarian, however, would simply record this instance as an example of 2nd person plural pronoun use in the Tees Valley: he or she would be unconcerned about notions of correctness.

These grammars are generally used to teach a language to non-native speakers of that language. They subscribe in part to a prescriptive grammar in that they assume some sort of definition of a so-called Standard English (or Standard German, Standard French, Standard Welsh, and so on). However, practitioners also tend to use a lot of real world, contextualised practice examples when teaching the grammar. As such, they make use of aspects of both descriptive and prescriptive grammars.

For example, school authorities often prescribe how children and young people should say things in certain situations. This is often driven by the belief that if school-leavers are to function successfully in the world of work they need to be able to communicate in standard ways. It is claimed that these so-called right ways of speaking are necessary if they are to be understood and to be effective workers. Interestingly, these prescriptions of how people ought to speak are typically framed in relation to a written grammar. That is to say, there appears to be an assumption that we should speak in the same way that we should write. The written language appears to be taken as the benchmark that defines the proper way of speaking. However, research from the latter part of the twentieth century onwards, using large collections of audio-recorded data of people speaking in both formal and informal contexts, has revealed a remarkably sophisticated grammar of spoken language that differs from the grammar of written language (Carter, 2004).

As speech therapists are concerned with enabling people with communication difficulties to function optimally within their environment(s), they do not typically adopt a prescriptive grammar. This can, however, lead to tensions between school authorities and health services. Teachers may be under a contractual obligation to teach a prescriptive grammar according to a declared curriculum, whereas speech therapists typically seek the best means of enabling clients to communicate – whether these accord with a school’s prescription or not. A simple example from the UK relates to how to teach a child to say the speech sound that appears at the start of words such as think, three and thin. According to Standard British English, this should be the voiceless dental fricative /θ/ (see Consonants for an explanation). However, in the East End of London this speech sound is commonly realized with the voiceless labio-dental fricative /f/, i.e. fink, free and fin. Arguably, therefore, the /f/ is the standard for the East End. What then should the speech therapist do? Which is the right standard to adopt? As speech therapists are attempting to fit people to their environment(s) it seems more likely to me that, in order to avoid such things as social stigma or even bullying, that the so-called non-standard /f/ would be taught.

Generally, therefore, speech therapists do not concern themselves with purely prescriptive grammars. They are concerned with describing exactly how a person speaks and uses language and whether or not this leads to effective communication. In reality, however, because speech therapists intervene – either through direct or indirect teaching methods – to help clients alter their patterns of communication, aspects of pedagogic grammars are frequently incorporated.

Hewings, A. (2005) Describing the Grammar of Speech and Writing Milton Keynes: The Open University.