You are here: Home > Grammar > Grammar and the Speaker

Grammar and the Speaker 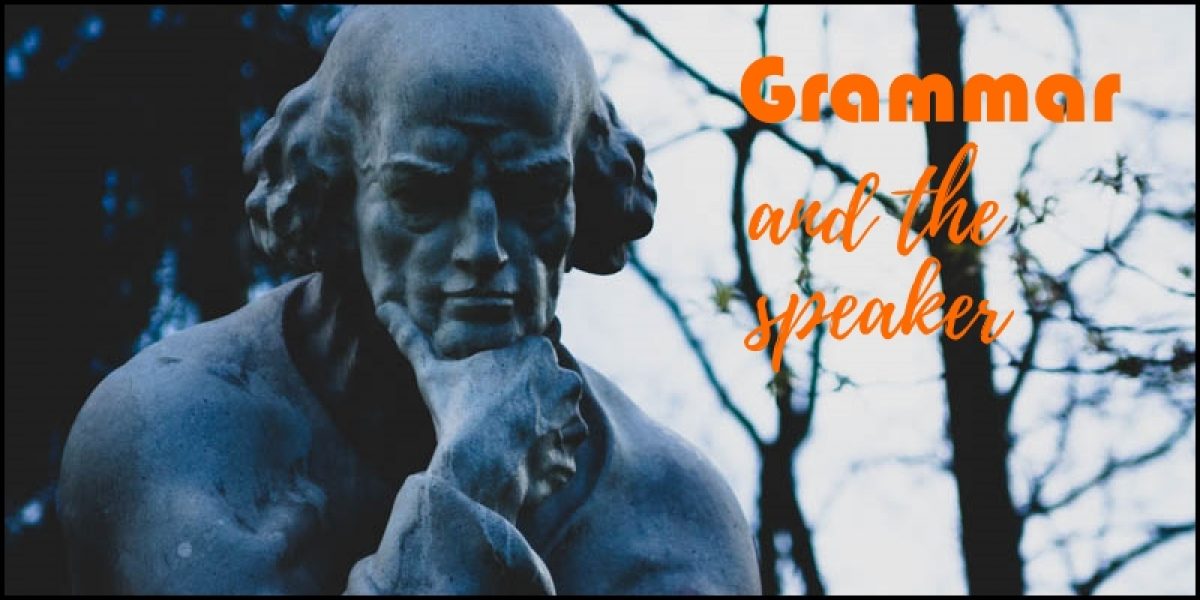 If you were asked what the meaningful units of language were called you would probably say ‘words’. Look at the words in the following utterances:

Do the words mean the same thing in each utterance? Do the two utterances mean the same thing? Obviously the answer to the first question is ‘yes’ and the second ‘no’. It follows then that the order in which the words occur has a bearing on the meaning of an utterance. The fact that we can interpret the two utterances correctly shows that we know something about word order which allows us to access that meaning. Knowing a language means more than knowing the words of a language; we need also to know how to put words together in a way which is both predictable and meaningful. The rules which govern how elements of language are put together are known as the grammar of the language. Although this definition appears straightforward the term is used with a range of related but distinct meanings (see Grammatical Description). For example, traditional grammar and prescriptive grammar are principally concerned with supporting a particular (Standard) variety of the language, whereas descriptive grammar tries to view language objectively and to explain all its forms and often the judgements of native speakers too.

There are actually two distinct kinds of grammatical knowledge.

In addition to our implicit knowledge, we may also have explicit knowledge. If so, then when we hear an ungrammatical utterance we are able to describe the ‘errors’ and state which rules have been broken, probably with the use of technical terminology.

The first kind of knowledge (implicit) is acquired in the natural process of learning to speak; the second kind (explicit) implies explicit teaching.

Which of the following utterances do you consider to be ‘correct’? Explain your reasons; how much grammatical terminology do you need to use?

You may be able to explain your judgement by checking what the utterance sounds like without the ‘extra’ word.

NB: Conventionally, ungrammatical items are marked with a star (asterisk) *.

It is now immediately obvious that the starred utterances are not ‘grammatical’.

Notice that word is a technical term which helps you talk about language (all such terminology is known as metalanguage). You don’t need to know the word word in order to speak and your use of it would be evidence of some explicit language knowledge. If you knew that the extra word was called a noun or that pronouns functioning as objects then your explicit knowledge is all the greater.

Many definitions of the term ‘grammar’ refer to written descriptions of language patterns. However, the term can also be applied to those structures within the mind of a speaker which allow the formation and recognition of acceptable utterances. Some forms of descriptive grammar have the description of these psychological rules as their goal and the term ‘grammar’ is often used ambiguously to refer to both the rules in the speaker’s mind and the same rules written down. There is plenty of evidence that these psychological grammars are real; how else can the consistency of language forms be explained? It also seems to be the case that our personal grammars are far more complex than any ‘explicit’ grammar yet written. Every speaker has to learn the forms of their native language anew and one consequence of this is that the grammars of no two speakers will be exactly alike. We each have a personal grammar.

When you have done this activity for yourself, ask a friend to do it and share your conclusions – do you agree in every case?

The list includes some utterances which most speakers of English would be happy with. One utterance is definitely grammatical but makes no sense (2), while one clearly does not follow the basic rules of utterance structure (9). At least one follows a pattern used in many non-Standard varieties and so is grammatical within that variety (7). Others you might feel are condemned by prescriptive grammar even though you feel comfortable saying them (6?, 10?, 11?). Remember in such cases that usage changes over time and that even if you remember rules about ‘who’ and ‘whom’ and about prepositions at the end of utterances, the fact that almost everybody says Who is it from? is an important consideration.

You probably found that if you did this activity with a friend, even if you feel you speak the same variety of English, you did not agree on every point. This illustrates the fact that we all develop our own individual form of English (and explains why so many disputes arise over ‘correctness’.

All speakers possess their own grammar and employ grammatical rules automatically.

For every utterance which you know implicitly to be grammatical there is an underlying linguistic structure which is susceptible to analysis and description.

This article is adapted from ‘Grammar: the rules of language’ in Primary English by Ian Eyres which is taken from ‘Knowledge in everyday life’. An OpenLearn (http://www.open.edu/openlearn/) chunk reworked by permission of The Open University copyright © 2016 – made available under the terms of the Creative Commons Licence v4.0 http://creativecommons.org/licenses/by-nc-sa/4.0/deed.en_GB. As such, it is also made available under the same licence agreement.