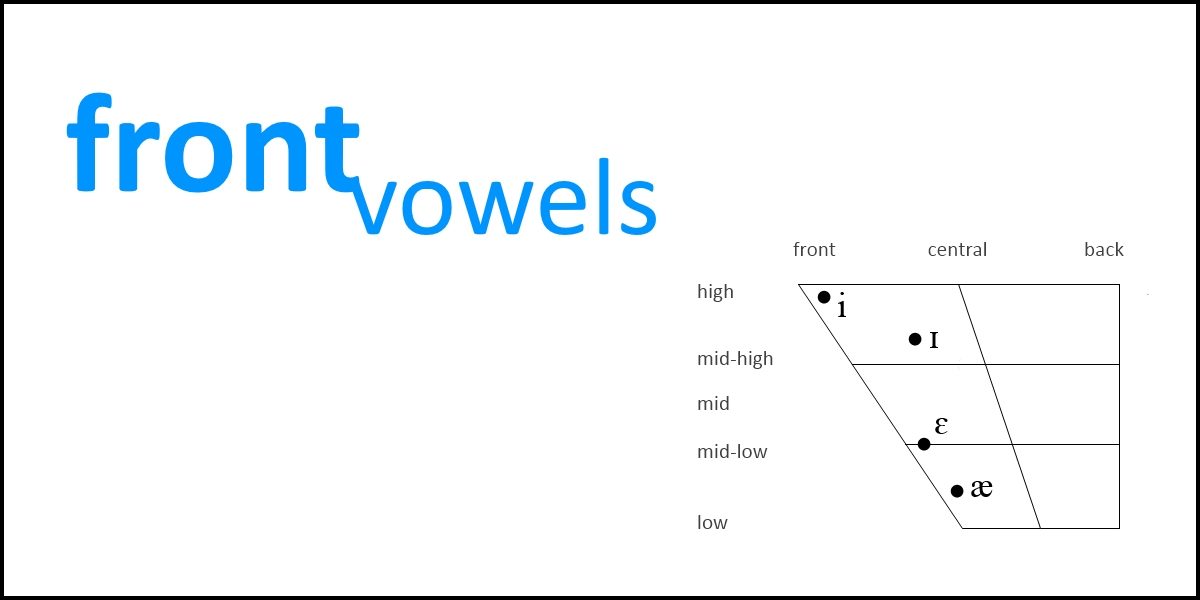 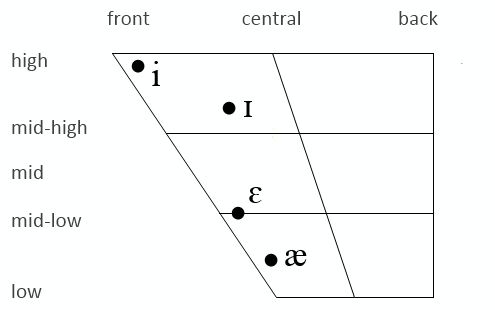 Front vowels are produced with the front part of the tongue raised towards the hard palate. There are four front vowels and they are largely the same for speakers of both American and British English.

From the chart in Figure 8, it is apparent that the font vowels are distributed in the vowel space almost equidistantly along the vertical tongue height axis (from high to low). They are all made with unrounded lips.

The vowel /i/ (as in the word heed) is the vowel made with the highest tongue elevation – it is the close vowel. Since it is made with tongue elevation at the front of the mouth, and is unrounded, it can be labeled simply as the HIGH FRONT UNROUNDED vowel. It is a long vowel and so it may also be transcribed as /iː/.

The second vowel /ɪ/ (as in the word hid) is made with the tongue lowered slightly in the mouth, but not quite to the mid position: it is nearer the mid-high position. It is, therefore, a mid-high vowel. In addition, the vowel is made slightly further towards the central part of the mouth. Having said this, it is fairly close to the front and, as such, it can be referred to as a fairly-front vowel. This lowered and centralized unrounded vowel can, therefore, be described as the mid-high, fairly-front unrounded vowel. Or, given that the dimensions in the idealized vowel space are not intended to be represented with great precision, we can simplify the description and label it as the MID-HIGH FRONT UNROUNDED vowel. It is a short vowel.

The third vowel is /ɛ/ (as in head). This is the MID-LOW FRONT UNROUNDED vowel. It is also a short vowel.

The fourth, and final, vowel is /æ/ (as in had). Whilst it is not quite fully open, being articulated in an intermediate position between low and mid-low, it does have the lowest tongue elevation of all the front vowels. Consequently, we can refer to it as LOW FRONT UNROUNDED vowel. Like /ɪ/ and /ɛ/, the low front unrounded vowel is also short.