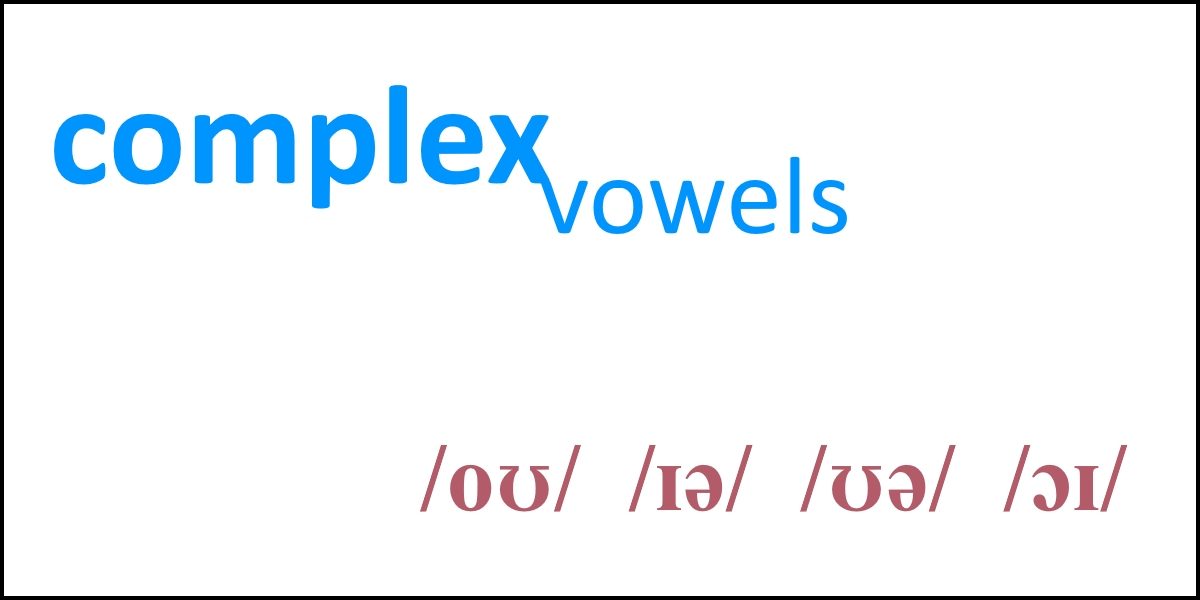 Simple vowels do not change the configuration of the oral cavity whilst the vowel is being produced. There are, however, some vowels that do entail changes to the configuration of the oral cavity during their production. These are known as complex vowels. An example is /ɔɪ/ as in boy. Try saying this aloud whilst looking in a mirror. You should notice that your mouth shape changes as you produce the vowel, demonstrating the dynamic reconfigurations that typify complex vowels.

Complex vowels which involve two broad configurations of the mouth during their production (a starting configuration and an ending configuration) are known as diphthongs. These can be thought of as being created through the combination of two simple vowels. Beginning with the articulation of one simple vowel the articulation is then altered such that it moves smoothly towards the production of a second simple vowel. The first part of the diphthong is typically more prominent than the final, brief second part. This second part – the second simple vowel in the combination – is usually restricted to a choice of:

Consequently, we can subdivide diphthongs according to which second simple vowel occurs in the combination.

The formation of the /ɪ/-diphthongs is represented diagrammatically in Figure 13. 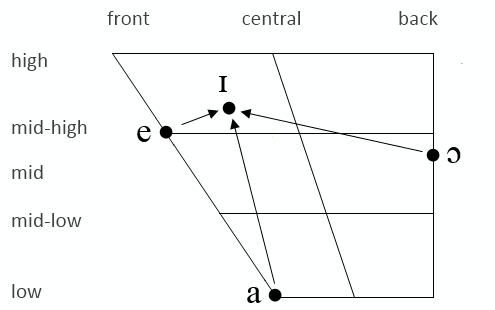 There are three diphthongs that move towards the front simple vowel /ɪ/. The same three vowels are used by speakers of General American (GA) and Standard Southern British English (SSBE).

The first begins with a vowel that is made slightly higher in the mouth than the mid-low front unrounded vowel /ɛ/ and it is transcribed as /e/. It is made in with the tongue elevated to the mid-high front position and it is, like all front vowels, unrounded. The resultant diphthong is, therefore, /eɪ/. This is the sound that occurs in the word hay.

The second diphthong begins with a vowel that is made with slightly lower tongue elevation than the low front unrounded vowel /æ/ and, hence, with a slightly more open mouth. It is represented by the symbol /a/. It is articulated in the low front position and it is, as might be expected, unrounded. The resultant diphthong is /aɪ/, as in the word high.

The final /ɪ/ diphthong starts with a vowel that is formed in approximately the same position as the mid back rounded vowel /ɔ/. The follow-on diphthong is, therefore, represented as /ɔɪ/, as in the word boy.

Figure 14 shows the two diphthongs closing in /ʊ/ that are typically used by speakers of General American. 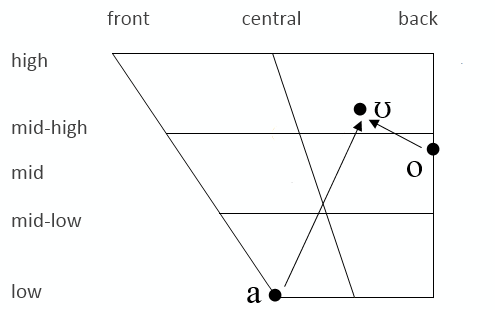 The first is /oʊ/ and represents the vowel as it appears in General American pronunciations of the words hoe, dough and code. As Ladefoged and Johnson (2011:41) note, “For most American English speakers, the first element is very similar to sounds that are written in Spanish or Italian with the letter o.” This first element of the diphthong, i.e. /o/, is formed in a similar position to the mid back rounded vowel /ɔ/. It then glides smoothly towards the mid-high back rounded /ʊ/.

The second begins with the vowel that is made slightly lower in the mouth than the low front unrounded vowel /æ/ and represented as /a/. This combination forms /aʊ/, as in the word now. This /aʊ/ diphthong is also used by speakers of SSBE (see Figure 15). 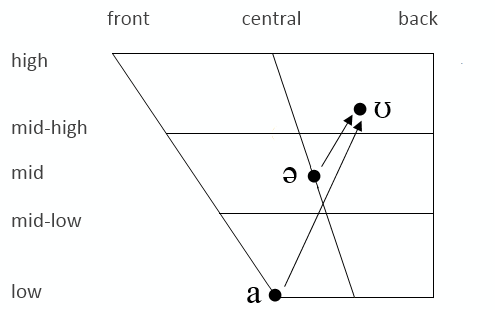 We see from Figure 15 that, unlike speakers of General American, speakers of Standard Southern British English do not usually use the /oʊ/ vowel for hoe, dough and code. Rather, they use a diphthong that begins more centrally with the mid central unrounded schwa, which then glides smoothly to close with a vowel very close to the mid-high back rounded /ʊ/.

There are three further English diphthongs that we will illustrate. They all close with the schwa vowel and they are only realized in SSBE, i.e. they do not appear in General American English. The vowels are represented in Figure 16. 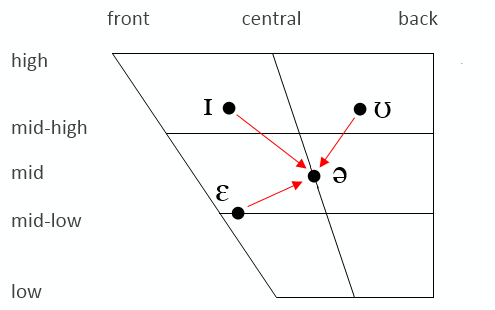 Since each initial simple vowel in the two-vowel combination moves towards the central vowel /ə/, these diphthongs are commonly referred to as centering diphthongs.

The first of these is the vowel /ɪə/ as it appears in British pronunciations of the word near. From the IPA symbol used to represent this vowel, it can be seen that the vowel begins with an articulation of the mid-high front unrounded vowel /ɪ/ followed by a smooth transition towards the vowel /ə/.

The second diphthong begins with the mid-low front unrounded vowel /ɛ/ before moving towards /ə/. The diphthong created by this rapid and smooth movement is, therefore, transcribed as /ɛə/. This is the vowel sound that occurs in the word square.

The third, and final, diphthong in this group begins with the mid-high back rounded vowel /ʊ/. The resultant diphthong is transcribed as /ʊə/. It occurs in British pronunciations of cure.

NEXT>> Summary of Complex Vowels