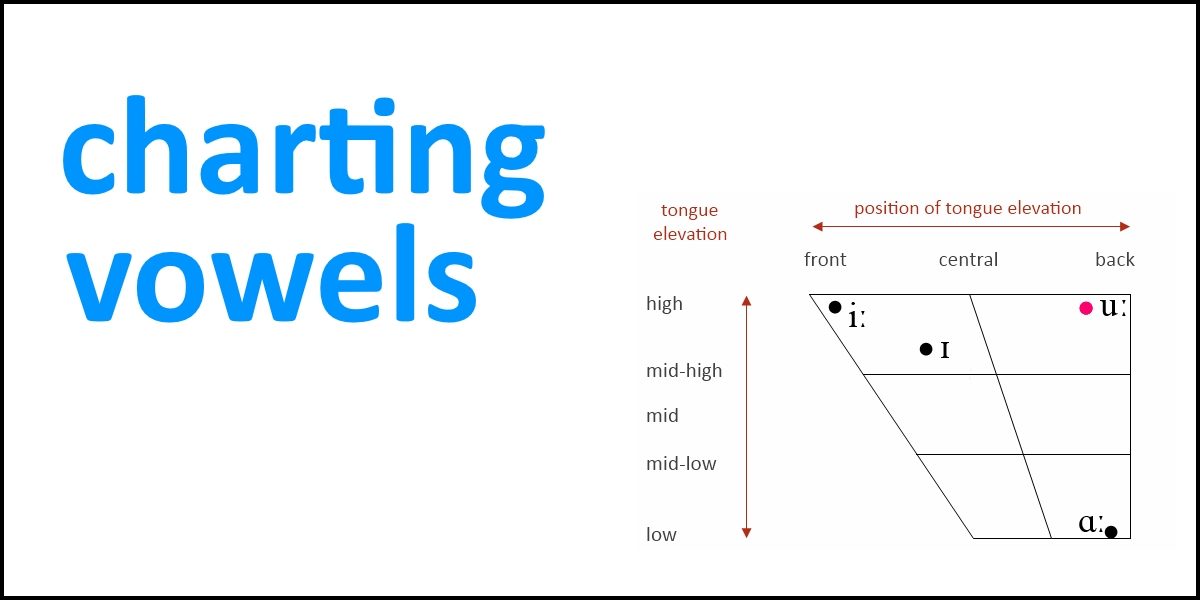 We now have all the information we need to begin charting vowel sounds (see Parameters for Describing Vowels) to better understand how they are formed. If we represent the oral cavity diagrammatically as a quadrilateral, we can begin to plot the position of vowels in the so-called vowel space. Figure 6 shows an example of how the four vowels /iː/, /ɪ/, /uː/ and /ɑː/ can be plotted on such a diagram. 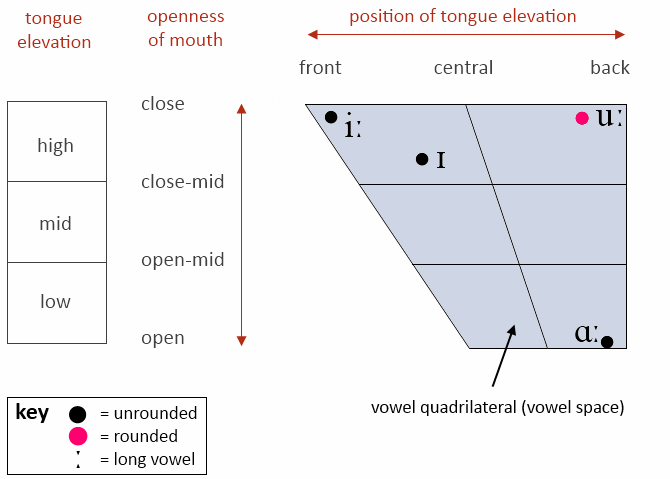 The top line of the Figure 6 quadrilateral, along the /iː/ – /uː/ axis, is longer than the bottom axis. It extends further forwards than the bottom axis because, anatomically, there is more space towards the roof of the mouth than the floor. If the tongue is raised higher than the top axis this narrows the gap between the tongue and palate to such an extent that the outgoing airflow becomes turbulent and friction is created, i.e. a fricative consonant is produced (see Fricatives). Similarly, if the tongue is lowered (or backed) below the position of the /ɑː/ vowel, friction is also created. The sloping left edge of the quadrilateral corresponds to the palatal area of the oral cavity and the straight right edge corresponds to the velar area. Consequently, the left edge represents front vowels and the right edge represents back vowels. Finally, the vowel quadrilateral is typically divided into six areas by a sloping central axis that cuts through the close, close-mid, open-mid and open axes. As we will see, these divisions provide a useful means of describing vowels.

When charting vowels, it is common to use only three parameters:

We do not need to be explicit about openness of the mouth because, as we have seen, it correlates with tongue elevation. It would, therefore, be redundant on any chart. Since a so-called vowel chart is concerned with plotting the relative positions of where vowels are made in the mouth, it is also not necessary to explicitly indicate the length of vocalization. One way of displaying a vowel chart, therefore, is as set out in Figure 7. The chart uses the quadrilateral to represent, in stylized form, the shape of the mouth based on a vertical axis of height of tongue elevation and a horizontal axis of the position of the tongue elevation. Note that the openness axes (close, close-mid, open-mid, open) have been relabeled with their corresponding tongue elevation labels: high, mid-high, mid-low and low. 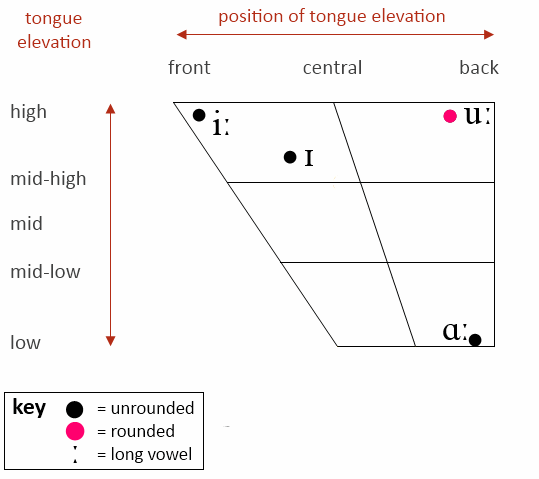 Note that, for ease of reading charts of IPA symbols (IPA, 1999), the slanting lines around the symbols have been omitted. We have adopted this practice for all Figures and Tables in this series of articles (English Speech Sounds 101), unless their omission would lead to confusion. Similarly, to avoid confusion by over-coloring the diagrams, from here on lip shape will no longer be indicated by colored dots (● or ●) but will be noted in the written label/description of each vowel, i.e. ‘round’ or ‘unrounded’. Finally, we will not be charting vowel length using the colon symbol (ː). In this way, we hope to simplify the representation of vowels.

In summary, the different quality of vowel sounds can be adequately described by the openness of the mouth, the position of the tongue elevation, and the shape of the lips. These three parameters may be used to chart all English vowels.

Age of Acquisition of Speech Sounds
What is a speech sound?
Comparing Accents