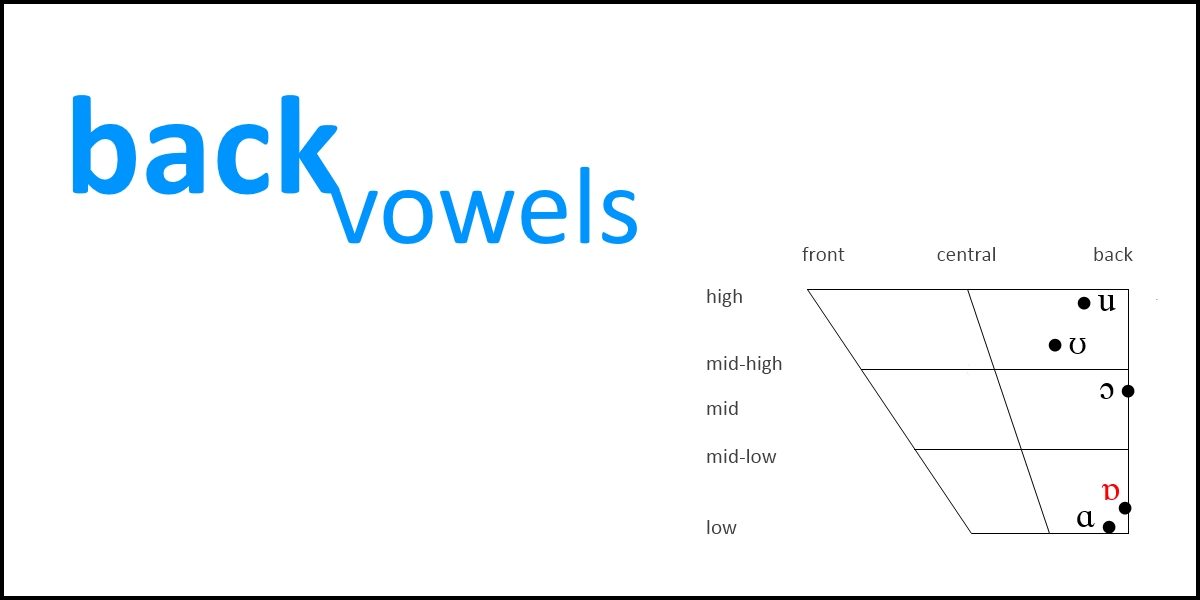 The largest group of simple vowels is the back vowels. These are shaped with the back of the tongue raised towards the soft palate (velum). There are six back vowels, compared to the four front vowels and two central vowels. 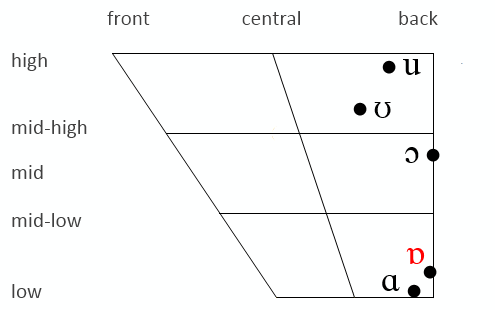 Figure 11. American and British back vowels.

The first of the high vowels is /u/ (as in food). It is made with rounded lips and it is known as the HIGH BACK ROUNDED vowel. It is a long vowel and so may be transcribed as /uː/.

The second high vowel is /ʊ/ as in good. It is similarly made with rounded lips. However, it is also articulated with a somewhat lowered tongue elevation, close to the mid-high position. In addition, it is articulated slightly further towards the central position of the mouth than the /u/ vowel. It is, however, fairly near to the back and so it is a fairly-back vowel. This lowered and centralized high back vowel may, consequently, be referred to as the mid-high, fairly-back rounded vowel. Or, to simplify to a three-part label, as the MID-HIGH BACK ROUNDED vowel. This is a short vowel.

The vowel made with mid tongue elevation is /ɔ/ (as in hawed). Being unrounded, it may be labeled as the MID BACK ROUNDED vowel. Speakers of General American English (GA) may produce the /ɔ/ vowel with a slightly more lowered and slightly more centralized tongue position than the vowel as used by speakers of Standard Southern British English (SSBE). Nevertheless, they are sufficiently similar to both be described as a mid back rounded vowel. They are long vowel sounds and so may be transcribed as /ɔː/.

The final two back vowels are both made with a relatively low tongue elevation.

The vowel with the lowest tongue elevation is /ɑ/ (as in American and British pronunciations of the word palm). This is a fully open vowel sound and it is produced with unrounded lips. It is, therefore, the LOW BACK UNROUNDED vowel. It is a long vowel and, as such, may also be transcribed as /ɑː/.

The final vowel illustrated in Figure 11 is produced with slightly higher tongue elevation and slightly retracted tongue position. It is the sound /ɒ/, as in SSBE pronunciations of the words cot, pot and lot. Being very nearly articulated in the same position as /ɑ/, it is also described as a low back vowel. However, it differs from /ɑ/ in that it is short and articulated with rounded lips. We can, therefore, describe it as the LOW BACK ROUNDED vowel. This vowel does not appear in General American English. GA typically uses /ɑ/ where SSBE uses /ɒ/. So, whereas SSBE distinguishes between the vowels in palm /pɑm/ and lot /lɒt/, GA does not – realizing both palm /pɑm/ and lot /lɑt/ with the same /ɑ/ vowel.

NEXT>> Summary of Simple Vowels