Age of Acquisition of Speech Sounds 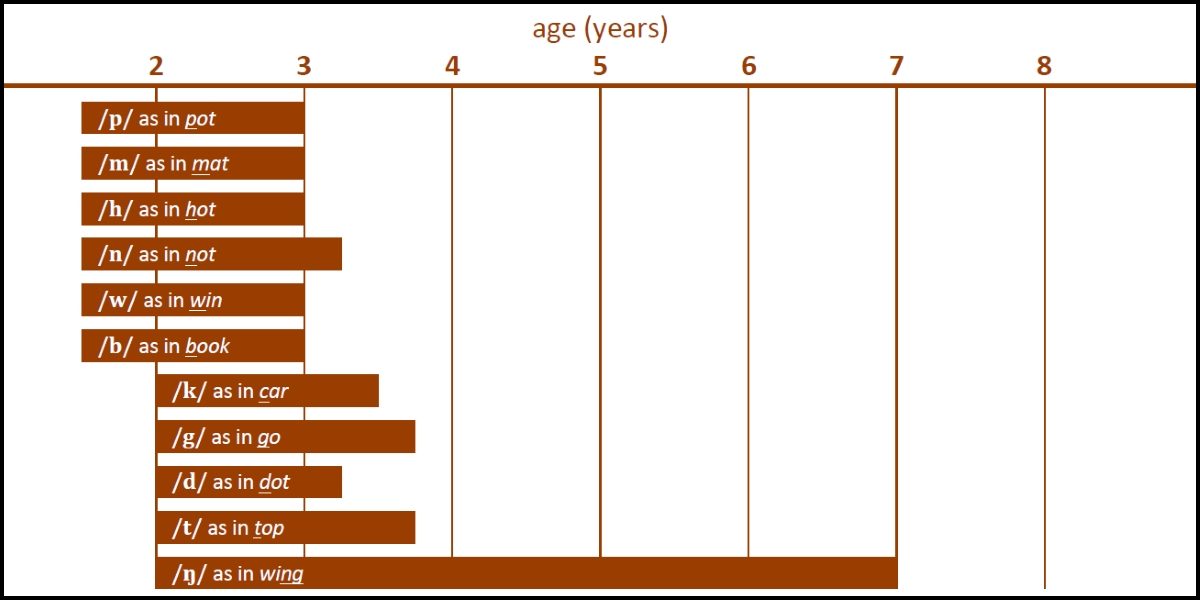 Normative data refers to data that characterize what is typical of a particular large group at a specific point in time. Such data provide summary descriptions of the group’s behavior. So, for example, in order to understand the order of acquisition of speech sounds, researchers have studied large groups of children and identified which particular speech sounds are used at what particular age. Their investigations, therefore, summarize what is typical of an average child at a particular age. Such investigations allow us to make summary statements such as, ‘We do not expect a child of 1;00 years  to be using the sound /r/ (as in the word rabbit).’ In other words, it is not the norm that a 1;00 year old child would be using the sound /r/. It is precisely because we have normative data available that we can make such claims.

The process of collecting normative data seems fairly straightforward. There appear to be two main methods. One way is to identify a large group of typical children across a wide age range – say from 1;00 year to 12;00 years of age – and then to simply make a record of all the speech sounds that each child uses. We can then draw up a chart of the particular speech sounds that 1;00 year olds use, the sounds that 2;00 years olds use, and so on. The other main method would be to select a group of typical children who are all the same age – say 6 months old – and to follow them for several years, keeping a record of the speech sounds that they use at particular ages as they grow older. This latter method is, of course, extremely time-consuming but such so-called longitudinal studies are used from time to time in social research.

Several studies have been conducted in order to provide normative data about the development of speech sounds. Now, if speech develops in the same way for all children who speak English, for example, it seems reasonable to assume that each study of native English speakers would have produced the same normative data. Unfortunately this is not the case. There are many reasons for these differences but the main ones have to do with the different methods that researchers have used to collect data. For example, some studies collected examples of speech sounds by having the children imitate words that the researchers spoke first. In contrast, other studies have used samples of non-imitated, spontaneous speech. Some studies have put more emphasis on analyzing children’s production of single words, whilst others have given more weight to investigating words spoken in a series. There are subtle differences in pronunciation depending on whether or not a word is spoken on its own or as part of more conversational, connected speech. Another major difficulty with these studies is that they are usually conducted in a specific geographical area. So, for example, the group of children who were studied may all have been drawn from north-east America. This then raises the question of how typical these children are of all children who learn to speak English. Are they, for example, typical of children who are raised in the north-east of England, or Scotland, or Nigeria, and so on? There are several other reasons why the various normative studies have not yielded the same results. Our purpose here, however, is not to provide a detailed account of the strengths and weaknesses of differing research methods but to highlight the fact that there is no universal answers to questions such as, ‘What speech sounds will a three-year-old be able to say?’ or ‘When will my child start using the sound /l/?’ The answers depend on which set of normative data you choose to refer to.

There are a number of early studies (Templin, 1957; Sander, 1972; Prather, Hendrick, & Kern, 1975) and a number of more recent studies (Grunwell, 1981; Smit, Hand, Freilinger, Bernthal, & Bird, 1990; Goldman & Fristoe, 2000) to draw on. For the purposes of this series of articles (English Speech Sounds 101), we will refer to the diagram in Figure 2. This represents combined data from Sander (1972), Grunwell (1981) and Smit et al. (1990). The left-hand edge of each horizontal bar represents the age at which 50% of children produce the particular consonant correctly and use it in their speech. The right-hand edge of each horizontal bar represents the age at which 90% of children have mastered the use of the particular consonant in their speech. As this diagram is constructed from different sources it should be treated with caution. Whilst it does provide insights into a plausible developmental sequence it should not be read as an invariant progression from one sound to another. Rather, it is a guide to a likely pattern of acquisition. You should also note that the diagram only shows data for consonants: vowels are generally considered to have been acquired by the age of 3;00 years.

This series of articles (English Speech Sounds 101) is concerned with a description of the ways in which the egressive airstream from the lungs is modified to create around 20 vowel speech sounds and 24 consonant speech sounds in English. In order to facilitate this description, and to create written records of speech sounds that can be re-read and analyzed, we require a notational system that can be used to transcribe speech. This is the topic of the next section, i.e. transcribing speech sounds.