Disruptions in the Communication Chain 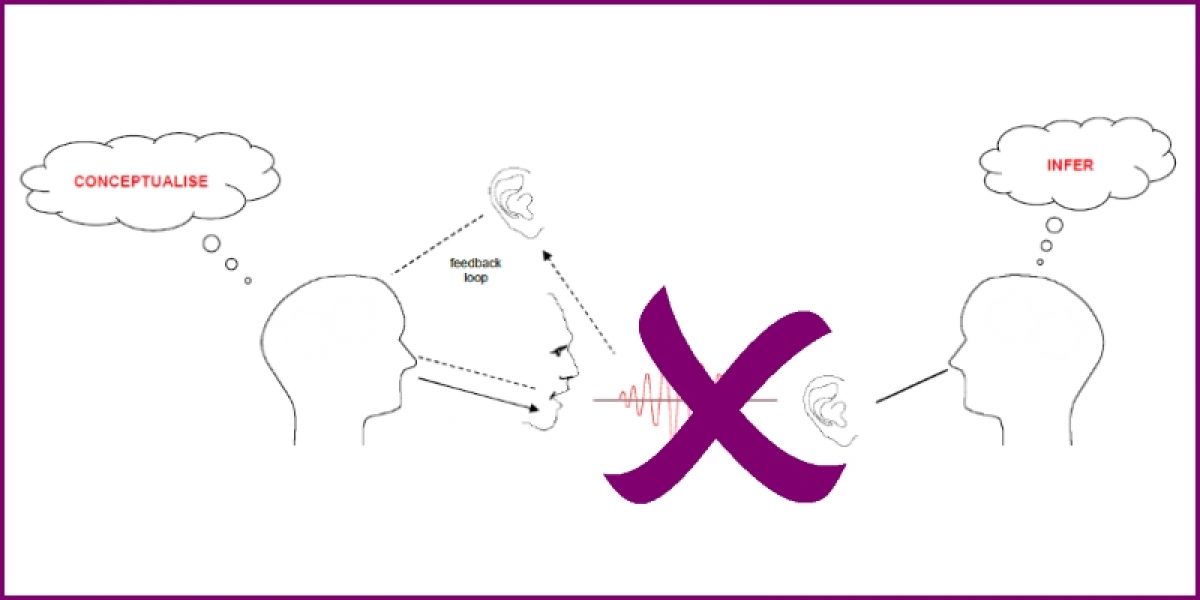 Considering the complexity of the process of human communication, it is not surprising that a sizeable number of people present with some form of communication difficulty. It is estimated that around 2.3 million people in the United Kingdom have a communication disorder. Of these, approximately 800,000 have a severe disorder and 1.5 million have a moderate disorder.

Figure 1. The Communication Chain (click for an enlarged image)

Disruptions at the Linguistic Level (Agent)

At this level the speaker (agent) formulates his or her thoughts and encodes them into the words and word combinations that build a meaningful utterance. Trouble at this linguistic level with formulating thoughts into words result in an expressive language difficulty, i.e. the person is unable to express himself or herself clearly by choosing an appropriate vocabulary and/or sequencing words together to form meaningful phrases.Expressive language difficulties may occur, for example, in persons with learning disabilities and persons who have suffered a stroke or head injury.A common communication disorder at this level is aphasia:

Aphasia (sometimes dysphasia) is a communication difficulty that occurs when the oxygen supply to the brain is interrupted, causing damage to the brain tissue of the so-called speech and language areas. This could be the result of a stroke or a head injury. Aphasia is a complex language disorder that can be thought of as a disruption of the ability to use symbols (writing words, speaking words, using numbers). Consequently it affects the person’s verbal expression, their ability to write and their arithmetic skills.

Persons with dysphasia may have word finding difficulties, i.e. they have difficulty retrieving vocabulary items from their internalized dictionary. For example, the person may be trying to tell you that they cannot find their (eye) glasses but struggle for the correct word, perhaps calling them windows, telescopes, microscopes, or similar. Consequently, this adversely affects their ability to form meaningful utterances.

Disruptions at the Physiological Level (Agent)

There may be impairment in nerves (lesions) which disrupts the ability to transmit signals from the brain to the muscles of the mouth, tongue, lips, vocal folds (vocal cords) and the muscles of breathing. The consequence of this is that there will be difficulty in moving these structures. These disturbances in muscular control create a difficulty at the physiological level known as dysarthria.

A typical example of this would be a person who has suffered some form of neurological damage, perhaps as a result of a stroke or a road traffic accident, which prevents the nerves from the cortex of the brain passing the electrical signals properly. In severe cases there may be paralysis of some parts of the vocal apparatus.

People with dyspraxia experience difficulty in performing voluntary movements. So, for example, if you asked a person who has dyspraxia to lick their lips they may struggle to do this. They may be unable to voluntarily perform the smooth muscle movements required.

This may also be true of a person who has dysarthria. However, if you were to observe the person with dyspraxia whilst they were eating you would likely observe them licking their lips. In other words, when they are carrying out actions unconsciously they are able to perform the required movements accurately and with ease. The person with dysarthria, in contrast, would still not be able to lick their lips when eating, owing to neurological impairment that prevents the muscles of the vocal apparatus functioning properly.

People with unimpaired hearing constantly listen for mistakes in their speech and make many fine-tuned adjustments to the muscles of the vocal apparatus as they speak. In contrast, a hearing impairment can reduce the ability to adequately monitor the production of speech sounds, leading to many errors and resulting in an articulation difficulty.

In an effort to compensate for an inability to monitor production, persons with hearing impairment may exaggerate their articulation of consonants and vowels, and be more premeditated in their attempts to form speech sounds. The resulting speech can, therefore, appear slow, deliberate and laborious.

Typically, as well as articulation being affected, the voice is also affected. The hearing impaired person will have more difficulty monitoring the intonation contours of his or her speech and the pitch may sound dull and monotonous.

Disruptions at the Acoustic Level

The above discussion of potential breakdown at the linguistic and physiological level has focused on some disruption of the agent’s capacities. The one level where potential breakdown is evidently not related to speaker difficulties (and, as we shall see later, the listener) is the acoustic level. Nevertheless, disturbances at this level can, and do, occur.

One of the most obvious examples in western culture is the attempt to hold a conversation in a noisy night club. You may be less than one meter away from your conversational partner but, owing to the excessive loudness of the music, your utterances may be drowned out: you can neither speak loudly enough to be heard nor hear the relatively quieter speech of the other person.

A less obvious example of disruption at the acoustic level would be attempting to communicate under water: scuba divers typically use a gestural system to compensate.

Disruptions at the Physiological Level (Recipient)

At this level we are primarily concerned with the ear.

The recipient may either be unable to perceive the agent’s speech (sound wave) and/or transmit the necessary nerve signals to the brain. In such instances the recipient will be unable to process verbal signals and he or she will likely have to make greater use of non-verbal communication to assist understanding.

Disruptions at the Linguistic Level (Recipient)

Difficulties unraveling and decoding words into meaningful concepts result in a comprehension disorder or receptive language difficulty, i.e. the person has difficulty understanding what is being said to them.

Again, persons with learning disabilities and those who have suffered strokes and head injury may also present with a receptive language difficulty. Indeed, comprehension difficulties are a common feature of aphasia. Aphasia is not only a disruption of the ability to use symbols expressively, it also affects the person’s ability to comprehend symbols (written words/numbers and spoken words/numbers).

Stroke and head injury have been given as examples of anatomical injuries resulting in:

This illustrates an important point about communication disorders, i.e. people can have difficulties at one or more than one level in The Communication Chain.