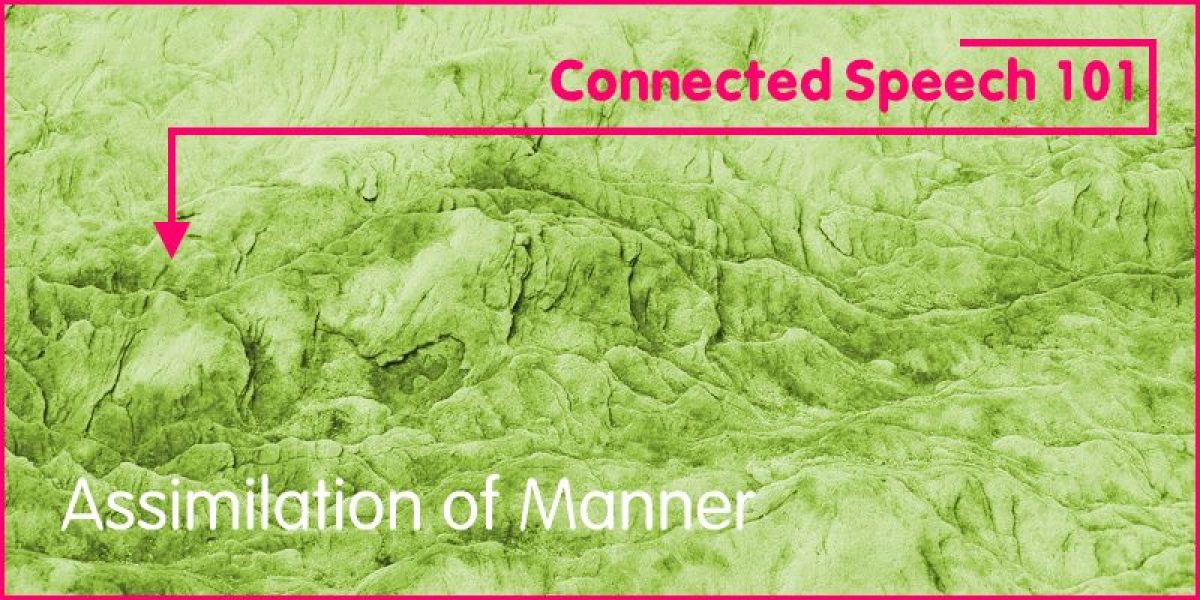 In a context such as this, in which /d/ appears word-finally immediately prior to a nasal across a word boundary, the /d/ becomes a nasal, i.e.

The above example – of good morning /gʊd mɔnɪŋ/ being realized as [ɡ̠ʊ̃m mɔ̃ːnɪ̃ŋ] – is an example of nasal assimilation. Sometimes it is difficult to appreciate the effects of an assimilation such as this when presented with just a two-word phrase. The effects can often be better appreciated when the example phrases appear in longer utterances. So, if you find it difficult to detect this nasal assimilation when simply saying, “Good morning!” try saying it aloud in a longer utterance such as, “It’s going to be a good morning today.” Obviously, if you are an especially careful speaker who enunciates each word with clarity then you will find it difficult to detect any assimilation. For most speakers, however, especially when engaged in informal, rapidly articulated connected speech, such assimilations come to the fore. Whatever your personal circumstance, you should appreciate that the /d/ in good can transform into [m]. By doing so, it retains its voicing (both /d/ and /m/ are voiced). However, it assimilates both the place of articulation of the word-initial /m/ in the word morning, and its manner of articulation. Hence, a voiced alveolar plosive is transformed through an assimilatory process into a voiced bilabial nasal. In fact, these assimilations of place and manner occur whenever a word-final /d/ appears before a nasal across a word boundary. This can be summarized as follows.

Note that this assimilatory process creates new phonemes at the same place of articulation as the nasal. Examples include the following.

The environment of the last example above (I couldn’t go) does not – at first sight – appear to contain a word-final /d/ before a nasal: and certainly not before the velar nasal /ŋ/. We know that the velar nasal does not appear in syllable-initial position in English and so there are no English words that begin with this sound. It would not be possible, therefore, to find examples of a word-final /d/ appearing before a word-initial /ŋ/. However, closer examination of I couldn’t go demonstrates how coarticulations can create contexts that otherwise would not occur if one were only considering stringing dictionary words together. In the phrase couldn’t go /kʊdnt gəʊ/, we see that a word-final /nt/ appears before a velar across a word boundary. Now, we saw earlier that word-final /nt, nd/ become velar before velar plosives. So, it is likely that couldn’t go /kʊdnt gəʊ/ would be realized as [k̠ʰʊ̃dŋk̚ gəʊː], with the /nt/ assimilating to [ŋk]. It is likely then that the /d/ assimilates the velar place of articulation of the immediately following velar nasal, i.e. [k̠ʰʊ̃ŋŋk̚ gəʊː], and that the /k/ disappears, i.e. [k̠ʰʊ̃ŋŋ gəʊː]. This results in the plausible realization [æ k̠ʰʊ̃ŋ̚ gəʊː].

The rule that we have been considering here can be summed up in the following statement.

Word-final /d/ becomes nasal before a nasal, at the same place of articulation as the nasal.

In the last example of the three above (I haven’t gone), this does not appear to represent an environment in which a word-final /v/ precedes a nasal. However, coarticulations may create such an environment. It is plausible that the final /nt/ of haven’t /hævnt/ becomes velar before the word-initial velar plosive of gone /gɒn/, i.e. [hæ̃vŋk̚ g̠ɒ̃n]. This now creates an environment in which the velar fricative /v/ appears immediately before a nasal (albeit not across a word boundary), i.e. [hæ̃vŋk]. Consequently, the /v/ assimilates to the nasal, becoming [ŋ], i.e. [hæ̃ŋŋk]. The /k/ now disappears, i.e. [æ hæ̃ŋŋ g̠ɒ̃n], leading to the plausible pronunciation [æ hæ̃ŋ̚ g̠ɒ̃n]. This is the first example of a phonemic assimilation that is not de-alveolar assimilation but, rather, the assimilation of a labiodental fricative. This process can be stated as:

Word-final /v/ becomes nasal before a nasal, at the same place of articulation as the nasal.