You are here: Home > Speech > Consonants 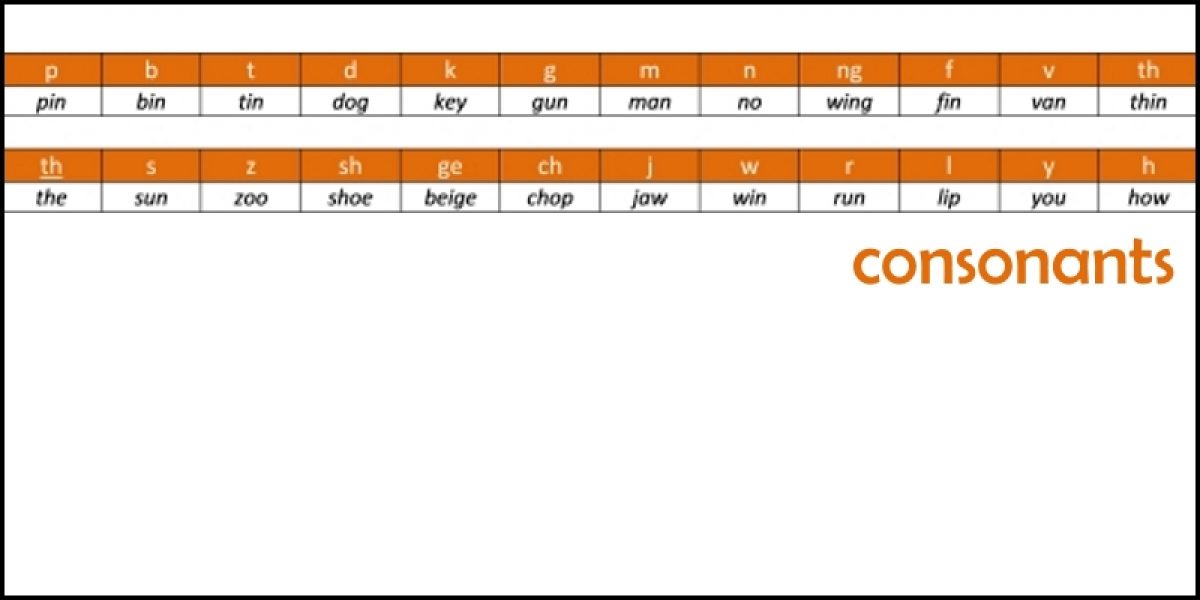 We have seen elsewhere (speech) that (articulatory) phonetics is the subcategory of speech that studies articulation, i.e. how the sounds of particular languages are articulated in particular contexts. [The other subcategory is phonology.] This article is restricted to a discussion of consonant sounds, for two reasons. First, vowel sounds are complex, and consequently difficult to describe. Second, in the majority of articulation disorders it is the consonants that are most disrupted, and so a focus on consonants can better help our understanding of speech disorders.

Consonants are closed sounds. This means that there is some type of obstruction to the airflow from the lungs by parts of the mouth coming into contact with each other, or very nearly contacting, thus closing off the free flow of air. For example, the lips could come together for the sound ‘b’ as in the word ball, or the tongue tip could almost contact the gum ridge (alveolar ridge) just behind the upper incisors for the sound ‘s’ as in sun. These contacts, and near contacts, impede the free flow of air through the vocal apparatus1. It is this kind of closure that characterizes consonant sounds. In English there are approximately 24 consonants and these are arranged into five main groups: (1) plosives, (2) nasals, (3) fricatives, (4) affricates, and (5) approximants. We will now consider each of these in turn.

Plosive consonants are oral sounds, i.e. the soft palate is raised so that air from the lungs cannot pass upwards into the nasal cavity. The air can only, therefore, escape through the oral cavity. All plosives are produced by a complete obstruction of the airflow at some position in the mouth, for example by the lips coming together. Air from the lungs is then compressed behind the temporary obstruction and the air pressure builds up in the mouth. The obstruction is then removed (in this case, by the lips parting) and the air rushes out of the mouth with a slight ‘explosion’, hence the name ‘plosive’.

These are produced with the two lips coming together to form a complete closure and they are, therefore, known as bilabials, i.e. two lips. They are:

You can test for yourself the effect of the voicing. Hold your larynx gently but firmly between the index finger and thumb of one hand and say the sound ‘p’: remember to say it as it sounds at the start of the word pit and not as the name of the alphabet letter P, which would sound like ‘pee’. You should be unable to detect any continuous vibrations in your larynx – because the vocal folds are not vibrating, i.e. the sound ‘p’ is voiceless. Now say the sound ‘b. This time you will feel a slight vibration through your fingers as the vocal folds vibrate, i.e. the sound ‘b’ is voiced. The only difference, then, between ‘p’ and ‘b’ is that ‘b’ is voiced and ‘p’ is not.

The developing child usually consolidates the use of bilabial plosives between 1;06-2;00 years of age.

The second pair of voicelessvoiced plosives is articulated with the tip of the tongue contacting the alveolar ridge just behind the upper incisors. They are:

Again, by placing your fingers on your larynx as you articulate these sounds, you should be able to determine that ‘t’ is voiceless whereas ‘d’ is voiced.

The developing child is usually expected to have consolidated the use of alveolar plosives between 1;06-2;00 years of age.

The third pair of plosive sounds is made with the back of the tongue contacting the soft palate or velum. They are:

The velar plosives take a little longer for the developing child to acquire, typically emerging between 2;00-2;06 years but they may not be fully consolidated until 2;06-3;00 years of age.

Nasal sounds are similar to plosives in that there is a complete obstruction of the airflow in the mouth but, in contrast, the air pressure is not allowed to build up behind the obstruction. Rather, it is allowed to escape through the nasal cavity by lowering the soft palate. Consequently, unlike plosives, it is possible to take a breath and prolong a nasal sound.

There are only three English nasal consonants and they are all voiced. They are made in exactly the same position in the mouth as the plosives and, therefore, they are named similarly:

bilabial nasal ‘m’ as in mop and ham

alveolar nasal ‘n’ as in not and loan

velar nasal ‘ng’ as in wing and ring

For the developing child, both the bilabial nasal ‘m’ and the alveolar nasal ‘n’ are typically consolidated between 1;06-2;00 years of age. The velar nasal ‘ng’, however, emerges a little later – appearing between 2;00-2;06 years but may it not be fully consolidated until 2;06-3;00 years.

These are formed by a narrowing of the oral cavity by two articulators, such as the lips, teeth, tongue or palate, coming into near contact. The air forcing its way through the narrow gap creates turbulence or friction, hence the name fricative.

Like plosives, fricatives mainly occur in voicelessvoiced pairs. There are four of these:

These are articulated with the near contact of the bottom lip and the upper incisors. They are:

‘f’ as in fan and half (voiceless)

‘th’ as in thin and hearth (voiceless)

‘th’ as in that and loathe (voiced)

These are late-emerging which are typically not consolidated until at least around 4;06 years of age.

These are formed by the front of the tongue nearly contacting the alveolar ridge. They are:

‘s’ as in sun and house (voiceless)

There is controversy over when ‘s’ is consolidated. Some argue that this happens as early as 3;00-3;06 years. However, there appears to be a wide variation in the acquisition of this sound and some children still may not have fully consolidated the sound by 4;06 years. The voiced counterpart ‘z’ is generally recognized to emerge later than the voiceless sound, becoming consolidated between 3;06-4;06 years.

These are made further back in the mouth, with the middle of the tongue coming into near contact with the palate just behind the alveolar ridge. They are:

‘sh’ as in shop and bash (voiceless)

‘zh’ as measure and beige (voiced)

There is one more fricative sound in English which is distinguished on the basis that it is the only fricative that does not pair with another sound. It is made deep down in the throat by allowing air to escape through the gap between the vocal folds (the glottis):

‘h’ as in house and who (voiceless)

The glottal fricative is typically the first fricative to emerge and it can usually be identified in the speech of children between 2;00-2;06 years.

All of the consonant sounds described so far are produced with either a complete obstruction of the airflow or a narrowing of the mouth passage. Affricates are, however, produced by a combination of these two methods. They begin with a complete obstruction formed by the tongue tip contacting the alveolar ridge, like alveolar plosives. Then the air, instead of being released out of the mouth suddenly with an ‘explosion’, is released slowly with friction behind the alveolar ridge as the tongue moves backwards towards the palate. Consequently, they are known as post-alveolar affricates. They are:

‘ch’ as in chore and hatch (voiceless)

bilabial approximant ‘w’ as in win and we

palatal approximant ‘y’ as in yes and yell

If we were to list all the speech sounds in a particular language that a person is capable of articulating this constitutes their phonetic inventory. Table 1 summarizes all 24 of the English consonant sounds in relation to their manner of articulation (i.e. whether they are a plosive, nasal, fricative, affricate or approximant) and their place of articulation (i.e. bilabial, labio-dental, dental, alveolar, post-alveolar, palatal, velar, glottal).