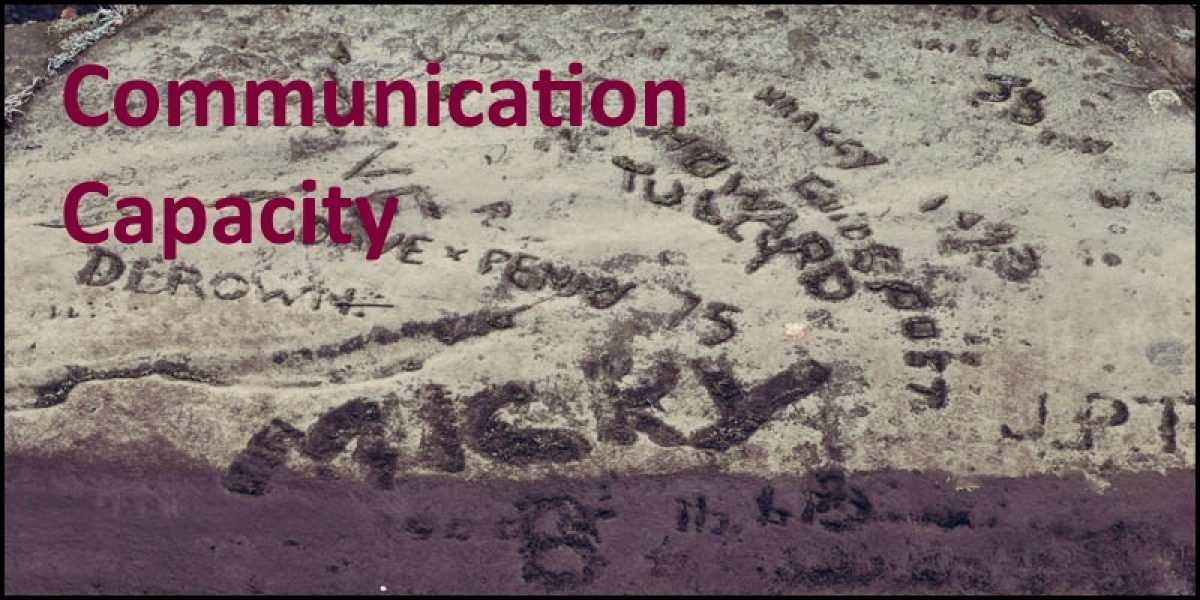 According to the encode-decode model of communication, in order to achieve effective communication, the sender-receiver and the channel must exhibit a satisfactory degree of capacity. Capacity is the ability of the sender-receiver to successfully encode and decode the message, and the ability of the channel to successfully transmit the message. [The channel is simply the medium used to transmit the signal from the sender to the receiver – in the case of spoken language, it is usually air.]

Capacity can be reduced in two main ways: by (1) physical noise, and (2) semantic noise.

Physical noise refers to distortions in the channel when transmitting the message, such as loud traffic passing by whilst you are trying to hold a conversation; trying to speak in a noisy nightclub.

We can simulate physical noise through analogy with written communication. For example, if we take a written text and randomly delete a certain percentage of letters this will imitate the effects of noise distorting the channel of communication, thereby impeding transmission of the message. To demonstrate this, first I selected a written text. Then I numbered each letter, punctuation mark and space in sequence. I then used a randomly generated series of numbers to delete a particular percentage of these characters. So, for example, if the start of the randomly generated series was 3, 17, 29… then the characters in the 3rd, 17th and 29th positions in the sequence of characters that make up the text would be deleted. Figure 1 shows the text with 40% deletions, i.e. with 40% noise.

Figure 1. Text with 40% noise [To view enlarged images of all Figures click here]

I assume that you are unable to fully comprehend this written text: there is simply too much noise interfering with the channel and, thereby, preventing unequivocal transmission of the message. In scanning this distorted text, however, you may have identified what you believe to be actual words. For example, in L1 (i.e. line 1) the possible words the and it; in L3 moon; L5 for; L6 machine; L7 infant; L8 but, and L9 because. However, we cannot be fully certain that this is correct, as there is not enough contextual information to assist us in our decision – too many characters have been deleted. It may be, though, that you are capable of making an informed guess. So, for example, what do you think the following sequence from L5 might be?

Any ideas? Well, let’s take a look at the same text but this time with just 10% noise (Figure 2).

This should now be a little easier to understand. You may still not be able to pick up all the meaning but you probably get the gist of the message. Can you now work out the following L5 sequence?

You can probably now guess that this sequence should read:

Your interpretation of this is probably supported by other partially distorted (L1, L2, L10) and undistorted (L2) occurrences of the word Christmas in the text. But what of the word infant in L7 that we referred to earlier? Is this really the word infant as we first supposed? We can go some way to interpreting this by examining its context of occurrence. The infant segment occurs in the following sequence:

Does this help? You can strengthen your conclusions by considering the other words that make up this text, e.g. commander (L2), trenches (L3), tracer bullets (L4), machine gu[n] (L6), shoot (L7). All these words set the overarching context as being war. You can probably now draw on your wider understanding of social context/history and place this text as being some sort of message related specifically to the First World War and the Christmas Day cease fire of 1914. So, have you now deduced the proper context of the infant segment in L7? Take a look at Figure 3 that shows the complete text with no noise in order to confirm your decision.

Clearly, the analogy between noise in a written text and noise interfering with the channel of spoken language is not flawless. For example, with a written text you are able to go back over troublesome sections and re-read the text. This is, of course, not possible with unrecorded spoken language: the speaker speaks the message and then it’s gone. However, in the same way that you were able to build up clues from the context of occurrence of the written characters, we are able to build our understanding of spoken language by similarly attending to the context of occurrence of particular sounds and sound segments. [We actually use a number of linguistic knowledge bases to assist us in making sense of potentially distorted signals.]

Semantic noise refers to distortions in meaning (encoding/decoding) originating from the sender and/or the receiver, such as when the sender and receiver do not share a common language. For example, someone could be talking at length in Vietnamese but you simply do not understand the language (the code) or a speaker may make incorrect assumptions about how much shared knowledge you both possess – they may assume you know all about uncle John’s recent fall but if you do not then the communication potentially breaks down (see Figure 4).

Figure 4. Reduction in capacity because of physical and semantic noise