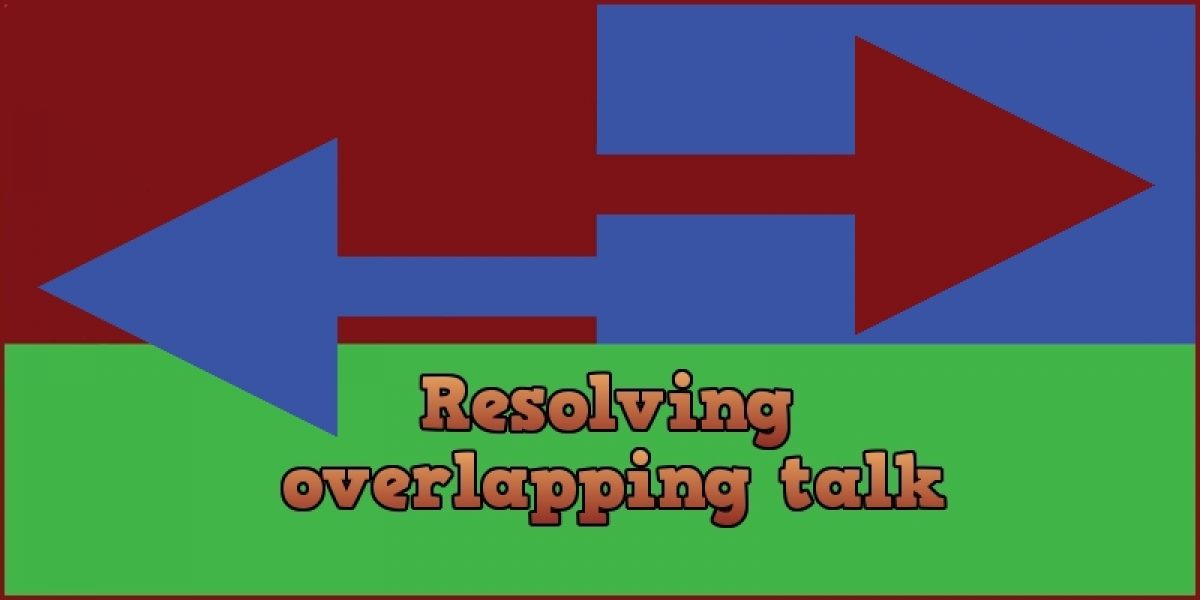 We have noted elsewhere (see Definition of Conversation) that, in the relatively few instances when there is overlapping talk, interlocutors attempt to rectify the situation by reverting to a state of one, and only one, speaker as quickly as possible. How do they achieve this? Well, there are a number of strategies. We will consider
two:

We have already noted one example of dropping out in the last example above (see Violative Interruption).

This is reproduced below for convenience.

1 Amanda:  mind you I would

We noted that Amanda appeared to be engaged in an ongoing stretch of talk and that both Kevin and Hilary interrupted her. It is evident that, as they speak, Amanda drops out: her talk tails away with gone so far… in line 2. As Amanda drops out, so Kevin and Hilary continue with their talk, albeit that theirs is violative interruption. A further example of dropping out is provided in the following extract from a conversation between three people.

In line 1, Dale does not select the next speaker under Rule 1. Consequently, any interlocutor could self-select as the next speaker under Rule 2. Again, we see that, at the appropriate transition relevance place at the end of Dale’s line 1 turn-constructional unit, both Krishna and Jean attempt to self-select as the next speaker. They both attempt to take up their turn at talk at the same time and so their utterances overlap in lines 2 and 3. This is, therefore, another example of inadvertent overlap. However, in this instance, we see that Krishna drops out and thereby relinquishes his claim to a turn at talk. Jean, therefore, continues with her turn.

In contrast to the examples of dropping out highlighted above, not all speakers are as willing to relinquish their turn at talk. In these instances there is what is known as competitive allocation. That is to say, one or more of the interlocutors competes to either retain their turn at talk or to take over the turn at talk. Consider the following, taken again from the conversation between Nick and Mary.

1 Nick:  that way I de//cided TO KEEP THE MONEY TO MYSELF

As in the previous example drawn from this conversation, Mary once more attempts a violative interruption by trying to take a turn at talk at a point where there is no appropriate transition relevance place. She attempts to begin her talk in line 2 within the second syllable of the word decided being spoken by Nick in line 1. However, on this occasion, Nick is unwilling to drop out. He, therefore, competes to retain his turn by upgrading his talk. He does this by increasing his loudness and continuing to speak. This has the effect of overriding Mary and she can be seen to drop out in line 2, almost before she has got started. Increasing the loudness of one’s talk is a frequent method of upgrading. Further strategies include slowing the rate of speech, lengthening the vowel sounds and accompanying the talk with non-verbal gestures, such as raising a hand or a finger. These non-verbal accompaniments act as holding devices that serve to indicate to the person who is attempting to interrupt that the current speaker is not yet ready to relinquish their turn. Competitive allocation does not always occur at moments of violative interruption, however. Consider the following example of inadvertent overlap.

1 Paul:   can you help with the map reading or not?

It is evident that Craig and John’s overlapping talk in lines 2 and 3 is inadvertent because it can be seen to occur at the transition relevance place at the end of Paul’s line 1 question can you help with the map reading or not? Again, this is an instance where two interlocutors have both attempted to self-select as the next speaker at the same time. As they both begin their talk, Craig appears to be more hesitant in line 2, with his yes…erm…but… John, however, is less indecisive and he upgrades his talk by increasing his loudness for part of his line 3 utterance, i.e. BUT I CAN’T GET THERE. Once it is apparent that Craig has dropped out, John reduces his loudness to a typical conversational level again as he completes his utterance with by myself, you know. In this instance, it can be seen that the competitive allocation procedure has worked to resolve the overlapping talk in a relatively short time. In fact, this is true of most attempts to resolve overlapping talk, i.e. it is typically resolved quickly with only a small number of words being overlapped.