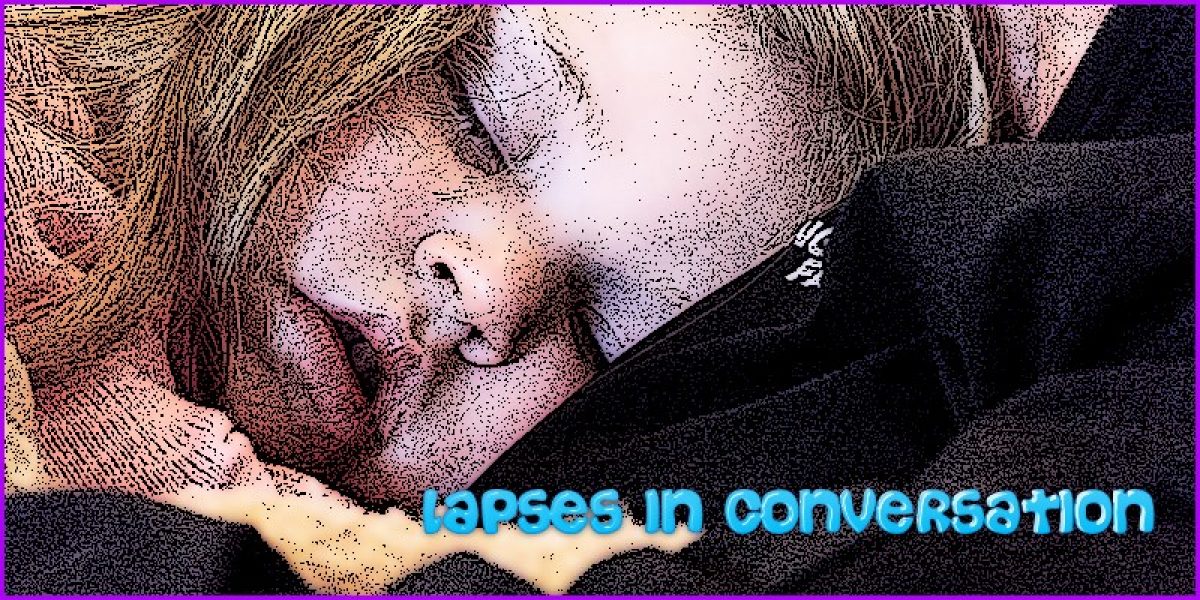 Whereas gaps can be seen to be delays in the application of turn allocation rules (Rule 2 and Rule 3), lapses in conversations result from the non-application of the rules. Consider the following conversation involving three people.

In this encounter, Steven initiates in line 1 with hello Simon. Now, because this utterance specifically selects the next speaker (i.e. Simon is named), Rule 1 is invoked. Accordingly, Steven stops talking and Simon takes up the next turn at talk under Rule 1 (hello in line 2). As this utterance does not select the next speaker, Rule 1 (current speaker selects the next speaker) does not apply and Rule 2 (next speaker self-selects) comes into play. However, neither Steven nor Angelika self-select under Rule 2 and so Rule 3 (current speaker may continue) now comes into force. However, Simon does not continue his talk at this juncture and – owing to the non-application of Rules 1, 2 and 3 – there is a lapse in the conversation of 5.3 seconds (line 3). Eventually, after the lapse, Steven takes up the talk again in lines 4-5 (so (..) how do you like the hot weather Angelika?), self-selecting as next speaker by invoking Rule 2. We see, then, that lapses arise owing to the non-application of Rules 1-3.

When is a gap a lapse?

Let us look again at the first example provided above under the sub-heading Gaps, which is reproduced below.

1 Graeme:  seems strange to me

3 Brian:   I wouldn’t have thought so

In relation to this sequence, we argued that the silence in line 2 represents a gap in the conversation owing to a delay in the application of Rule 2 i.e. in line 1 Graeme did not select the next speaker (under Rule 1) and subsequently Brian self-selects as next speaker in line 3 under Rule 2. But just how robust is this interpretation?  Suppose that the duration of the silence in line 2 were not 1.5 seconds but 12.0 seconds, i.e.

1 Graeme:  seems strange to me

3 Brian:   I wouldn’t have thought so

How would this affect our interpretation? Well, we are probably likely to argue that this now represents a lapse, i.e. in line 1 Graeme did not select the next speaker (under Rule 1) and so Rule 2 comes into play. However, neither Brian nor Graeme self-select under Rule 2 and Graeme also does not continue his turn at talk under Rule 3. Eventually, however, after a long silence (12.0 seconds in line 2) Brian picks up the talk again in line 3, self selecting under Rule 2. We are likely, therefore, to argue that, in this instance, the silence is a product of the non-application of the turn allocation rules rather than just a delay in their application.

Of course, the only difference in these scenarios is the duration of the silences. It appears that when the silence is relatively short (perhaps no more than about 1.5 seconds) we are inclined to interpret this as a gap whereas, if the silence is longer, we are more likely to interpret the silence as a lapse in the application of the turn taking rules. Why should this be so? Well, we have already noted that conversations are highly coordinated interactions with extremely short pauses between turns at talk, typically lasting only microseconds. Interlocutors appear to be attuned to this dynamic and they, therefore, exhibit a low tolerance for waiting for conversational partners to take their turn at talk. A silence of only about three beats of the speech rhythm appears to be tolerated in the turn-taking sequence. Anything much longer than this is potentially interpretable as a breakdown in the application of the turn allocation rules, i.e. a lapse.

As well as this (unspecified) timing of silences, lapses are often differentiated from gaps by their association with so-called boundary markers. Take a look at the following.

1 Sanjeev:  I just didn’t realize it was

The silence in line 4 is interpretable as a lapse in the conversation, owing to the non-application of the turn-allocation rules. Now, notice that when the talk is eventually picked up again by Sanjeev in line 5 his utterance is preceded by the word well. This word appears to be functioning to mark a closing down of the previous topic and to signal a move into another topic, i.e. it signals a topic shift. Other words which frequently appear as boundary markers, serving to indicate either a summing up of what went on before or a move into another topic, include okay, right, anyway and so. They are often spoken with a lengthened vowel (e.g. we::ll) and followed by a slight pause, or both. This serves to strengthen their boundary marking function.

Features such as the duration of silences that will be tolerated and the pervasiveness of boundary markers are influenced by many factors. There will be, for example, cultural differences and differences associated with the purpose of the interaction (contrast a goal-oriented business meeting with the purpose of conveying information rapidly with a leisurely, relaxed, rambling conversation aimed at bonding and building friendships). In addition, there will be constitutional differences such as the number of persons involved in a conversation, which may actually change during the course of the interaction. Factors such as these and structural differences, such as there being no strict limit to the size of a turn-constructional unit, will all influence the overall structure of a conversation and how the interlocutors’ both manage and interpret the ongoing sequence of talk.