You are here: Home > Language > Aphasia 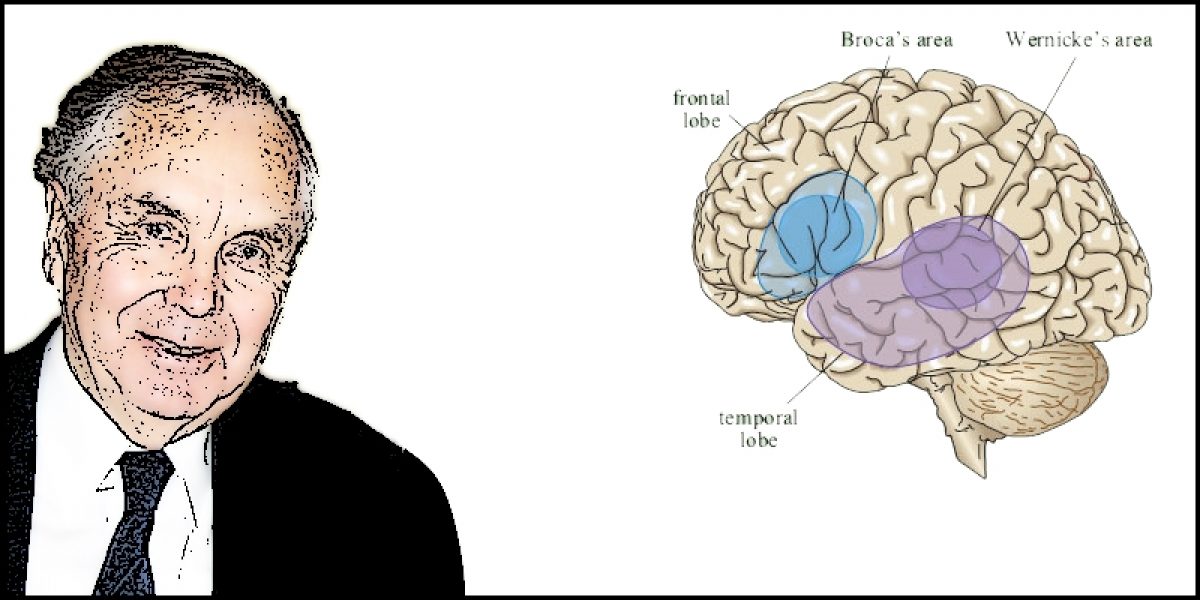 Aphasia (also known as dysphasia) is divided into two main types, fluent and non-fluent. For reasons which will become apparent, they are also known as Wernicke’s and Broca’s aphasia.

In non-fluent, or Broca’s, aphasia the person has a marked problem with speech production. Speech rate is slow, and the articulation of speech is labored and distorted. Speech lacks its normal intonation contours, being instead pronounced in rather a monotonic way. The typical feel of non-fluent aphasic speech is given by a sample from an individual in (1). The person was attempting to explain that he had come to the hospital for dental surgery. The dots indicate long pauses.

The above sample of non-fluent aphasic language is similar to and differs from normal language use in a number of ways. First, all the key referring words (the people involved, places and times, doctors, hospital and teeth) have been appropriately selected. Thus there is no apparent deficit in selecting the correct referring words on the basis of their meaning. These are all nouns, however; there are no verbs. More generally, there is no evidence of words being glued together into higher structures like clause complexes (cf. sentences) or phrases.

People with non-fluent aphasia can generally pick out the picture corresponding to (2a) or (2b) correctly. It might seem that the difference between (2a) and (2b) is purely syntactic; the words are after all the same in each case. Thus people with non-fluent aphasia seem able to use syntax in understanding if not in production. They can also correctly identify the picture associated with (2c) and (2d). Sentence (2d) is passive; this means that the usual generalization that the first thing you come across is the subject and the second one the object does not hold in this case. Again, the fact that people with non-fluent aphasia often get the right meaning suggests that they are using syntax. However, in (2a) to (2c), you can get the right meaning simply by assuming the first thing you come across is the agent or doer. In (2d), you can guess the correct meaning simply from the individual meanings of the words present; flowers can’t water a girl, so the correct meaning has to be the other way around. Thus, you could get (2a) to (2d) correct without really using any sophisticated syntax, but just by general reasoning from the words present.

Sentence (2e) is different. Using the principle of subject first is a red herring, since it would lead you to assume that the dog was the chaser not the chased; and, unlike (2d), either assignment of roles is plausible. The only way you can tell which meaning is intended in (2e) is by applying a syntactic analysis. People with non-fluent aphasia are poor at interpreting sentences like (2e). They tend to get the roles the wrong way around. In a similar way, people with non-fluent aphasia are fine with (3a), but poor with (3b).

Once again, the explanation must be to do with syntax. In (3a), the subject of the verb to push is the man, which comes before the verb, so even though the sentence is moderately complex, the agent is coming first. In (3b), the man is the object of the verb to push; at some more logical level, the sentence means something like The woman pushed the man and that man was old. This logical meaning in (3b) can only be extracted by a syntactic analysis, because the linear order of the words is not the same as their logical order in the meaning. 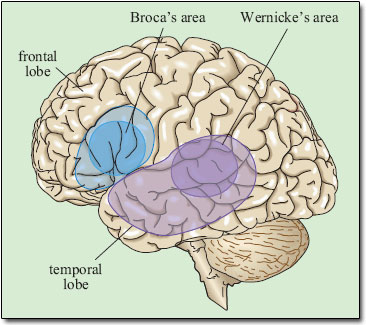 Broca’s area seems especially involved in the syntactic analysis of a sentence. (It may also have other functions to do with the production of speech, which is why articulation in people with Broca’s aphasia tends to be distorted.)

In stark contrast to non-fluent aphasia is fluent aphasia. In fluent aphasia, the person has very obvious comprehension problems. They make semantic errors with words, such as pointing to their ankle when asked to point to their knee. By contrast, the articulation, intonation and fluency of speech sound normal. For this reason, fluent aphasia was initially thought of as a disorder of comprehension rather than of production. However, linguistic output is far from normal, as illustrated by (4), the description of a picture by a person with fluent aphasia.

If we compare and contrast the language of (4) to the language of the non-fluent person in (1), we see that – unlike (1) – the fluent person’s output is in full sentences, with verbs as well as nouns. There is evidence of grammatical relations; for example, ‘is working’ is inflected to agree with ‘mother’. The non-fluent sample was economically worded but informative, since all the key elements were specified. Here the speech is fluent but the information content is very low. This is because the words selected tend to lack concreteness and specificity of meaning (‘working her work’ rather than what she is actually doing; ‘the other part’ rather than the exact place). At other times, it seems that the wrong content words have been selected, and as a consequence the sentence is uninterpretable (‘One their small tile into her time here’).

From the above, we can determine which aspects of language processing are impaired in fluent aphasia. We see that syntax is generally unaffected. There seems to be a specific deficit in semantics. That is, there is trouble hooking the concrete meanings of words, especially nouns, to the objects to which they refer.

This view is reinforced by the fact that fluent aphasia can often be linked to another condition known as anomia. Anomia is a deficit in accessing the names of objects. It can take several forms, including the inability to give the name of an object when confronted with a picture of it, or the inability to find a name from a description or definition. One of the most striking discoveries about anomia is that the impairment can be specific to particular categories of things.

There are many individuals who have trouble retrieving abstract names, like supplication, pact or culture, whilst still being able to find relatively concrete ones like cheese or thimble. This is perhaps not surprising; the abstract meanings tend to be rarer, more complex, and learned later in life, so they might be expected to be the first ones abolished by brain damage. What is striking is that there are also people in whom the pattern of preservation is the other way around. Some examples of the definitions that this second group of people volunteer are given below in Table 1.

Table 1: Definitions of abstract and concrete words produced by people with a superiority for abstract words

The people here clearly have real trouble with the meanings of things that are based on concrete sensory (visual, touch or taste) properties, whereas they have no trouble with meanings that are expressible entirely in terms of other words. There are people in whom the impairment is even more specific. There are individuals who have trouble finding the names of living things, but are fine with manufactured objects such as tools, and there are other people with the opposite pattern.

How are we to interpret the loss of concrete word meaning in fluent aphasia and anomia? The best explanation is that there are neuronal circuits somewhere that carry the meanings of individual words by connecting the cells that respond to the phonological shape of that word to other cells which represent its non-linguistic attributes such as smell, color, taste and so on. These circuits appear to be disrupted in fluent aphasia. In that disorder, the machinery of language is all working but it is not anchored to the concrete, non-linguistic meaning of nouns. These word-meaning circuits clearly have some functional specialization within them, so that the area that represents living things is different from that which represents manufactured objects, which is different again from that which represents abstract concepts.

Damage in fluent aphasia is generally located in the vicinity of Wernicke’s area, near the junction of the temporal and parietal lobes. Anomias for various types of nouns are generally a consequence of bilateral temporal lobe damage. From this we conclude that the posterior and temporal parts of the language areas are specialized towards the linking of particular words to their concrete meanings. The distinction between living and non-living things probably arises as a consequence of the different modalities we use to identify them. Living things are generally distinguished by their perceptual, particularly visual, properties. A ‘thing’ being an elephant is related to the way it looks. The circuits associated with anomias for living things are down in the temporal lobe, adjacent to circuits from the visual system that we know are involved in identifying objects. Non-living things, like tools, are more defined by what we do with them (a saw is for cutting wood). It is likely that the circuits for the meanings of these words are hooked up to motor circuits for performing the related actions.

Anomia, as described here, is a problem with nouns in particular. There are word-finding difficulties associated particularly with verbs, too. They are more particularly associated with frontal lobe damage and non-fluent aphasia. This is a satisfying finding. Verbs are much more syntactic words than nouns. They do not have meaning outside of sentences in quite the way a concrete noun can have, and they are intimately tied up with the creation of sentences, the assigning of subject and object roles and so on. Thus this finding generally supports the view outlined here that sentence processing has a more anterior basis, and individual word meaning has a more posterior one.

Saffran, E. M. and Sholl, A. (1999) ‘Clues to the functional and neural architecture of word meaning’, in Brown, C.M. and Hagoort, P. (eds), The Neurocognition of Language, New York, Oxford University Press.

This article is adapted from ‘From sound to meaning: hearing, speech and language ’. An OpenLearn (http://www.open.edu/openlearn/) chunk reworked by permission of The Open University copyright © 2016 – made available under the terms of the Creative Commons Licence v4.0 http://creativecommons.org/licenses/by-nc-sa/4.0/deed.en_GB. As such, it is also made available under the same licence agreement.