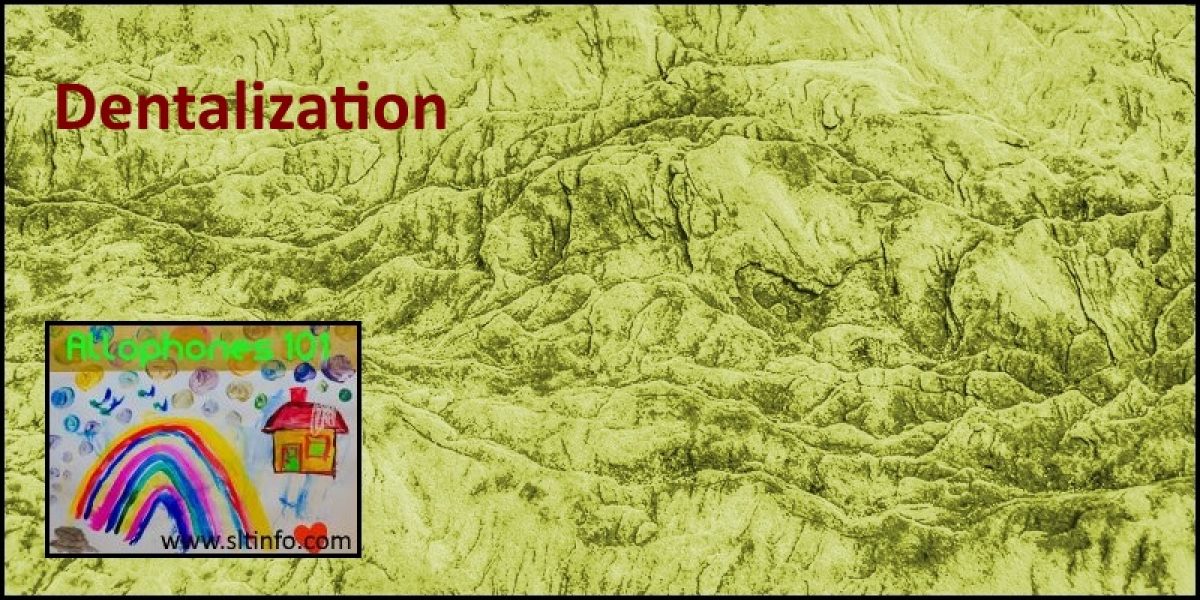 We have seen (see Plosives) how the plosive sound /t/ is articulated with the tongue tip contacting the alveolar ridge, i.e. it is an alveolar plosive. Whilst this is the predominant place of articulation, consider the placement of the tongue tip in the word eighth /eɪtθ/. In this instance, the tongue is not raised to the alveolar ridge but is brought into contact with the back of the upper incisors. In other words, it is dentalized, being produced in the same place as the dental fricative /θ/ it precedes, i.e.

This example amply demonstrates the dentalization of /t/, here represented as [t̪]. However, as the voiceless alveolar plosive does not follow /s/ it will also be aspirated in this context. Consequently, the full representation of this phonetic variation is as follows.

The voiced counterpart alveolar plosive /d/ is similarly dentalized when it appears before a dental fricative, e.g.

We can conclude, therefore, that the phoneme /d/ has at least three allophones: [d], [d̥] and [d̪].

Only alveolar sounds are dentalized when they appear before a dental fricative. The remaining alveolar sounds of English are the nasal /n/, the two fricatives /s/ and /z/, and the approximants /r/ and /l/. Of these, only /n/ and /l/ can appear before a dental fricative in British English and each may be dentalized. [In reality, there are actually very few examples of English words that contain an alveolar immediately before a dental sound. However, this principle of the dentalization of alveolars is a common feature of connected speech, which will be discussed later.]

As indicated above, only alveolars are dentalized before a dental fricative, and the only alveolar nasal is /n/. Two examples follow.

The non-dentalized allophone [n] occurs in words such as no [nəʊ] and can [kæn]. Thus, the phoneme /n/ has at least two allophones: [n] and [n̪].

As pointed out already, the only alveolar approximant to undergo dentalization before a dental fricative is the lateral /l/, e.g.

This example demonstrates the dentalization of /l/ very well. However, we must also take account of the fact that the /l/ appears before a consonant. Consequently, the /l/ is also velarized. The complete representation of this allophonic variation, therefore, is as follows.

We may now conclude that the phoneme /l/ has at least four allophones, [l], [l̥], [ɫ] and [ɫ̪]. In fact, this is the total number of allophones for this phoneme in English, no more are to be found.