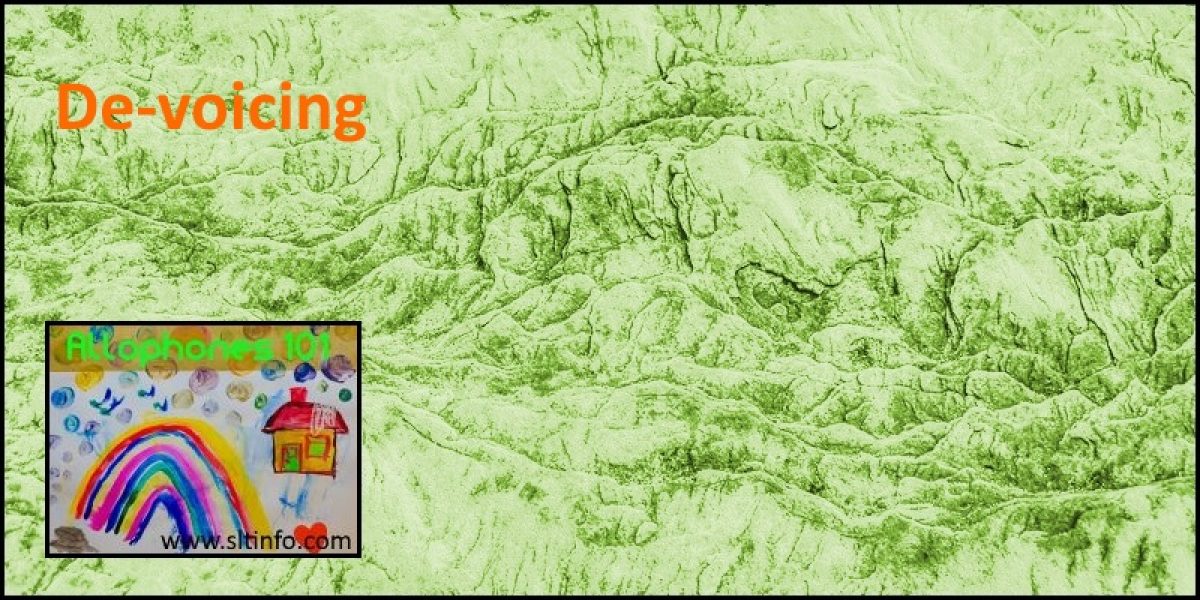 Consider how the voiced bilabial plosive /b/ is articulated in the word ball /bɔl/. You will probably need to say it aloud to both hear and feel the effect. Now try saying aloud the word nib /nɪb/, again focusing on the phoneme /b/. Do they sound the same? For most speakers, the /b/ at the beginning of the word ball /bɔl/ is fully voiced – it is a strong sound. However, the /b/ at the end of the word nib /nɪb/ is typically less forceful – it is not fully voiced. This phonetic realization is referred to as being de-voiced and this de-voiced allophone of /b/ is represented symbolically as [b̥]. We can say, therefore, that /b/ has at least two allophones, [b] and [b̥].

Of course, only voiced consonants can be de-voiced and the remaining two voiced plosives /d, g/ are similarly de-voiced in word-final position, e.g.

As we have seen, the voiced post-alveolar fricative /ʒ/ typically occurs intervocalically in English. Exceptionally, when it does occur word-finally in loan words it may also be subject to de-voicing, e.g.

There are, however, only a handful of words where /ʒ/ occurs in word-final position and so the frequency of occurrence for de-voicing of the post-alveolar fricative is extremely low.

As we know, there is only one voiced affricate in English, the voiced post-alveolar affricate /ʤ/. As with plosives and fricatives, this affricate is also de-voiced in word-final position, e.g.

Of the four approximants, only the liquids /r/ and /l/ show any appreciable de-voicing in particular contexts. There is a de-voiced allophone of the phoneme /r/ which occurs after the voiceless consonants /p, t, k, f, θ, ʃ/. It is represented symbolically as [ɹ̥] and occurs in words such as the following.

The fully voiced allophone is represented symbolically as [ɹ] and this occurs elsewhere, e.g.

The fully voiced allophone [l], however, occurs before vowels, e.g.

Consequently, the phoneme /l/ has at least two allophones: [l] and [l̥].