You are here: Home > Grammar > Adjectives 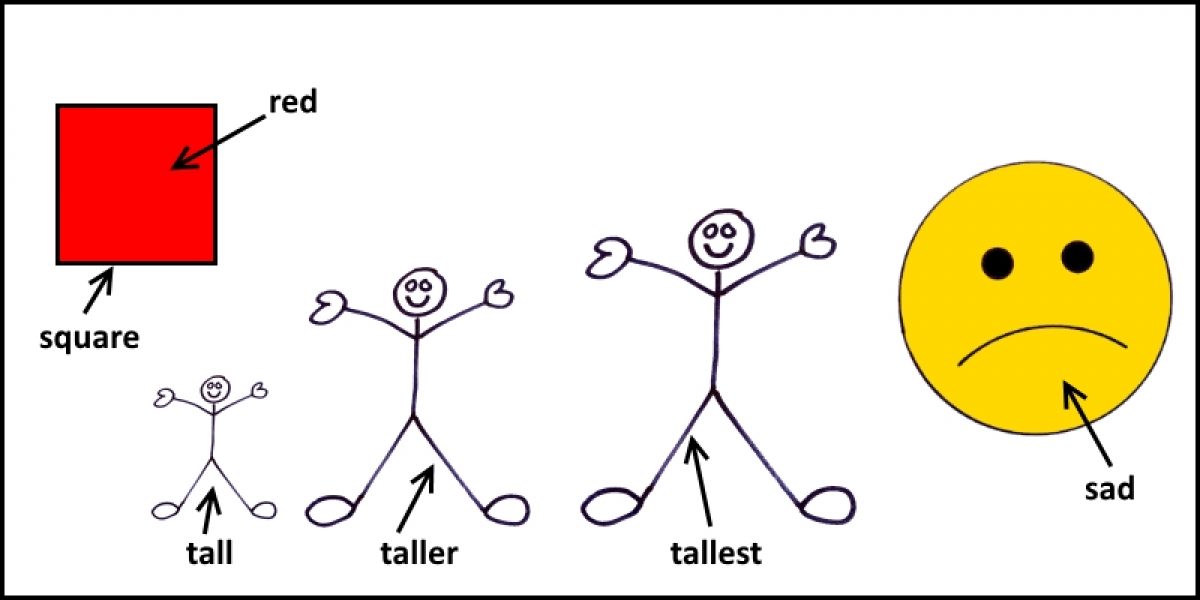 Like lexical verbs, nouns and adverbs, adjectives constitute an open class of words, i.e. the number of adjectives can increase as people either invent new ones or reclaim old ones that have fallen into disuse. Some relatively recently added adjectives in English include:

Adjectives are typically characterized as descriptors. This is because they most commonly qualify nouns (or pronouns) by providing additional and specific information that describes, identifies or quantifies the noun. They may be used in a variety of ways but the two most common are: (1) before a noun, and (2) the use of the copula.

Adjectives frequently occur immediately before a noun (or pronoun) in English, as in the following example.

In this utterance, we can see that the adjective small qualifies the noun that it precedes. In other words, it provides a more specific description of the following noun. We now know what sort of house is being referred to, i.e. it is a small house. The adjective, therefore, qualifies the noun house. It provides additional descriptive information that explains more fully the sort of house that is being referred to. We are able to infer that the house is not a big house because the additional information provided by the adjective indicates that it is a small house. Consider the next example.

Again, we see that the adjective precedes the noun. Once more, it serves to qualify this noun. In particular, it tells us something about Helen’s brother’s emotional state. We now realize that Helen’s brother is happy. In summary, adjectives provide additional descriptive information by qualifying nouns. The nouns may be qualified in a variety of ways. For example, an adjective may tell us something about the shape of an object (round, square, flat), its size (big, small, tiny), its color (red, yellow, blue), its emotional state (happy, sad, anxious), its physical condition (cold, hot, wet), its position (left, right, central), and so on. Here are a few more examples.

Use of the copula

As well as occurring immediately before a noun, adjectives may also be joined to a noun by what is known as a copula. This is the use of verbs like be or become to join, or couple, the noun to the adjective. Consider the following example.

In this utterance, the adjective appears at the end but serves to provide additional descriptive information about the preceding noun Kathryn. The noun and the adjective are coupled together through the use of the copula is, derived from the verb be. We now, therefore, understand something more about the type of person Kathryn is, i.e. that she is lovely. Other examples of adjectives combined to nouns by the copula are as follows.

Dynamic adjectives signify attributes or characteristics that can usually be controlled by the person/animal/etc possessing them. So, for example, I can actively choose to be careful, rude, or quiet (but probably not choose to be white, tall or rotund). Since such dynamic attributes can be directed as necessary, they can be used in imperative structures, e.g.

In addition, according to the rules of English syntax, dynamic adjectives can be inserted into a be + –ing structure, e.g.

She is being careful.

The doctor was being rude.

Are they being quiet?

Additionally, unlike dynamic adjectives, they cannot be used in be + –ing structures, e.g.

* She is being white.

* The doctor was being tall.

* Are they being rotund?

We have seen that adjectives qualify nouns, i.e. they describe qualities of nouns. Some of these qualities can vary in intensity, e.g.

We see, therefore, that some adjectives (such as cold, bright and fast) can be graded, i.e. they are gradable.

As we see in the examples immediately above, gradable adjectives can be modified by so-called grading adverbs (also commonly called ‘intensifying adverbs‘) that indicate the intensity of what the adjective is referring to, e.g.

The majority of adjectives are gradable and, therefore, most can be modified by grading adverbs.

Gradable adjectives can also assume a comparative or superlative form.

When we compare two things we can use comparative adjectives to signify a difference between them, e.g.

Graeme’s refrigerator is cold but Craig’s is colder.

That bulb is bright but this one’s brighter.

The car is fast but the train is faster.

When we describe the extreme quality of one thing in a group of more than two we use the superlative form, e.g.

Graeme’s refrigerator is cold, Craig’s is colder but Margaret’s is the coldest.

That bulb is bright, this one’s brighter but the one over there is the brightest.

The car is fast, the train is faster but the plane is the fastest.

Coldest, brightest and fastest are, therefore, all examples of superlative adjectives.

In contrast, some qualities cannot usually vary in intensity, e.g.

Consequently, some adjectives (such as dead, pregnant and impossible) cannot be graded, i.e. they are non-gradable.

Sometimes a distinction is made between adjectives that describe an inherent property of a noun and those that do not.

Inherent adjectives describe some inherent or intrinsic quality of a noun, e.g.

There is a direct characterization of the noun: the bike itself is new; the bench is made of wood – hence it is actually wooden; the plate is manufactured from paper – it is actually a plate made of paper.

In contrast, non-inherent adjectives do not directly characterize a noun, e.g.